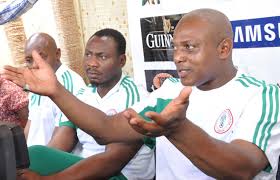 Didn’t anyone inform our Coach Stephen Keshi, that Nigerians sent a memo to the Eagles throughout the 90 minutes of play that read, “We need to beat Iran”? Nigeria’s World Cup hopes hangs in the balance after an unsatisfactory performance against Iran in their opening game.

While credit should definitely go to the Iranians, most especially Dejagah, for their consistent defensive play (after all they are Asian champions), they gave the Nigerian defence nothing to worry about for most of the game.

With 63 percent of the possession, the Eagles were expected to overrun their opposition but with misplaced passes, poor corner kicks and lack of cohesion in the final third largely at play, they couldn’t perform against the lowest ranked team in Brazil. Handed two tough matches in this group, they needed to get three points and a good goal difference against Iran.

There was an overall lack of vitality or energy about the performance, and with Argentina and Bosnia-Herzegovina lying in wait, it becomes difficult to imagine how they will manage to escape from Group F.

When Godfrey Oboabona was down on the pitch, we had a lot of fans praying that it was nothing too serious because the bench wasn’t looking too good in terms of replacement. Now with our first choice center back defender out, Stephen Keshi has another issue to deal with before the Super Eagles meet Dzeko and friends on Saturday.

Stephen Keshi received great praise for his tactical work during South Africa 2013, but faced with a resolute and organised defence—as Iran certainly were under Carlos Queiroz—he was clueless on the approach to take.

The main issue here boils down to his squad selection from the 30 man list to the 23 in Brazil. How does he justify taking only five midfielders to a tournament like the world cup? Who does he expect to create for the front three? His starting trio of John Obi Mikel, Ogenyi Onazi and Ramon Azeez, who were disappointing or a Reuben Gabriel who was left on the bench?

It was baffling to see Keshi remove Victor Moses, a player who has been so effective in troubling stubborn defenders since he made his international debut and replaced him with Shola Ameobi. Shola, who we know struggles to make his impact in any game and has only scored five goals in the last 3 premier league seasons.

Questions should also be asked of how he will justify his selection of Micheal Babatunde and Uche Nwofor if he doesn’t trust them enough to play against the erstwhile “whipping boys” of the group.

I remember in South Africa, the absence of much inspiration and fire power in the team (as we see now) brought Sunday Mba into limelight as he took it upon himself to literarily win the Nations Cup for Nigeria. He sadly joins the list of players who were dimmed unworthy to make “the team”.

It is however too late to cry over spilled milk, Bosnia poses an obstacle that only shear will, the desire to perform and make a name for themselves can motivate the Eagles to perform. How Keshi will get his boys inspired to get the job done, we do not know but the message we are sending out is- “come Saturday Super Eagles should make us smile with a win.”