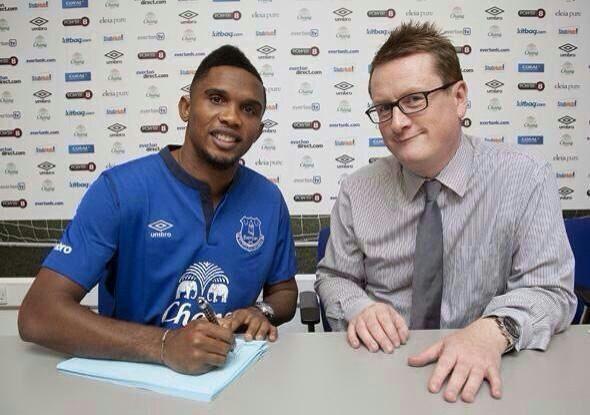 Everton FC has announced the signing of the 33-year-old Cameroonian striker on a two-year deal.

Eto’o was released by Chelsea FC earlier this summer. On his joining the new club, he said, “Officially an Everton player…!!! Let’s get ready for a new and ambitious Challenge!!!”

Officially an @Everton player…!!! Let’s get ready for a new and ambitious Challenge!!! pic.twitter.com/mDYn0R5XFy

On Everton’s official website, coach Roberto Martinez said;
“I met him and we had a very good chat about football in general and I was impressed about the hunger he still has.

For someone who has achieved nearly everything, he still has the desire he had at 15 when he went to Spain and showed what he could do. For many reasons he has got a point to prove.

We are very excited and I think Everton is the perfect home for him. The fans will make him ready and feel sharp but we have got to be a bit patient with the fitness levels and make sure he is back to his best.”