MTN #AfricaAgainstEbolaCampaign: What Next After The Scourge? 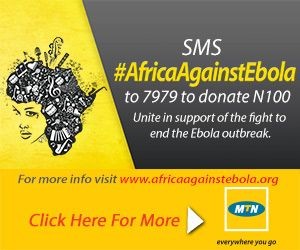 The dictionary defines a virus as an infectious microorganism that replicates only inside the living cells of other organisms and can infect all life forms. Taking this definition for granted, West Africa and indeed the world, responded nonchalantly and indifferently to the first outbreak which was announced in March, 2014.

This indifference, led to the deaths of over 15,000 people in West Africa alone. Countless lives have been lost in Guinea, Sierra Leone, Liberia and Nigeria. Could this have been avoided if the West had considered intervening in the struggle to eradicate the virus? There are too many “maybes,” “ifs” and “perhaps.” Too many chances that weren’t taken, and too many lives that have been lost irreverently.

History records that from times past, Africa has always been the subject of woeful Western tales. They have not only equated Africa with everything bad but have also ‘supposedly’ traced the origins of practically every deadly disease to the continent without substantial evidence. Not knowing what to do, and having no way to fight against such blatant labeling; Africa has had to shoulder this responsibility. It was thus with great joy, relief and indescribably pride that Nigeria publicly defeated the Ebola virus. The West was left to shamefacedly admit defeat, declare Nigeria Ebola-free, and in the same breath, ask for assistance.

Thus, the African Union, with the help of trusted and socially responsible public and private sector companies in the continent, have come together to form the Africa Against Ebola Solidarity Trust. After all, who else knows if the shoe fits other than he who wears it.

Would you like to be part of the Trust? Donate by sending Stop Ebola to 7979 on your MTN line. You will be saving a life and being an integral part of Ebola eradication in Africa.