Regina Askia asks 'What is the difference between South Africa's xenophobia and Nigeria's law against homosexuality?'

Former beauty queen and former Nollywood actress Regina Askia took to her Facebook wall earlier to talk about the fact that a lot of awareness was raised against the xenophobic attacks in South Africa while it wasn’t the same for the homosexuality bill passed in Nigeria a few months ago.

She asked ‘What is the difference between South Africa’s xenophobia and Nigeria’s law against homosexuals?’ 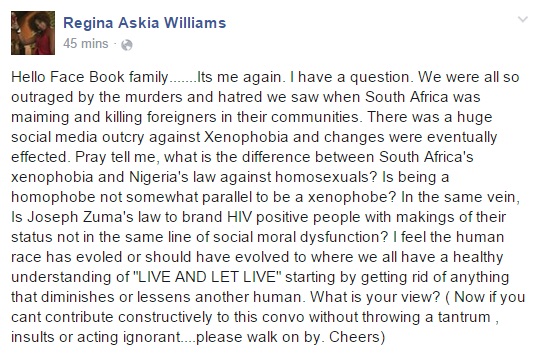 Related Topics:Regina Askia Williams
Up Next

Pulse TV asks “What If You Find Out Your Husband Visits A Brothel?”| Watch