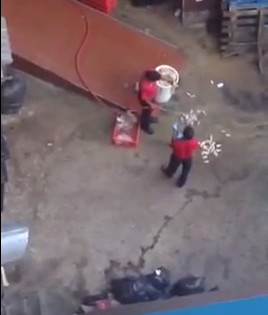 A video of KFC workers in South Africa washing chicken on the floor has sparked public outrage.

The incident occurred at the fast food branch in Braamfontein.

Here is the video:

KFC chief executive Jason Kerr told The Star on Monday morning during a visit to the affected branch in Braamfontein that the chicken pieces formed part of the raw wastages and was to be thrown away.

But he said employees at the outlet on the corner of Biccard and De Korte streets took the affected chicken pieces that were not perfect for consumption to the back of the store to remove the breading.

Breading of the chicken refers to the process of coating it with flour and their secret blend of herbs and spices.

Kerr said the employees did this because they feared management would discover that they breaded the chicken after it was identified as being “imperfect”.

Although the incident has damaged the food outlet’s brand, Kerr was adamant that the employees in question only violated a minor regulation and did not harm the consumers.

“The team members are not to blame because no harm was done to the consumers.”

The employees have not been suspended following the incident but will undergo a hearing.

The store has also been reopened following the closure on Friday.