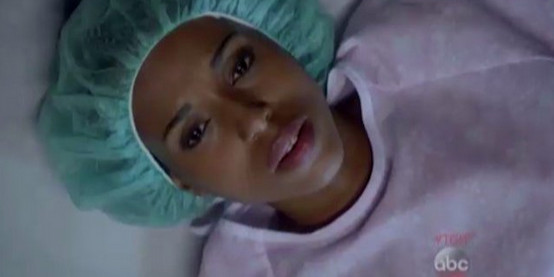 *Spoiler Alert*
Please stop reading if you do not want to know what happened in last night’s episode of “Scandal“.

Hands up, who watched “Scandal” last night? We know many BellaNaijarians are hooked on the show which features Kerry Washington in the lead role.

Here is what happened…One of TV’s favourite heroines Olivia Pope had an abortion.

We never had a clue that Olivia was even pregnant and BAM, she was suddenly having an abortion.

The episode has divided Scandal fans. Some applauded the “realness” of it while others slammed it for promoting abortion.

“Tonight, the millions of people who tune into Scandal every Thursday night learned that our rights to reproductive health care are under attack. Never one to shy away from critical issues, [showrunner] Shonda Rhimes used her platform to tell the world that if Planned Parenthood lost funding for contraception counseling, STI testing, cancer screenings and safe, legal abortion – millions of people would suffer. And this episode wasn’t the first time one of Rhimes’ characters had an abortion, yet tonight we saw one of our favorite characters make the deeply personal decision that one in three women have made in their lifetime. We applaud Shonda Rhimes tonight – and every Thursday night – for proving that when women are telling our stories, the world will pause and watch. We just hope those in Congress – and throughout the nation – who are steadfast on rolling the clock back on reproductive health care access are taking note.”

“Hollywood’s liberal values permeate movies and television. Last night’s episode of ABC’s Scandal was pretty much an hour-long advertisement for Planned Parenthood. In the most disturbing scene, the main character has an abortion to ‘Silent Night’ (a hymn celebrating the birth of Jesus) playing in the background. This is Hollywood’s moral depravity on full display.”

We also had a chat with 2 BellaNaijarians on opposite sides of the debate and here is what they said;

Against
I am quite liberal but I was disturbed by last night’s episode. Olivia Pope is a grown woman who should have been responsible enough to use contraception such as the pill, condoms or even the morning after pill if she slipped up. I found it very distasteful that she had an abortion for no concrete reason. If she was sexually assaulted or if she was a confused teenager, I may understand but this just seemed like gratuitous liberal promotion of abortion.

For
While we may not have official statistics like they do in the USA, I know that millions of Nigerian women have had abortions. Seeing it on screen shows women who have been in the same position that it is not a taboo. We have a right to choose.

***
We will love to hear your thoughts.

Kylie Jenner & Tyga have Broken Up