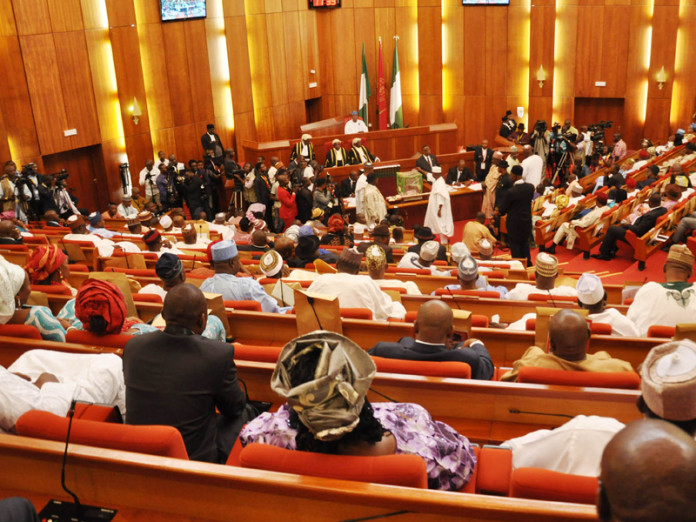 The bill to Amend the Act establishing the Code of Conduct Bureau has passed the second reading in the Senate house on Thursday with some senators, led by Senator Solomon Olamileka Adeola (APC, Lagos West) staging a walkout in protest of the development.

Adeola shared the following message on his Facebook page:

I am sure many of you have read that the bill to amend the Code of Conduct Act passed second reading today on the floor of the Nigerian Senate, with deputy senate president Ike Ekweremadu presiding.

Even though the majority in senate will always have its way, I and my constituents in Lagos West Senatorial District are not in support of the amendments to the Code of Conduct Act CAP C15 LFN 2004, which was sponsored by Senator Peter Nwaoboshi.

I and some of my colleagues stepped out in opposition to the amendments.
#Yayi #LagosWest #Senate #YayiAdeola

Recall that the bill which was sponsored by Senator Peter Nwaoboshi (PDP, Delta North) passed first reading on Tuesday. (Click here if you missed it).

It is clear that the act does not contemplate criminal trial so the usage of criminal procedure act and the criminal procedure code should not be used as a procedural template in the tribunal. In due course, I will present to this distinguished senate a comprehensive amendment of the third schedule to the Code of Conduct Bureau and Tribunal rules of procedure which should be distinct rules for proceedings in the Code of Conduct Tribunal.

The amendment was very apt as it had become clear that the CCT was delving into criminal trials. Section 3b stipulated that before a prosecution can start, the person in question would have to be communicated and he must respond to the bureau.

After investigation by the bureau, they will transfer for prosecution. It is stipulated that you must have a minimum of three judges before they can sit, but as it is today, we have two judges yet trial is ongoing. When the two judges take different positions, what happens?

The bill was then referred to the Committee on Ethics, Privileges and Public petitions and its Judiciary and Human Rights counterpart after the Senators voted for it’s passage for second reading.

LASG to construct additional Pedestrian Bridge in Ojota within 3 months