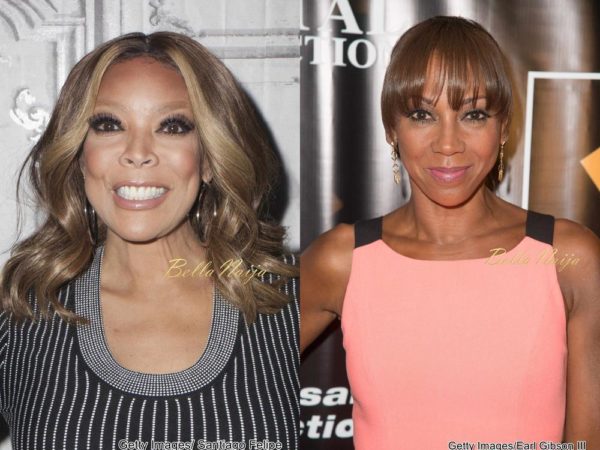 There was some “shade” thrown on Friday edition of  ‘Wendy Williams Show’  and Actress, Holly Robinson Peete has come out to address it.

Wendy Williams was discussing rumors of Victoria Beckham and David Beckham getting a reality show and she was of the opinon that it wasn’t the best idea because the “bar has been set so high” and people “like to see dysfunction and fighting and discourse.”

She then moved on to  Holly’s newest reality show titled ‘For Peete’s Sake’.

“Holly, Rodney, You know I love you Peetes. I tried but I got to tell you something. There’s no place on TV anywhere it seems for shows like this,” she explained. “The bar has been risen. Ms. Peete is 80 years old, she’s dating, she’s cute but no one cares.”

“Holly’s got the cute kids with Rodney. They’ve been married forever, but I don’t think people care,” she continued. “That’s sad for us, for TV watchers. Not for people who try to keep it together and be family and be good examples. That’s all.”

Holly went on to Twitter to reply Wendy and express her views:

“Dear @WendyWilliams #ForPeetesSake is resonating deeply esp w special needs #autism families. I know positivity isn’t your thing but it’s OK,” she tweeted. “If u think #ForPeetesSake’s only about cute kids n 80 year mom dating then u didn’t watch it. spraying #shade repellent on you.”

She cryptically added, “When negative people try to pointlessly attack your positivity it’s only a sad commentary on their own inner darkness. Amen? #ForPeetesSake.”

@WendyWilliams oh no, no, no! We don’t throw shade at my girl @hollyrpeete or her family. https://t.co/7GFuEH8OxG! #ForPeetesSake