"Why didn't I get a phone call for using my naked wax figure?" Amber Rose Slams Kanye West Over "Famous" Video + Sides with him in the Taylor Swift/Kim Kardashian Drama 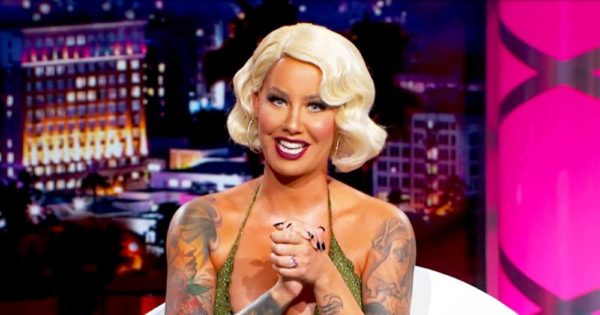 Muva over, Amber Rose is coming in hot!

The show host surprised fans during her talk show on Friday, July 22nd when she sided with her ex-boyfriend Kanye West amid his most recent feud with Taylor Swift.

Although she declared herself officially #TeamKimye, she didn’t let her ex — who has publicly bashed and shamed her before — off the hook.

“I want to talk about Kim and Kanye’s Snapchat,” Rose said during her new VH1 show, before explaining how Kimye put Swift on blast over the song “Famous” last weekend.

“I’m not the biggest fan of Kanye, But I will say this: I was next to him at the VMAs that year and … I remember the repercussions after that. I remember Taylor’s mother and father coming up to us and saying, ‘One day, Kanye, you’ll have a daughter and somebody is going to do that to you.’ He was so remorseful” she recalled Swift and West’s infamous 2009 VMA moment. “I mean he really felt so bad, because it wasn’t about Taylor. It was about Beyoncé and her video … he didn’t want to interrupt Taylor – he didn’t even know who she was at the time.”

Rose explained that West learned his lesson back in 2009 and that he would never try to initially hurt her again.

“It was just a very hard time for him,” she recalled. “I watched people say that they did not want to work with him anymore because of it. … I know that Kanye would never ever go through that again by not calling Taylor and say, ‘Heads up, I’m about to go write this verse real quick. Just wanted to make sure you’re cool with it,’” Rose said. “I know that about Kanye.”

Rose then reverted back to her sassy self and took a minute to address the latest issue she has with the rapper:

“So, I say all of that to say: Why didn’t I get a phone call for using a naked wax figure in your video, Kanye?” Rose said to the camera, referring to West’s controversial “Famous” music video, which features a bevy of famous faces naked in bed with the musician. “I mean, Taylor gets a call but I don’t get a call. … Please stay the f–k out of the news so I don’t need to talk about your ass anymore.”