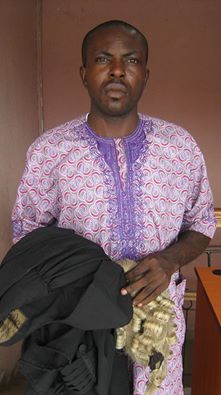 The Economic and Financial Crimes Commission (EFCC), says it has arrested one ThankGod Okachi Echem it described as a fake lawyer for defrauding his client of N7m in Port Harcourt.

This is contained in a statement issued by Wilson Uwujaren, the commission’s Head of Media and Publicity, in Abuja on Monday.

Uwujaren said Echem, who confessed to being a school certificate holder, was arrested following a petition to the EFCC by one of his clients, Jonny Wali.

“Wali alleged that the fake lawyer defrauded him of seven million, being part of the money awarded him by a Rivers State High Court in Port Harcourt.

He added that the company, however, failed to pay the compensation to him.

“In seeking payment of the money, Wali employed the legal services of ThankGod Okachi Echem and Felix Agbarake.

In 2015, the court ruled in his favour and granted him N8m as the accumulated interest on the N10m.

he sum of N18m was consequently paid by the electricity company to him through Echem’s chambers,” Uwujaren said in the statement.

He said trouble crept into the matter when Echem, who was later found to be a fake lawyer, connived with his colleague and opened an account with a first generation bank.

“The account was opened in WalI’s name without his consent. N7M was paid into it and cashed (withdrawn).

When Echem was confronted with these facts, he confessed that he was just a school certificate holder posing as a lawyer.

A search was conducted in his house and yielded some incriminating documents including a wig and robe belonging to ThankGod Okachi Echem,” Uwujaren said.

He said Echem and “his professional colleague” Agbarake, would be arraigned soon.