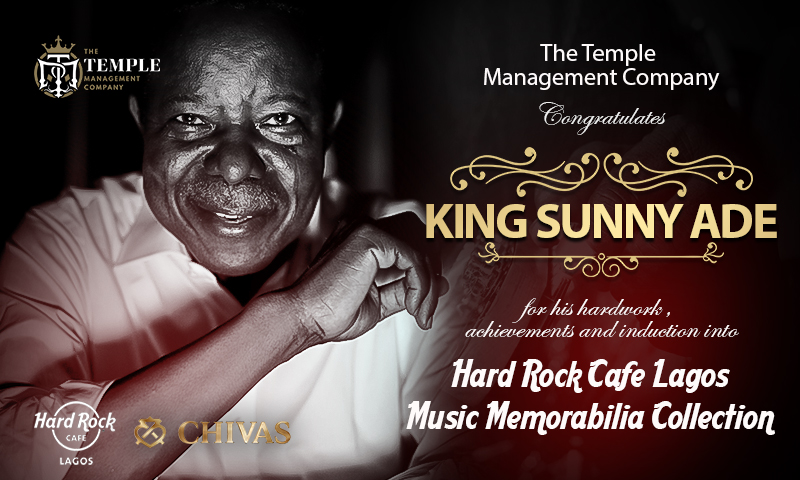 Scheduled to hold at Hard Rock Cafe, Oniru, KSA as Sunday Adeniyi Adegeye is fondly called will donate rare items from his collections including a vintage Fender Guitar, shoes and album cover.

To commemorate the induction, Chivas will present King Sunny Ade with a Chivas Regal 25 Year Original Blended Whisky; and create a signature drink for KSA, which will debut, and be served as cocktails at the induction.

Temple Management Company’s Head of Entertainment, Mark Redguard said, “With the induction, King Sunny Ade will now rank among other Hard Rock world greats whose music paraphernalia dots the walls of the franchise business across the world.”

Other greats who are on the Hard Rock showcase include, The Beatles, The Rolling Stones, Jimi Hendrix, Michael Jackson, Elvis Presley, Brian Wilson and Elton John among others.

After he first encountered music at the age of 12 in 1958 at Osogbo, Osun State, KSA has risen to global recognition with two Grammy-Award nominations and three Hollywood movie features and hundreds of recordings, which includes international collaborations.

An Evening of Innovation with Twinpine – Personalisation, Performance and Convergence to Drive Marketing Communications in 2017