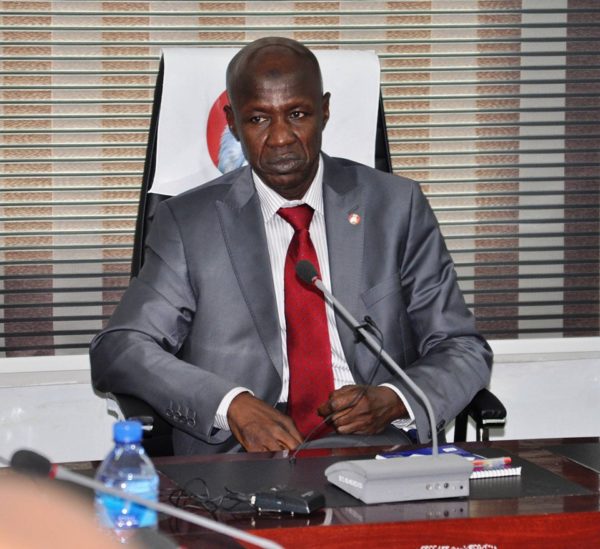 The Senate on Thursday declined to confirm Ibrahim Magu as the substantive chairman of the Economic and Financial Crimes Commission (EFCC) following what it called a “security report” before it.

According to the report, which was sent to the Upper Chamber from the Department of State Security (DSS), Magu had close ties with a retired naval officer, who the DSS described as a “questionable businessman who has subsequently been arrested by the secret service.”

PREMIUM TIMES has obtained details of the security report on which the lawmakers based their decision and has investigated the claims against Magu. According to a fact-check by the online medium, the allegations by the DSS are “untrue”.

ALLEGATION ONE: That during the tenure of Farida Waziri as EFCC chairperson, sensitive documents were found in Magu’s home.

The facts do not support that claim. A reporter for this newspaper extensively reported that event in 2008 when it happened, and is familiar with what transpired at the time.

Based on pressure from political gladiators of the period (among which were former Governors James Ibori and Bukola Saraki), then President Musa Yar’Adua unceremoniously removed Nuhu Ribadu as chairman of the EFCC.

After Ribadu’s departure, his successor, Waziri, frustrated some of his closest and most resourceful aides in the commission, and harassed them for prolonged period.

Magu, who was a chief superintendent of police at the time, was sent away from the EFCC and his Lagos and Abuja homes were raided by operatives even before he had the opportunity to hand over to Umar Sanda as head of the Economic Governance Unit of the commission. He was later detained for three weeks.

Following complaints by Waziri, the then Inspector General of Police, Mike Okiro, queried Magu, accusing him of serious misconduct. One of the allegations against him was that he removed and withheld EFCC files.

On August 25, 2008, Magu replied the query, explaining to the IGP that no unauthorized EFCC official documents were found in his home.

“I wish to state that the nature of my assignment at the EFCC is such that I worked round the clock and it was impossible for me to do my work effectively without working on some documents at home,” he wrote to Okiro at the time.

“This is the reason I maintain an office bag where documents relating to investigations were kept. The documents listed were found in my office bag which I was in the process of handing over and were not found hidden anywhere in my house.”

“It is therefore not the correct position to say that I bluntly refused to hand over EFCC’s property and documents. I had just concluded handing over the Abuja office and I was in Lagos to conclude handing over the Lagos office when the search was conducted. At the time of the search, I had not reported to my new command. It could therefore not be my intention to keep government documents in my house.”

“I have suffered untold humiliation within the past one month. My home was ransacked, vandalized and my properties destroyed by men of the EFCC. I was detained in a cell meant for hardened criminals most of whom are armed robbers for three weeks. My health condition deteriorated as a result of his inhuman treatment meted out to me for doing my job diligently and with the pride required of a senior police officer of my rank in the Nigerian Police Force.”

“I humbly implore the Inspector General of Police to totally exonerate me from blame and the said acts of serious misconduct because I was not involved and I am not involved. I will never be discouraged in my unrelenting war against crime and its associated manifestations as enshrined in the constitution of the Federal Republic of Nigeria,” Magu wrote.

After investigation, the police IG exonerated Magu, posted him to the police’s Special Fraud Unit and promoted him to the rank of Assistant Commissioner of Police shortly afterwards.

ALLEGATION TWO: That Magu currently occupies a residence rented for N40 million at N20 million per annum. This accommodation was not paid [for] from the commission’s (EFCC) finances, but by one Umar Mohammed, air commodore retired.

This claim is also untrue.

PREMIUM TIMES has obtained evidence showing the property in question was paid for by the Federal Capital Development Administration, and not Mr. Umar.

The E-Payment schedule, dated March 31, was issued by to the branch controller of Central Bank, Abuja, in favour of M/S Valcour SA Nigeria Limited.

The company was paid N39.628 million as payment for two-year rent and furnishing of the property, located in upscale Maitama district of Abuja.

The payment schedule was signed by Isiyaku Ismaila and confirmed by Zanna A. Hamza.

Magu lived in Karu, a suburb of Abuja, before his appointment as acting EFCC chair. With his new position, Magu moved into an official residence provided by the FCDA.

PREMIUM TIMES checks show that this is not entirely correct. Our investigations indicate that Magu first met Umar when both of them worked as members of the Presidential Committee on the investigation of arms procurement. At the time, Umar was very close to President Muhammadu Buhari and had unlimited access to the presidential villa. Both men became close during the assignment.

Our investigations indicate that once this year, Magu travelled to Kano in company of EFCC’s director of finance and that in charge of organizational support. Those familiar with the trip said on their way back to Abuja, Umar, who at the time remained Magu’s colleague at the presidential committee, and who was at the time not in any trouble with the SSS, gave the two officials a lift.

We are unable to find any evidence that Magu flew in Umar’s private jet at any other time. Neither were we able to establish that the EFCC chairman flew to Maiduguri alongside Umar and a bank MD being investigated by the EFCC over complicity in funds allegedly stolen by former Petroleum Minister, Diezani Alison-Madueke.

While some insiders at the commission denied the allegation, we could not independently verify the claims.

ALLEGATION 4: On 24 June, 2016, he (Magu) flew Emirate airlines first-class to Saudi Arabia to perform lesser hajj at the cost of N2.9m. This is in spite of Mr President’s directive to all public servants to fly economy class.

Insiders say while it was true that Magu indeed flew first class to Saudi Arabia for lesser hajj, he did not pay for the ticket with public funds. We could not however confirm this claim independently.

Calabar Carnival has Created over 15,000 Jobs Since Inception – Official