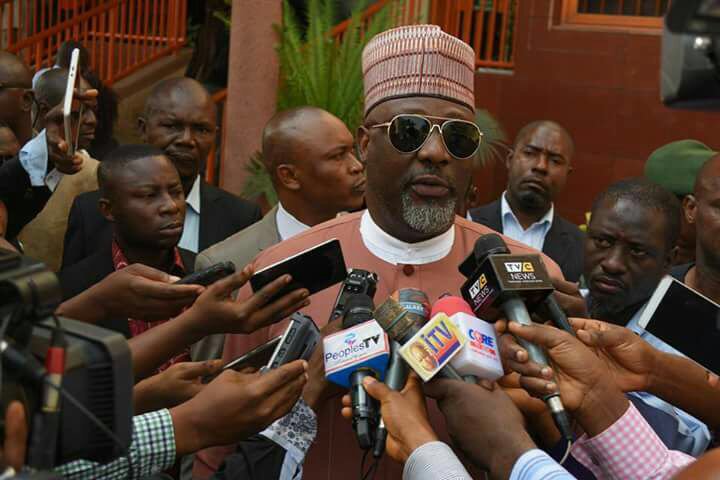 The Nigerian Senate in its session on Tuesday expressed disapproval over the Independent National Electoral Commission (INEC)‘s released schedule for the recall of Senator Dino Melaye.

The Senate described INEC’s action as a waste of time, saying the matter is going to be brought before it eventually, and it will be the one to determine if Dino Melaye has performed as a senator or not.

Dino Melaye had raised the issue during the session, restating his belief that signatories in the petition submitted to INEC included those of dead persons.

“As I speak to you, I have over 120 death certificates issued by the National Population Commission and these people’s relations and families have sworn to affidavits and these certificates have been deposited. The names of these dead people appeared on the recall register submitted to INEC.

Also, 116 of my constituents have sworn to affidavits that their names and signatures appeared in the recall registers and they were not the ones that signed it.

Also, 86 of my constituents have sworn to affidavits that they were approached that the government wanted to carry out a fertiliser empowerment programme and requested for their Permanent Voter Cards and thereby deceived them into putting their names in the recall register,” he said.

Deputy President of the Senate Ike Ekweremadu while speaking, accused INEC of not following the laid down procedures in carrying out the exercise, adding that the issue was not worth discussing.

“I am wondering why we are dissipating energy on this matter and wasting precious legislative time on a matter we should not.

What is happening in Kogi in respect of Senator Dino Melaye, as far as this Constitution is concerned, is an exercise in futility. They are just wasting precious time because the Constitution is clear on what should happen.

It is possible that the Attorney General of Kogi State has not advised them properly. If he has done that, I am sure they would have applied their time to more meaningful ventures in Kogi State.

The number of those who are seeking for recall of Senator Melaye from the Senate are supposed to line up somewhere in Kogi State with him and his lawyers, and each person will verify their signature. When they are done with that, they will go back to Section 68 which states that the President of the Senate receives from the Chairman of INEC (a notice on) the recall of the member. They would also present evidence satisfactory to the House or the Senate.

So, they (constituents) need to come back here and convince everyone of us that they have done the correct thing. Unless they do that, they cannot even give effect to it. So, why are we wasting our time? Let us move on and allow them to waste their time,” he said.

“There is no need for further comments. The Deputy Senate President has said it; 10 years is no joke in leadership. We have seen clearly the processes. Let the process speak for itself. I don’t know why funds are being wasted, which should have gone on more important things. INEC is also at the middle of a test. Eventually, it must come back here for us to decide whether it is satisfactory or not,” he said.

INEC, in an interview on Tuesday had also said only a “legitimate court order” can stop it from carrying out its constitutional duties.