Flavour brings us together?! Watch how two strangers bonded over the magic flavour of Knorr 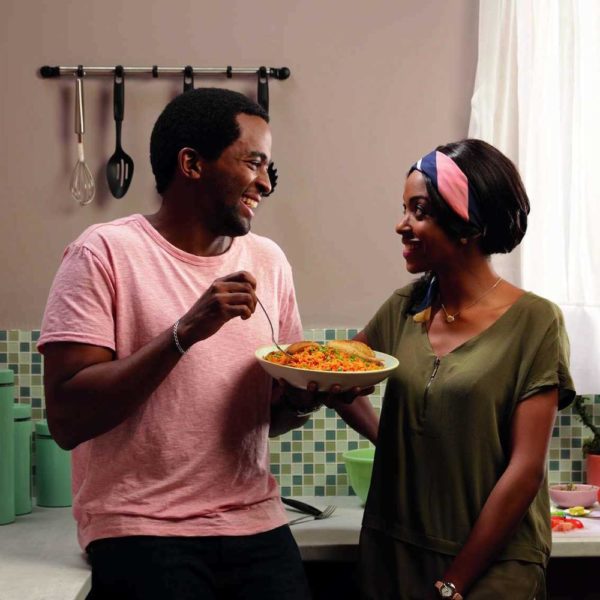 They’ve lived under the same roof but have never said a single word to each other.

He knew there was something about her, the way she walked, her eyes and he looked forward to the aroma that seeps out of her flat anytime she cooked. “She’s definitely a keeper.” He wanted to say something but he was scared his words might fail him and ruin whatever chances he had. One night, he was trying to fix himself something special. He wanted a treat, one deserves it once in a while and this night was that time.

When he started slicing and dicing, he felt a stare and when he looked up, it was his pretty neighbour. She was fixing a meal for herself too and staring out, looking into his kitchen. A part of him was excited; “Could this be fate or mere coincidence?” He shrugged it off and got cooking.

He could feel the stare tracking him as he picked ingredients from the shelves.

This had to be the most interesting cooking episode of his life. They were both having fun, dancing to the rhythm of their flavourful dish while their eyes played with each other. When the time came for him to add his secret ingredient for an explosion of flavour, something caught his eye; it was her secret ingredient too. He fell in love instantly! Now they had something in common.

She noticed it too, the guy who had been acting weird around her knew the secret to a flavour-filled meal. It lit something in her but then she went back to cooking. When she wanted to steal another glance at her neighbour, he was nowhere to be found. “What is wrong with this one?” she wondered. That was when the doorbell snapped her back to reality. She opened the door only to see him standing there with a plate of food. The aroma was nothing less than incredible. She smiled and ushered him in and then rushed back to the kitchen to round off her cooking. When it was ready she dished her food and then went to join him.

He didn’t expect how the conversation kicked off smoothly and the night turned out to be hitch free. They went on about food and flavour. Then, it happened, he stared into her eyes and said “Can we do this again?” and she replied with a warm, “Sure, no problem”. When he noticed it was time to leave, he picked up his plate, said good night and she walked him to the door. When she closed the door, she leaned against it and said to herself, “Hmm… boo is bae.” She smiled and then went to crash for the night.

Did you know that flavour brings people together? Find out for yourself and watch how two strangers bonded thanks to the magic of Knorr flavour.

From 2018 No National ID number, No Passport – Immigration