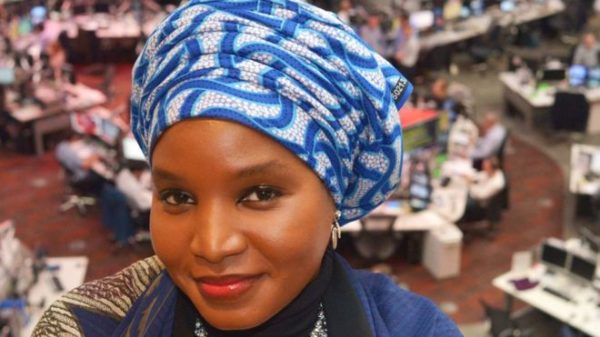 Amina Yuguda, a broadcast journalist in Yobe State, is the 2017 recipient of BBC’s Komla Dumor Award.

The award, created to honour Komla Dumor, a Ghanaian presenter for BBC World News, who died aged 41 in 2014, recognizes journalists from the African continent, and aims to uncover and promote fresh talent from Africa.

Amina Yuguda is a presenter on Gotel Television, a TV station in Yobe State.

She reports a diverse set of high-profile news stories, including the Boko Haram insurgency.

Yuguda, describing her win as a huge honour, said:

I was overwhelmed with joy. Storytellers have always had an important role in Africa.This is what defines us. Today journalists are taking on that responsibility.

Yuguda will begin a three-month placement at the BBC in London in September.

Yuguda will be the 2nd Nigerian to receive the award, after Didi Akinyelure, who was the 2016 recipient.

And the winner of the BBC World News Komla Dumor Award 2017 is… pic.twitter.com/0U4IAondzH