OAU Students win on Debut in Law Competition in India 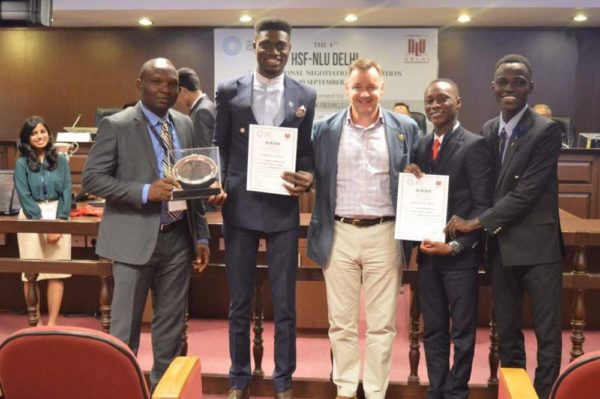 3 students from the Faculty of Law, Obafemi Awolowo University, Ile-Ife (OAU), recently represented the country at the 4th International Negotiation Competition in New Delhi, India, and won the Spirit of Competition award.

Ayansola, speaking with Lawyard, described the difficulty in getting sponsorship to attend the event.

Friends and family, he said, were instrumental in helping them seek assistance, and he urged the university authorities to invest in such competitions. He said:

It’s always been. For those who know me I started the #VENT Campaign on Instagram to address this same issue of funding and the de-emphasizing of scholarship in our society.

It took family and friends and the significant intervention of Mr Adesegun Akin-Olugbade (OON), Mr Gbenga Oyebode (MFR) chairman of Aluko & Oyebode and the firm of Banwo & Ighodalo for us to make the trip at the last moment. We will forever be indebted to the aforementioned sponsors.

We wish the University will invest more in ventures of this nature which can certainly attract foreign partners to Obafemi Awolowo University and increase the School’s reputation internationally.

Oyewole described the experience as the best he’s ever had. He said: “Apart from the competition, we got more exposed and connected with people who are vast in this area of law from HSF.”

Oyiki said the team’s win would have been impossible if not for the shared drive of his teammates, as well as their intelligence.

He also thanked the team’s coach, M. A. Lateef, for his advice and sacrifice. He said:

For our team coach Mr M. A. Lateef, his words of advice have brought us this far. He treated us like his mates. His sacrifice to our success can’t be downplayed. If I’m to do this again, I would do it with the same set of people.