Hey Food Lovers! Post a photo of Your Meal to Donate a Real Meal to Someone in Need in the #SharetheMeal #Knorr campaign in celebration of World Food Day 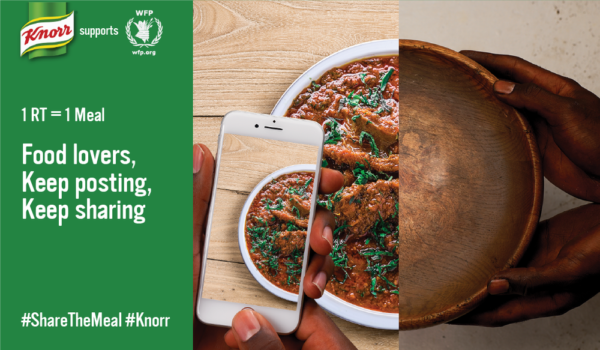 Knorr, Unilever’s largest food brand in partnership with United Nations World Food Programme (WFP) will be marking the 2017 World Food Day by giving food lovers the opportunity to turn their food posts on social media into a real meal for someone in need with the 2017 #SharetheMeal #Knorr campaign.

The World Food Programme (WFP) shared some findings that reveal 815 million people, or one in nine of the global population still go to bed hungry. New figures also reveal that each day, 3.5 million photos of food are posted, liked and shared around the world. That’s an online food conversation totalling 1.2 billion posts in the space of a year.  These food posts are shared so that it can be admired, not eaten.

For this reason, on Monday, October 16th, Knorr is encouraging food lovers to post their meals to donate a real meal. Each time #ShareTheMeal #Knorr post is shared or retweeted on Facebook and Twitter, Knorr will donate the equivalent of one meal via the World Food Programme (WFP), up to a total of 1.5 million meals.

Unilever is also using the World Food Day to spread its message of nutritious meals in line with the Knorr’s 3 steps of fortifying foods with iron in the bid to combat anaemia in the country. These steps include tossing greens into stews, stirring them in and crumbling the Knorr iron fortified stock cube.

This year’s campaign builds upon the success of previous World Food Day activation, which have seen Knorr donate over 3 million nutritious school meals since 2014 through its partnership with the World Food Programme.

People looking to get involved can download WFP’s ShareTheMeal app here which enables them to take a food photo and donate enough to feed a child for a day, with a simple tap on their smartphone.

Want to attend the High Growth Africa Summit 2017? Here’s how to Win a Free VIP Ticket