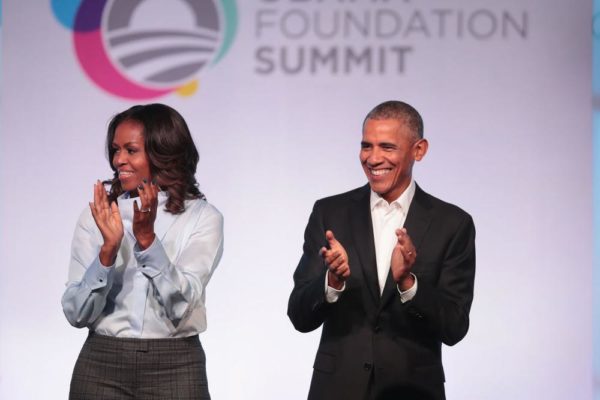 CHICAGO, IL – OCTOBER 31: Former first Lady Michelle and former president Barack Obama are introduced at the inaugural Obama Foundation Summit on October 31, 2017 in Chicago, Illinois. The two-day event will feature a mix of community leaders politicians and artists exploring creative solutions to common problems, and experiencing art, technology, and music from around the world. (Photo by Scott Olson/Getty Images)

The Obama Foundation Summit is a 2-day gathering of about 500 civic leaders from around the world.

Held at the Marriott Marquis McCormick Place in Chicago, speakers touch on ideas on how to create lasting change in the world.

According to ABCNews, Obama, during the opening session, described the summit as a brainstorming meeting. He said: “Our goal is not to present some fixed theory of how change happens. This is a big brainstorming session.”

Ordinary people in local communities can do extra ordinary things when they’re given the chance, when their voices are heard, when they come together

Prince Harry, in a conversation with Mellody Hobson on Day 1 of the summit, discussed the importance of giving back. He said:

You’re immediately born with privilege and spend the rest of your life paying back that privilege.

We have to listen to the younger generation because they are the cure of some of the world’s biggest problems.

Watch Conversation with Prince Harry below:

CAN commends Fayose for Declaring intention to run for Presidency