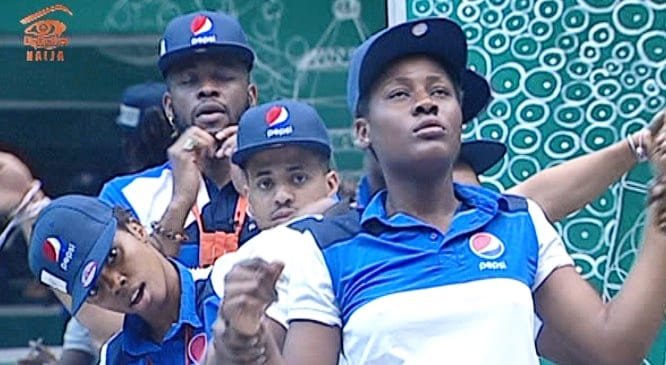 Did you watch day 31 of the Big Brother Naija 3 reality show?

When Ahneeka walked into the House, she let her million dollar smile that radiates for miles around do the talking.  As days went by, the beautiful and talented Ahneeka added credence to the beauty and brains motto. While she can hold down a drink very seriously and is a major competition in the twerking territory, there is far more than meets the eye to Ahneeka.

More than the beauty and sex-appeal, she has been the brainpowers behind her two partnerships so far.  First when she was paired with Rico Swavey as Rineeka, it didn’t take long for her partner to be tortured by the constant drooling over her. She on the other hand quickly cooled off any fantasies he was starting to entertain, for Rico was more like a little brother to her than a serious contender. She had come for the prize and nothing would veer her off her track.

While at first the logic behind Biggie’s next pairing her with Angel wasn’t immediately clear, it has ultimately proven to be a perfect match. Ahneeka and Angel offer a fantastic combination of wits, ease and ooze confidence. Like with Rico, Ahneeka is the silent leading member of the pair, never enforcing her opinion, softly guiding her mate into her own strategy. Unlike anyone else in the House, she managed to placate Angel’s bragging tendencies, a trait that has made him come across as socially clumsy. As they spend all the time together, following each other – or rather Angel willingly being led – the inevitable happened and Angel fell for Ahneeka. The perfectly controlled Ahneeka didn’t bat an eyelid. It was business as usual for her, though we suspect that something is cooking between the two of them.

Ahneeka has been curiously coy lately and Angel made no secret that he would want to date someone like her outside the House.

Biggie gathered Housemates in the Lounge to give them further instructions for the third part of the Roc Da Mat challenge.

Housemates were already aware that they were still expected to dance to the seven songs they had been assigned. However Biggie introduced a slight twist in that he would now be playing similar songs into the House, very similar tunes but not the right songs, and just to push Housemates a little bit further.  The caveat this time is that any Housemate caught dancing to the wrong song, that is a song not on their tracklist would have a point deducted.

As fate has it, Cee-C was the first casualty of the game for she rushed onto the mat when Tekno & DJ Cuppy‘s tune Green Light and not Pana belted out the speakers. Sadly for Lolu, this meant that their pair Ceelo lost another point – in addition to the strikes they’ve jointly received. Yet Biggie was in a lenient mood for he conceded that having Anto and Leo enact their Punishment today would hinder their participation in the challenge. To allow them to fully focus on their Task, Biggie postponed the Punishment to Friday, a news greeted with broad smiles by Housemates.

When the first Ninja emerged out of the elevator, Housemates knew it was time to open the fourth box. Biggie appointed Teddy A to go pick the key from the Ninja’s basket. He swiftly entered the glass room to open the corresponding box, that to everyone’s surprise contained a ₦2.5 million reward for the pair that would win the weekly challenge. Later a second Ninja walked into the Lounge, and this time it was Ifu Ennada who had the privilege of unlocking the box only to be slightly deceived by its Punishment of barking, begging and behaving like a dog

As of today, Ifu Ennada and Leo (Lifu) together with Tobi and Alex (Tolx) are leading the game with five points, while Teddy A and Nina are at the bottom.

To celebrate the Nigerian Arts, Culture and Entertainment industry, Biggie gathered Housemates in the lounge and instructed them to work closely together. Head of House Tobi read the instructions that the seven pairs had to work on seven original presentations covering the breadth and width of the vibrant Nigerian Arts, Culture and Entertainment industry.

No Housemate forgot that Biggie’s expectations were high and real and demanding, and that winning the Wager was contingent on the totality of the presentations covering a son, a poem, a dance, a painting, a play. In short, anything that honoured the industry throughout the past, the present and the future.

Biggie made it clear that shoddy presentations were not acceptable as Housemates would be provided with all the writing materials and equipment needed to deliver outstanding performances. Biggie also stressed that no extension would be granted, a nod to Rico Swavey who forgot his lyrics in the midst of his presentation last week.

Regardless of his good will, it took Tobi a whole lot of energy to bring Housemates on the same page and divide amongst themselves the Tasks.  People were speaking over one another until Tobi’s voice filled the room demanding attention. It was agreed that Music, Fashion, Dance and Drama would be started until the three outstanding sections were decided upon. Yet this didn’t help curb the tension as Ifu Ennada and Tobi exchanged a few scathing statements.

Here’s a reminder, lest we forget the show’s tagline, Double Wahala. Without fail and within a short period of time, Ceelo has managed to remind us that multiple folds of drama can in fact be found in one place, where else but the Big Brother House?

Lolu, Then and Now

Lolu, an ex-constituent of Loto has had his fair share of drama and seems to have come out stronger and more resilient. According to the signals he’s given, his and Anto’s was not just strategic pairing, the girl was literally his muse; so much so that even through Biggie’s reshuffles, his eye’s gaze has never wondered away from her. We were introduced to his emotional side when his name was mentioned by DJ Xclusive during the Saturday night turn up and further explored his softness and fragility when he spoke of his mom and upbringing. The screams and hurling of insults pretty much began when he was initially paired with Cee-C and it seems to be spiraling out pf control.

Cee-C has been the centre of controversy for a while now. Initially paired with Tobi and having enjoyed the HoH luxuries for a good two weeks. Her gaming approach was somewhat confusing and had the other Housemates thinking that she placed herself on a pedestal too high and felt they were all commoners. This brings us to the question of personality dynamics; it seems as though the other Housemates simply judged her without actually getting to know her. After much self-containment, she finally let out a more emotional and longing side to herself. In her own way, she finally reciprocated Tobi’s feelings and although that didn’t end so well, he seems to still see the softness in her, which really does exist. Afterall, the more responsive, the more sensitive. She’s simply a caterpillar that needs to be allowed to bloom into a butterfly.

The two have completely different personalities and seem to be totally aware of themselves, hence the constant quarrels. None accepts to be completely submerged in the others’ comforts. Today’s explosion stems from various things; Lolu constantly warning Cee-C to keep to herself and avoid being too explosive; while she feels that even though in a partnership, they should still strive on free masonry. Ultimately, this is what the show is about; interactions between people of different backgrounds and schools of thought. The drama is just a bread crumb from the main table. If this is their strategy; it certainly is raising a lot of eyebrows. Will they survive the chopping board and avoid wanting to literally chop each other?

Can I Take You Out?

First, it was the HoH save and replace that further intoxicated the already polluted air in the ‘Cebi’ universe and had Cee-C thrown under the bus in the name of strategy. Then, Tobi seemed to have been very defensive of the other Housemates and left Cee-C hanging by the thread up the roadside tree.

Meal Under The Moon Light

Despite the blood rush causing moments, Cee-C and Tobi seemed to be civil towards each other and acted as normally as they both could manage. Between all the music and dancing, yet another conversation seemed to have taken place between the two of them, one that lead to Cee-C agreeing to a date with him. Remember his request for a box of chocolates to gift Cee-C as token of his apology? He decided to take the initiative and with the help of Chef Rico Swavey, served a simple but thoroughly thought through moon lit dinner. Clearly dressed to impress and ready to verbally caress, Tobi sweetly directed Cee-C to her seat and sealed their little romantic cocoon by shutting the front doors. Even a blind man could see how smitten they both were; the oga even reached out and fixed her hair, to which she obliged.

Cee-C seemed to be unable to let the save and replace matter go and Tobi explained his reasons for putting her and Lolu up for Eviction; elaborating that even though he felt so strongly for her, his principal objective wasn’t romance and he therefore needed to strategize accordingly. She too expressed her dissatisfaction and how broken she was by it. Fast forwarding to today after her quarrelsome episodes with Nina, Miracle and Lolu; it did look like Tobi was more for the others than he was for her for which he eventually apologized.

Strategy or not, Cee-C was obviously very shattered by the candy coated betrayal and having been the one to have spent the most time with her, Tobi understood just how much this turn of events affected her, hence his gesture. We’re beginning to wonder whether his feelings are real or he’s just playing the ‘Keep your enemies closer‘ game. Nonetheless, this whole thing gave us goose bumps all over.

Have you been watching? What did you think of the Day 31 activities?

Friends that Slay Together… These Two Wives of Alaafin of Oyo are also BFFs ?