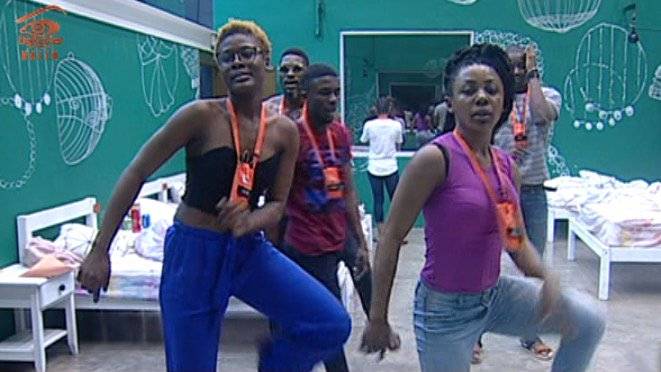 Did you watch day 39 of the Big Brother Naija 3 reality show?

As days turn into weeks and weeks into months, it’s becoming more and more visible that no one is immune to a pinch of drama and quarrels can’t entirely be avoided; not even by our ‘couple crush’, Nina and Miracle.

Although subtly, Nina and Miracle pulled in different directions and had a mini quarrel last night. Nina claimed that Miracle had shouted at her and seems to have an ‘I don’t know how to apologize’ default to his personality. Miracle on the other hand felt that it was only human of him to shout back at her unwelcome persistence while he was making food for the both of them. He seems to be unable to leave any stones unturned though as he was quick to want to confront Nina after Anto told him that she summoned him. The point here is not the quarrel, it’s the fact that Nina was not afraid to manifest her displeasure.

The couple has had a couple of play fights and have always been able to iron their difference out and until yesterday, have never let the sun set on their wrath. This harmony can be largely attributed to Nina previously being unable to stand on her own two feet and leaning on Miracle for moral support. This crack in her personality was further deepened by how the rest of the Housemates perceived her as dull and air headed; unable to speak her mind and give an independent opinion. Basically, their relationship remained intact because in all honesty, how does one wage war against their only support structure and defence?

Fast forward to the reshuffling of the pairs when Nina and Teddy A were glued together by default; the walls of Jericho seemed to be doubling in width as Nina watched her Muse being taken away from here; no one expected that she’d recover so quickly and finally be able to defend her honor, even against her bae. The stars must have aligned though because Teddy A kept his promise. He was able to press the right buttons and give Nina’s personality a much needed stretch. She told Miracle that she wanted an apology and wouldn’t let it go till she got it. Even though they eventually went to bed without him giving her the satisfaction, he sure knows that his bae ain’t letting things slide anymore.

As they say, the women we have come to admire for their grace and strength did not get to where they are because things worked out; it was in fact quiet the contrary and they handled it a thousand different ways, on a thousand different days. That’s the thing about them; they kept surviving. The ‘sheroes’ in the Big Brother House are not different. With all their imperfections, they fearlessly graced our screens and let it out and for this reason, we raise their flags.

Were pretty sure that many would agree that BamBam was dipped in peace and sprinkled with empathy. Even when asked what her Nomination motives are, her answers are never direct attacks at the other Housemates’ personalities but rather focused on their overall contributions or lack thereof. The say that empaths are naturally giving, spiritually open, and good listeners and we fully agree with the notion because BamBam is all that and more. As the reigning HoH, we’re certain that greater things are to come.

If Anto was a tree, she’d defy nature by bearing different fruit on the same branch. The kind that can uproot and reposition at will because her personality is as stern and stable as none we’ve seen before. She’s been able to keep her emotions in check and has her eye fixed on the price, call he Hawk. Never having had a single argument, her approach is that of friend and foe; I like you but I don’t know you enough to trust you. She’s loyal to her pack and driven, just some of the reasons why she graces the Big Brother Naija House. There’s more to Anto than meets the eye.

Best believe that Cee-C isn’t just a pretty face because she’s proven it countless times. Her resilience and strong will make her one of the toughest female acts to follow. She draws her strength from past experiences and doesn’t allow anything or anyone close enough to hurt her. Like many of us, she has things bottled up inside, things that make her come across as aggressive. She has oodles of compassion deeply embedded and has tons of love to give. Thick skinned and determined, no one calls her out and gets away with it. Diamonds are always rough around the edges.

Nina is an epitome of passion and affection. Soft spoken with streams of potential and a long road ahead of her. She’s shown just how the same water that softens lentils also hardens eggs. Instead of being broken down by criticism, she’s used it as a building blocks for a newer and stronger version of herself. She represent all the young people going through metamorphoses; caterpillars to butterflies. Her instant attraction to Miracle isn’t a sign if weakness but that of strength and self-assurance. After all, there are decades where nothing happens and days where decades happen.

Highly driven and talented Ifu Ennada isn’t afraid to adjust the volume whenever she feels that she isn’t audible. Her zest for life reminds us that youth is not just an age factor, it’s a philosophy. She creates her own rhythm while respecting the difference in those of other. There are a couple of time where we saw a completely playful and sexually awakened side of her. No topic is taboo and no challenge too overwhelming. She too has things bottled up when with time, these will spill and allow her to reach new heights and own it. Her light, no one can dim.

Alex dances to the beat of her own drum and is still on her muse finding journey. Authentic and sometimes naïve, she confesses to what she doesn’t know and contributes to what she does. Based on one or two, Alex has stars shining on her behalf and on her command. There are those who try to impose a ‘how to live’ manual; not with Alex. Colorful hair and even more colorful personalities, her life is a canvas and she’s the artist. Only those half as lost in the same trance will understand the illustrations.

Music and the Mood

Things in the House have been very tense lately, with all the Task preparation, water restrictions and general cabin fever, today one of life’s small joys was needed to change the mood and boy did it ever.

The mood in the House was low all day and this week has been particularly contentious for many. It has been almost six weeks in the House so it is expected that things would get hair raising. As tonight sees the highly anticipated Heritage Bank debate on global warming, all the Housemates spent the whole day preparing and memorizing. Maybe out of sympathy or possibly even telepathy, Biggie decided to start pumping some music throughout the house and it was just pure life. The Housemates began to shake off the stress of it all, everyone got in the groove.

Obviously some Housemates were way more into it than others, for example, our resident Queen of the dance floor, Alex began co-ordinating group dance moves with many of the Housemates. As the dancing went on for almost forty minutes, Alex, Ifu Ennada, Lolu, Tobi and Leo became the epitome of squad goals and began throwing out some killer dance sequences.

Even after the music stopped, the good vibrations ran rife through the House, it was exactly what needed to happen and it made for some great entertainment. Nina and Tobi spent some time laughing as she braided his beard. Miracle and Anto were also in high spirits, laughing away at the situation. Alex was also smiling from ear to ear and the little step-up session gave Ifu Ennada the extra boost she needed for her last session of Task preparation.

Sometimes the small things really are the big things.

Have you been watching? What did you think of the Day 39 activities?