These Tweets by Juliet Ibrahim has got #BBNaija Fans Talking

Nollywood actress Juliet Ibrahim in a series of tweets has declared her support for #BBNaija contestant Cee-C.

Ibrahim, on her Twitter, described Miracle as boring, and criticised his supporters for what she said was cyberbully.

Miracle, who garnered the highest number of votes in Sunday’s eviction show, was asked by Ibrahim to “step out of his comfort zone.”

“Cee-C is giving us drama and we are loving it,” she wrote.

Nigerians had a lot to say concerning her tweets, some in support, while most steadfastly against.

Cee-C supporters declared their unwavering support, while Miracle fans listed his achievements in the house, and why they think he deserves to win.

See the replies below: 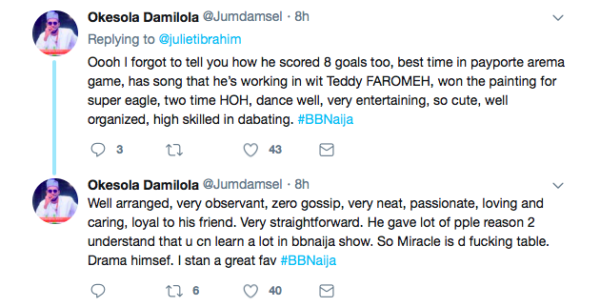