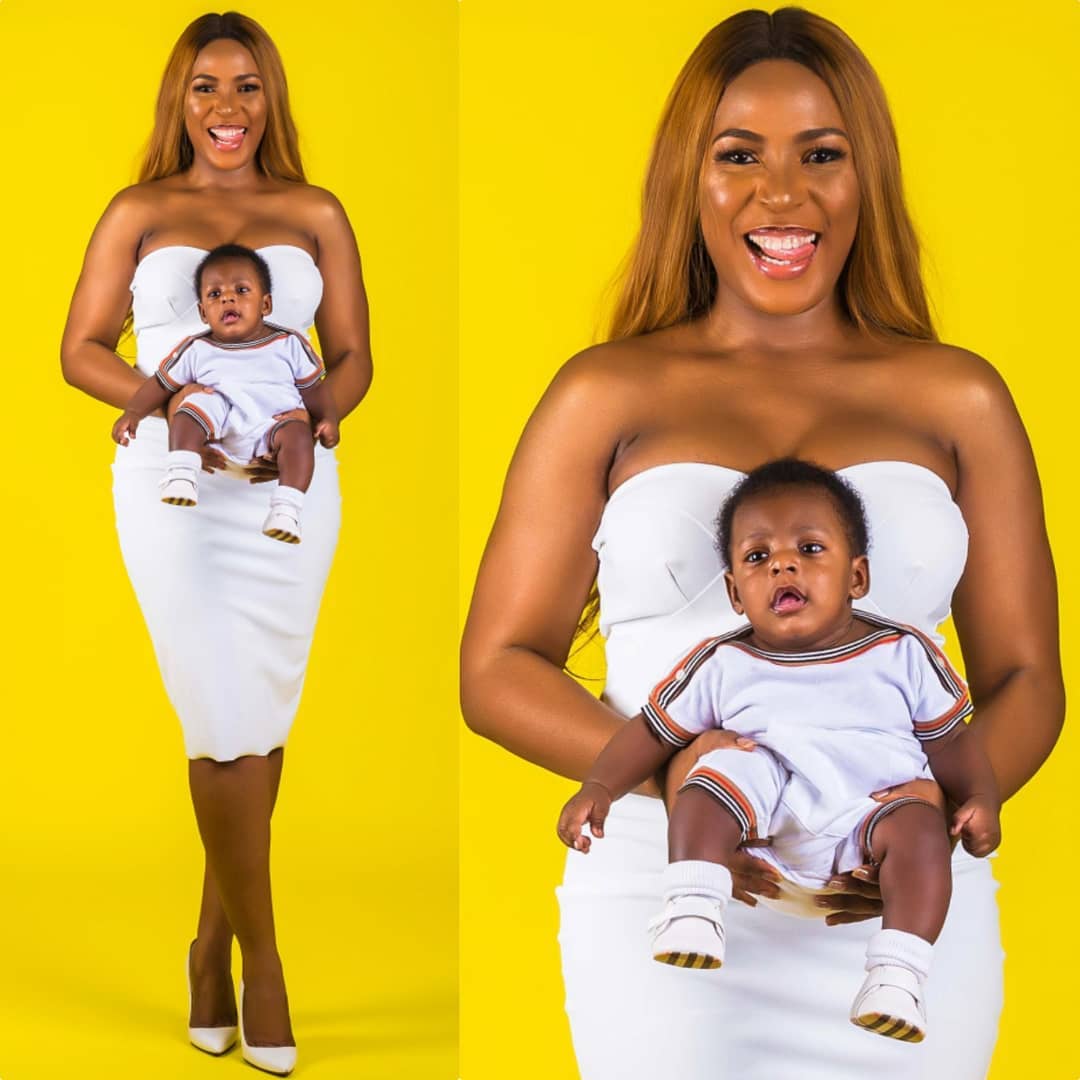 For months, there have been rumours about who the father of celebrity blogger, Linda Ikeji‘s son is. Now the media entrepreneur has revealed who he is – Sholaye Jeremi.

Meet my son Jayce! ???. And yes, Sholaye Jeremi is his dad. Unfortunately he and I are a completely closed chapter ?. Lol. I wrote something about it on my blog. I hope it reaches those it was intended for. ?. You can go over there and read! God bless

In the post on her website, Linda shared how she and Jeremi met, and what led to their separation.

The father of my child is a single man and his name is Sholaye Jeremi.

One of the things many people have asked me is how I met this man because we don’t run in the same circle. Well, I met him 3 years ago at Wheatbaker Restaurant in Ikoyi in December 2015 shortly after I moved to my home in Banana Island, Ikoyi. It was a day after Christmas and I was having dinner with friends when he walked in. He saw me and the rest is history. He claimed at the time that he had never heard of me which was seriously a turn-on for me because up until then I’d only been meeting men who behaved like fans. At the time we met, I was 35 and he was 37 and I’d been single for nearly 4 years. I was definitely searching and I fell in love almost immediately and so we became an item.

At the time I met him he lived in a 3-bedroom flat at what used to be 5th roundabout in Lekki after Mobil. I used to drive for almost two hours in traffic from my house to go see him. Most of the time, I carried my laptop to his home to enable me to work and at the same time spend the whole day with him.

It was a whirlwind romance. He was the funniest and most romantic guy I’d met up until that point, so it was easy to fall in love and I truly believed the feeling was mutual. A few weeks after we met, it seemed like we were planning a future together. This man was already calling me Linda Ikeji Jeremi and making all these plans but then just like that, it was over between us. I went from waking up every morning to love text messages from him to no more calls. I was just thanking God for finally sending me my own man when all of a sudden we were no longer talking to each other. Later he would tell me what scared him off. My public life. He claims he’s a private business man and didn’t want the attention being with me would bring to him and I told him I understood and we went our separate ways. We tried to get back together in 2016 but it didn’t work out so much so we separated again but stayed in touch (mostly him to be honest), stayed friends and that was how our back and forth started.

By mid-2017, we were both still single and we started seeing each other again quietly. There were times it was very intense and we talked about a future together, and there were times that I couldn’t figure out what exactly I was doing with this guy. We were not suited for each other. Totally different lifestyles. And there was the problem of my fame. I walked away from this man a million times and he came after me a million and one times. No matter how much I pushed him away, he kept coming back and me, because I couldn’t find anyone else, I kept going back. Lol. So I was basically going back to my ex because I couldn’t find anyone else. *sigh*.

Then I fell pregnant. It wasn’t planned, it just happened; though we talked about having a child together just two months before I fell pregnant. He said something about putting a billionaire baby inside me and I remember jokingly telling him that I’m also a billionaire so our child was going to be a billionaire on both side…and we laughed. But after I fell pregnant, things became extremely weird between us. If I tried to explain what happened, I wouldn’t be able to because it was confusing to me. We went from talking about the pregnancy and being okay with it; he even suggested I go to Dubai for my pre-natals as he didn’t trust doctors in Nigeria, to literally not talking to each other anymore. Around when I was about three months pregnant, he did come to see my parents and actually became very cool with my dad. They were literally exchanging Whatsapp messages every day. He later agreed to a traditional wedding which he didn’t follow through and then he switched. He began to treat me with so much hate and aggression that I and my family had to cut him off completely.

To be honest if anybody had told me when we met three years ago, considering how deeply we cared for each other that I would fall pregnant two years later and he would completely turn his back on me for most part of my pregnancy, I never would have believed it but that’s what happened. I had to draw strength from myself, my family and close friends.

She also addressed the social media comments criticising her of being a hypocrite, for encourage people to be celibate, but went ahead to get pregnant our of wedlock. She wrote:

I’d also like to address a few other issues. Number one is this celibacy issue. So many people have trolled me over it and I’d like to correct the misunderstanding. I have never ever in my life said people shouldn’t have sex before marriage. NEVER EVER have I said that. I have even argued with quite a few people that it is not feasible in this day and age.What I have always said and I maintain till today is; Do not ever sleep with men for money because any woman with a brain and determination can get her own money herself. And there’s nothing sweeter than your own money.

The other thing I’ve always said is; do not sleep around with multiple men who just use your body for their pleasure; that is; too many one night stands, casual sex, many sex partners in a short period of time all in the name of relationships. Your body deserves better. I feel sex should only happen when you’re in a loving, committed relationship with someone you love. I was celibate for many years until I met my son’s father and fell in love. And instead of increasing my body count, I just went back to the same eggplant…lol.

“Lionheart” to begin Streaming on Netflix in January