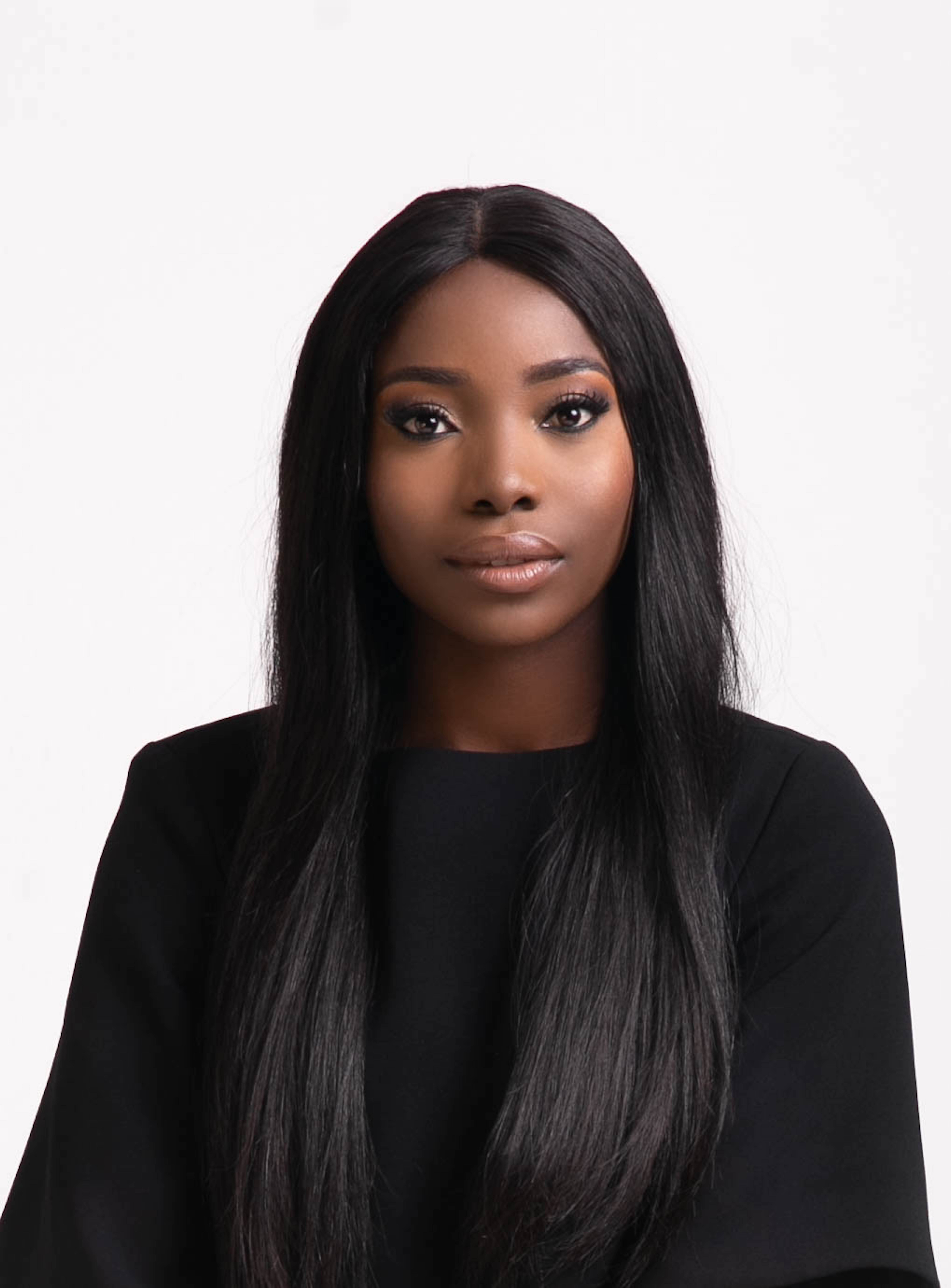 One of Nigeria’s leading PR agencies, LSF|PR has been announced as the winner of four SABRE Awards, the world’s largest PR awards programme, recognising superior achievement in branding and reputation in North America, Europe, the Middle East and Africa.

LSF|PR led in the African Category for its innovative and outstanding work for the Darling ‘Find Your Beautiful’ campaign for Godrej Nigeria, winning in the Diamond Category for Superior Achievement in brand building and emerging as a finalist in the Platinum category for Best in Show, a category which recognises the best African campaign of the year, alongside global agencies such as Atmosphere and the King James Group, Ogilvy, Burson Cohn&Wolfe and WE Communications. In the Gold category, LSF|PR earned a Certificate of Excellence for Media, Arts and Entertainment.

The company, known for making a lasting impression with its communications strategies and thoughtful planning, also emerged as a finalist in Diamond Category of the SABRE Awards EMEA, competing against top agencies across Europe, Middle East and Africa, such as Teneo, a company that represents 24 of the FTSE100 and Hope&Glory, one of UK’s best Independent PR agencies. 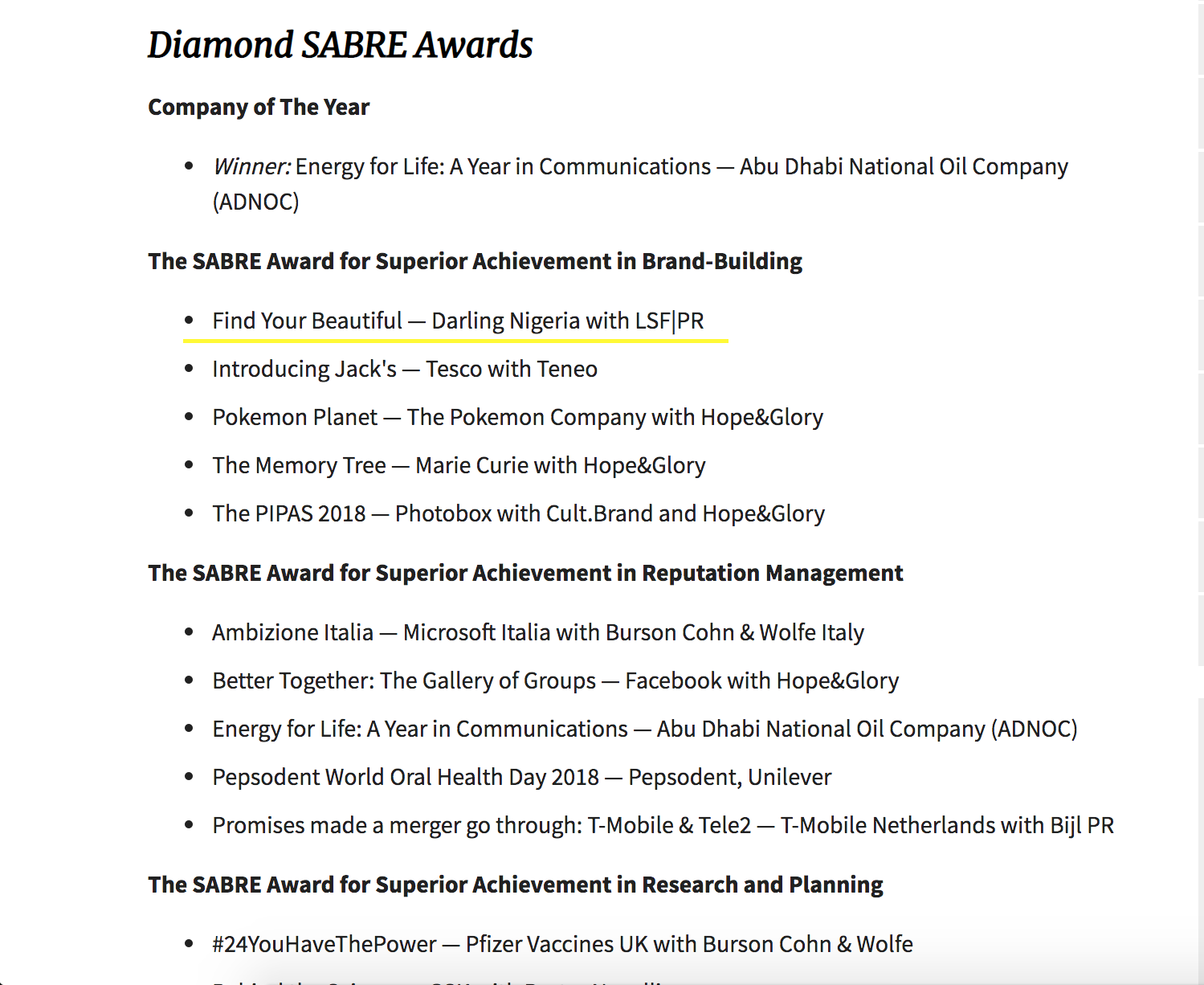 In addition to being shortlisted in the Diamond Category for Superior Achievement in Brand Building (SABRE Awards EMEA), LSR|PR’s Find Your Beautiful Campaign for Darling earned 2 Certificates of Excellence for the Best use of social network and Best use of influencer program and endorsement (paid) in the IN2SABRE Awards, EMEA. The IN2 Sabres celebrates EMEA’s best content and engagement work, shining a spotlight on the biggest and best ideas and the most creative execution and providing a glimpse at what’s next in branding, reputation and engagement.

Speaking on the awards, Bidemi Zakariyau, founder & current CEO of LSF|PR said, “We are extremely honoured to be receiving such awards. Last year, we were a recipient of a certificate of excellence by the SABRE Awards for our ‘Through your life campaign” for Philips, we also won the ‘Campaign & Idea of the Year,’ award at the African Excellence Awards 2018 for our outstanding work on the ‘Find your beautiful’ campaign for Darling.  These awards are a validation of our consistency, diligence and commitment to excellence.”

She added that “At LSF|PR, we work tirelessly to deliver excellence for our clients. It is so incredible to see our Darling Campaign competing side by side with stellar campaigns across the globe.” Zakariyau also expressed appreciation to her colleagues adding that “These awards are also dedicated to my colleagues at LSF|PR whose dedication, diligence and commitment to excellence have brought us this far.” 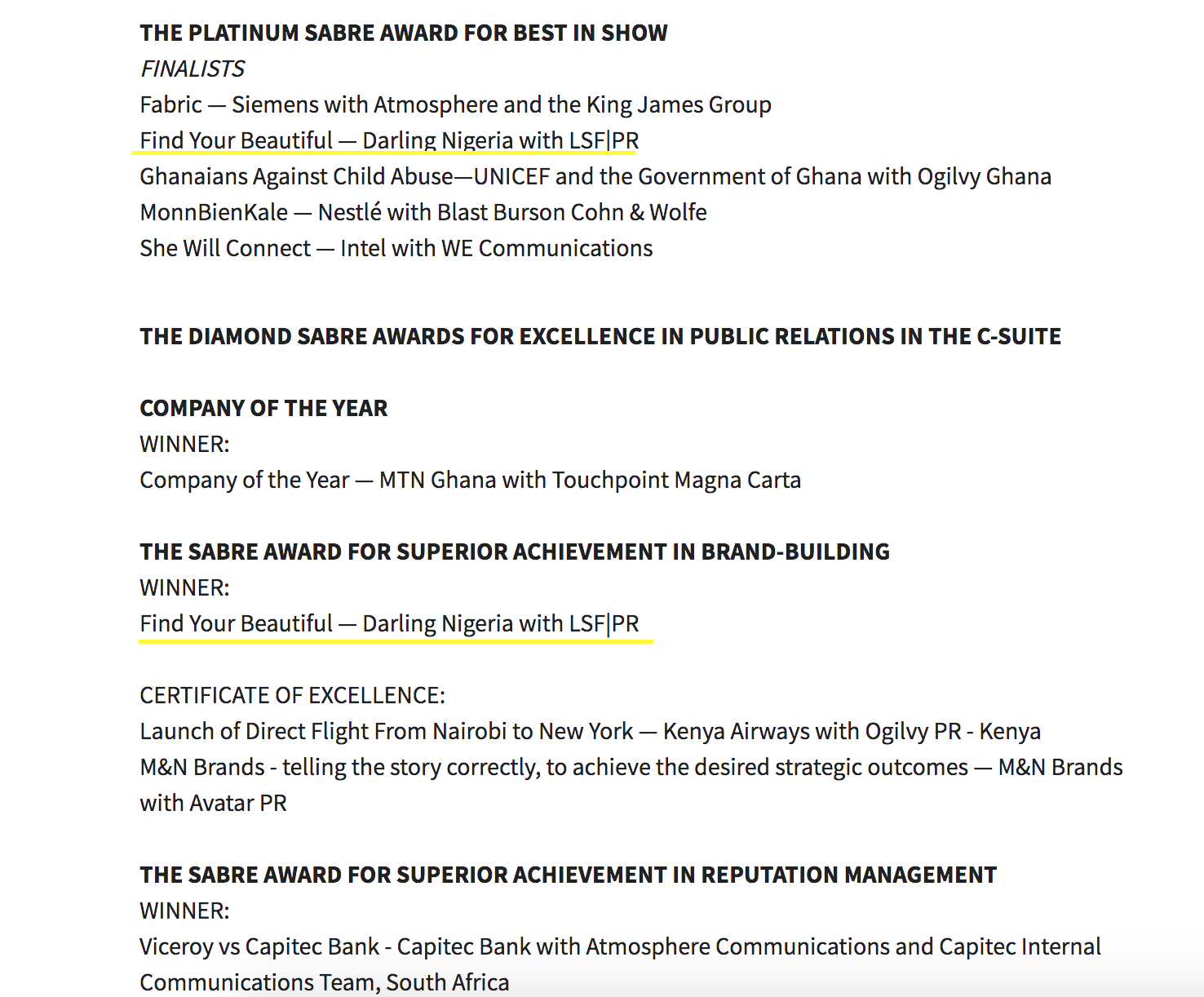 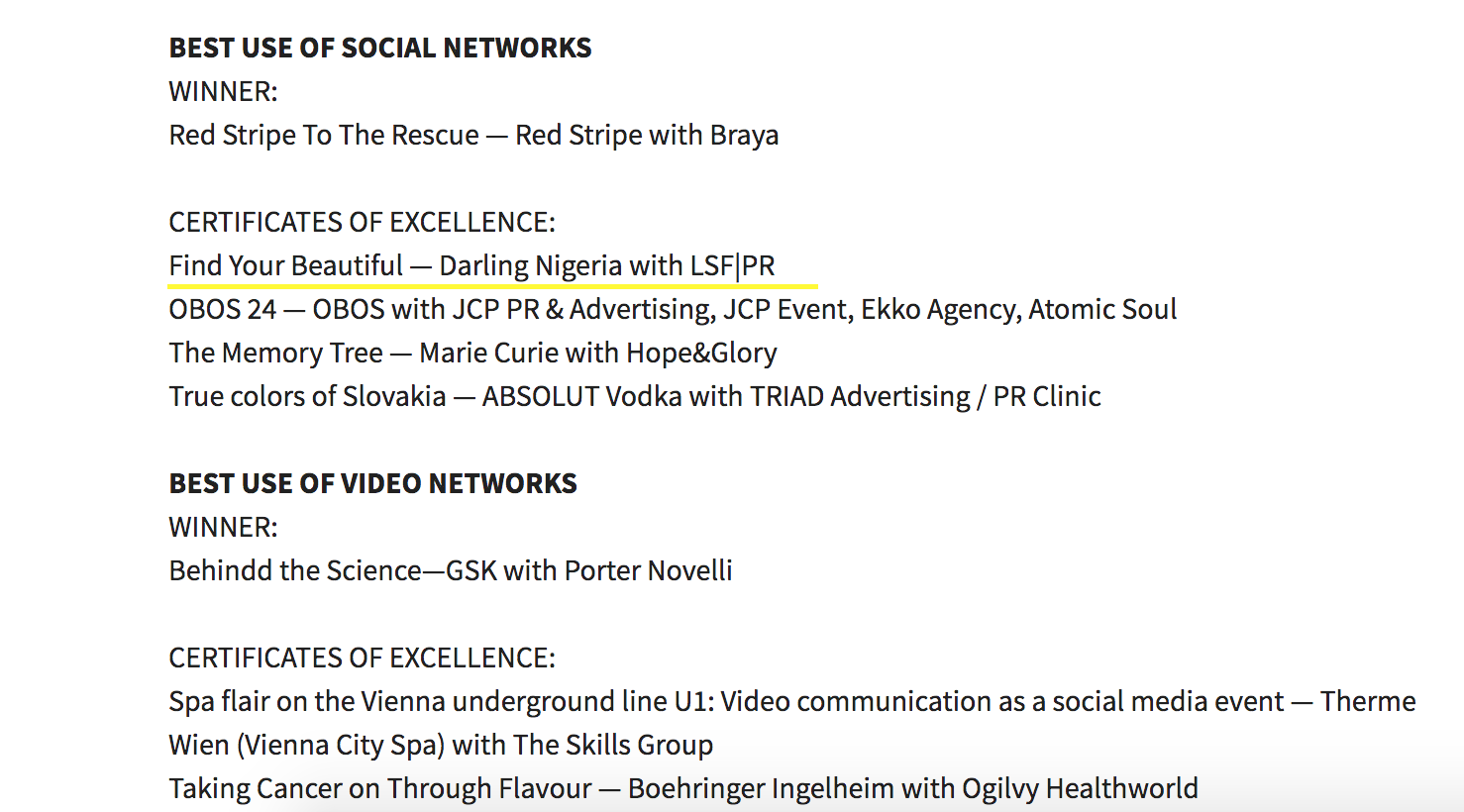 The awards, she assured, would help to spur LSF|PR even further in its consistent quest for excellence.

LSF|PR is a full-service public relations firm with core competencies in corporate communications, consumer and lifestyle brands. The agency represents some of the best local and world leading brands in the corporate, consumer, technology, oil and gas and lifestyle sector.

The SABRE awards Africa ceremony is scheduled to hold on Thursday, May 16th in Kigali, Rwanda while SABRE Awards EMEA will hold on May 22nd in London. 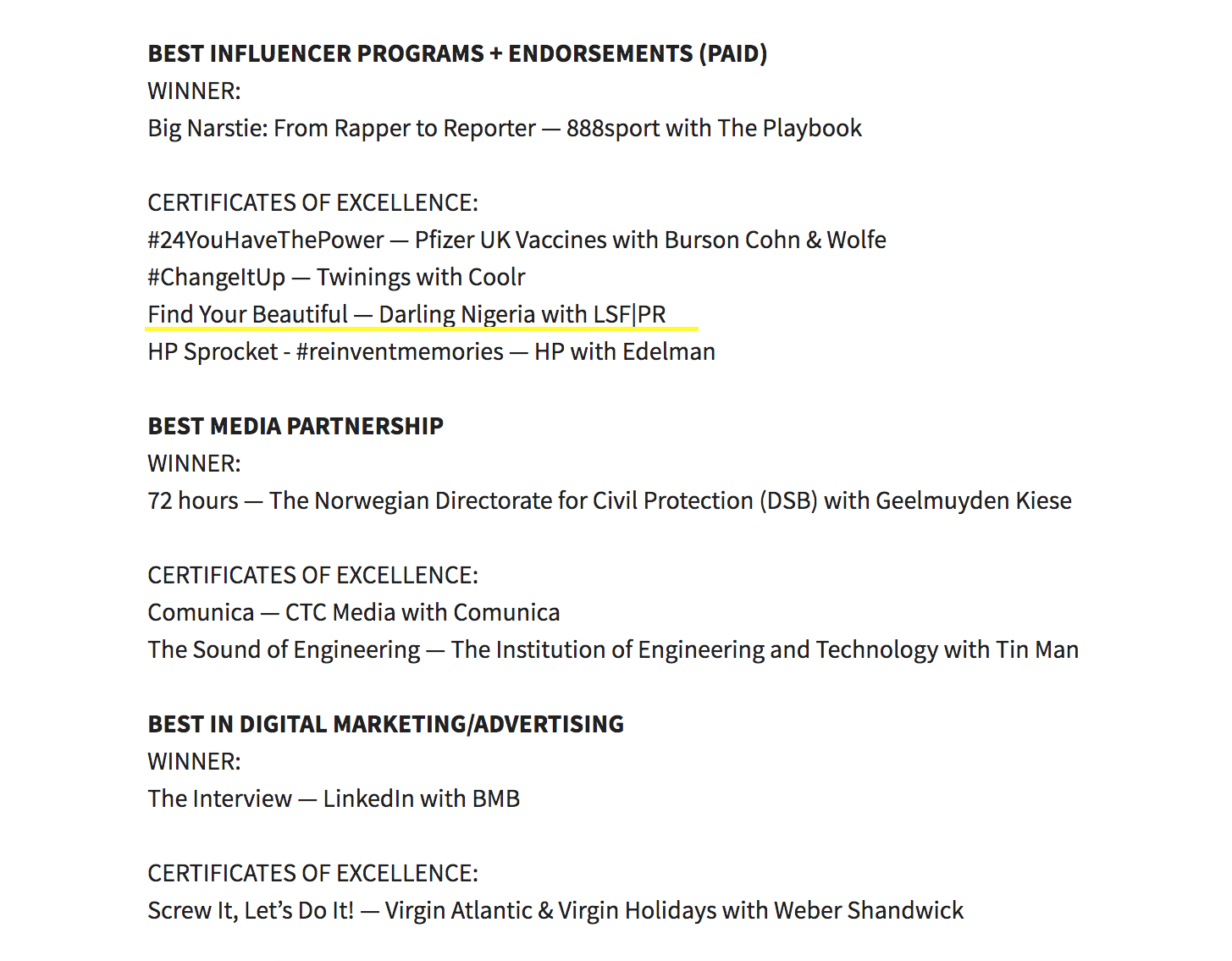 Juliet Ehimuan: Building for the Next Billion Users