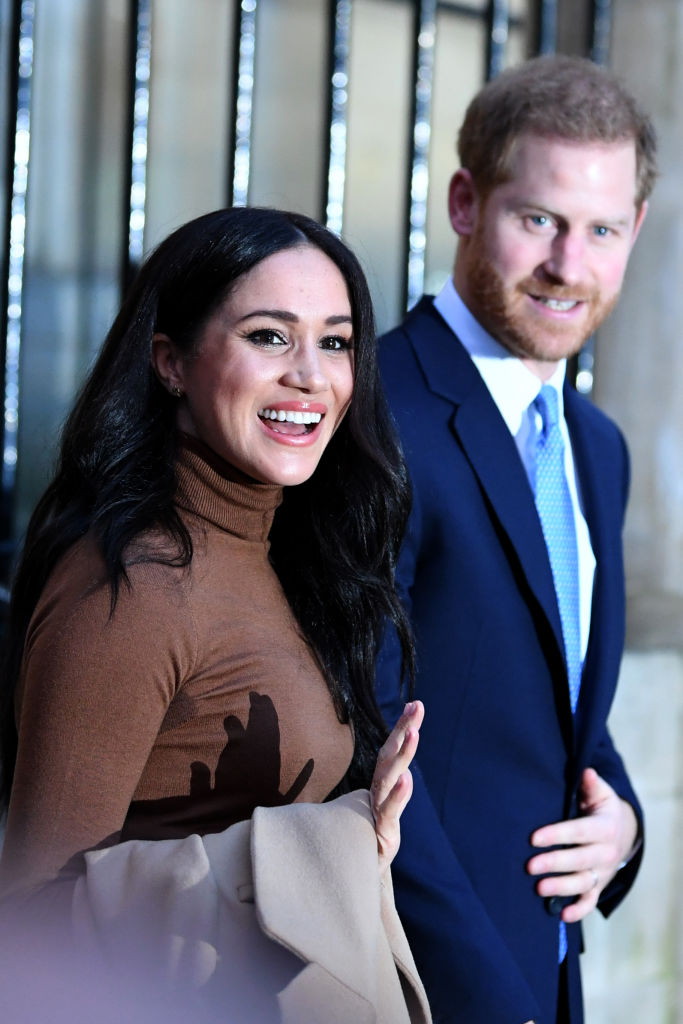 LONDON, UNITED KINGDOM – JANUARY 07: Prince Harry, Duke of Sussex and Meghan, Duchess of Sussex react after their visit to Canada House in thanks for the warm Canadian hospitality and support they received during their recent stay in Canada, on January 7, 2020 in London, England. (Photo by DANIEL LEAL-OLIVAS – WPA Pool/Getty Images)

Oprah Winfrey and Gayle King have expressed their support for Meghan Markle and Prince Harry‘s decision to “step back” as senior royals.

Oprah Winfrey is a close acquaintance of the couple and attended their wedding in Winsdor, and Gayle King attended Meghan’s baby shower last February.

In a new video captured by TMZ on Tuesday in New York, Oprah spoke about the couple’s ground-breaking decision, saying: “I support them 1,000 percent”.

She noted that Harry did what he needed to do for his family and everyone should respect it.

You know why I support them?. I support them because I believe, when you have thought about this as long as they have, Queen Elizabeth’s statement also stated that these discussions have been going on for months and when Harry said in that charity statement the other day he had to make the decision to move forward in peace with his new family, who doesn’t feel what that takes to make that decision to give up everything you’ve known your whole life to say, ‘I’m going to choose this new life or what I believe to be the truest vision for myself?’ Who are any of us to stand in judgement of that?”

They didn’t make the decision in a vacuum. There were a lot of conversations. That’s why I thought it was very unfair to say the Queen was blindsided. Even the Queen’s own statement said these conversations have been going on for months.

?| @fantashamw . In a video published by TMZ, Oprah said that she supported the Sussexes '1,000 per cent' in their decision to step back from the royal family, adding that she believes Prince Harry 'did what he needed to do for his family. I don't think anybody else has any right to say anything, when a person has sat and thought about what is the best decision for him and his family, and then he makes that decision… none of us have any right to say anything about that.' . . Meanwhile Gayle commented saying: 'Prince Harry didn't make that decisions in a vacuum. There were a lot of conversations.' . . . #meghanmarkle #duchessofsussex #royalfamily #britishroyals #royals #princeharry #archie