All of Us will Miss the Late Great Victor Olaiya ? 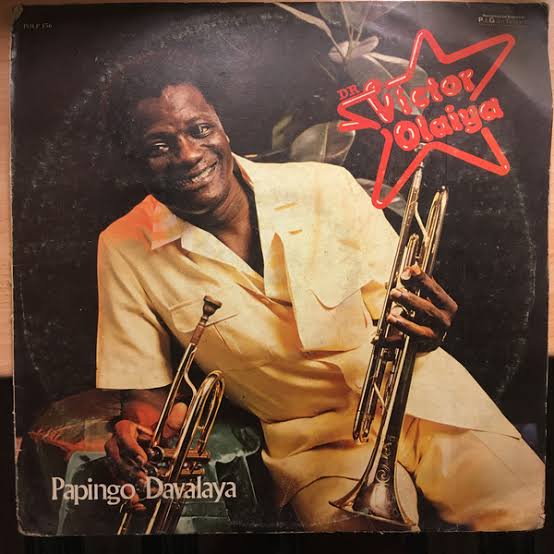 His death was confirmed by Michael Odiong of Premiere Music, who reported that the music legend died around noon on Wednesday, Channels Television reports.

Victor Abimbola Olaiya was born on December 31, 1930 in Calabar, and is the 20th child of a family of 24. He was well known with the musical instrument, the trumpet, which he played the highlife style.

“During the Nigerian Civil War of 1967–70, Victor Olaiya was given the rank of a lieutenant colonel (honorary) in the Nigerian army and his band played for the troops at various locations”.

He’s the legend behind the famous tracks “Baby Jowo” and “Omo Pupa,” and an uncle to the late actress, Moji Olaiya.

A lot of Nigerians have since then taken to Twitter to express their grief, and also  to celebrate the music legend for his great work.

In July 2013, 2Baba collaborated with the late music legend for the music video remix for “Baby Jowo”. The music star also took to Twitter to express his grief and also used the medium to celebrate him. He wrote:

Devastated by the news of the passing of Dr. Victor Olaiya – maestro, mentor, legend. Thanks for the beautiful music. Thanks for the inspiration. Blessed for the honour of sharing a mic and stage with you. Rest in peace baba.

Devastated by the news of the passing of Dr. Victor Olaiya – maestro, mentor, legend. Thanks for the beautiful music. Thanks for the inspiration. Blessed for the honour of sharing a mic and stage with you. Rest in peace baba.

Mehn! This closes a major era. Dr. Victor Olaiya was one of the true greats. A legend has just passed on. May his soul rest in peace. https://t.co/SoXj4og6YH

Victor Abimbola Olaiya, also known as Dr Victor Olaiya has passed away. He was a Nigerian trumpeter who played in the highlife style. His style was influenced by James Brown, with horn parts harmonised in Brown’s style, as opposed to the mostly unison lines of Afrobeat.#rip pic.twitter.com/WFoEuGJCL6

RIP Sir Dr. Victor Olaiya, thanks for songs and this beautiful piece. You are forever in our hearts as you transit to rest in heavenly places. https://t.co/xlJlqZblWX

RIP Dr Victor Olaiya.
Thank you for blessing us with ever green songs that cut across generation. What we do and the lives we touched and the legacy we leave is what matters at the end of the day.
This icon has blessed us with happy memories. RIP

If you music teacher back in pry schl didn't teach you how to play Victor Olaiya's 'Omo Pupa o' with the recorded, You went to a fake school.

An amazing musician
A trumpeter extraordinaire. He was called the Evil Genius of High Life.

Even if you didn’t know the name,
You must have heard the song “Baby Jowo” (TuFace did a remix with him)

He died today at 89years old
Much respect and regard ✊? pic.twitter.com/FyVM0FOJgN

For the 9th Year in a Row, Dangote is the Richest Person in Africa