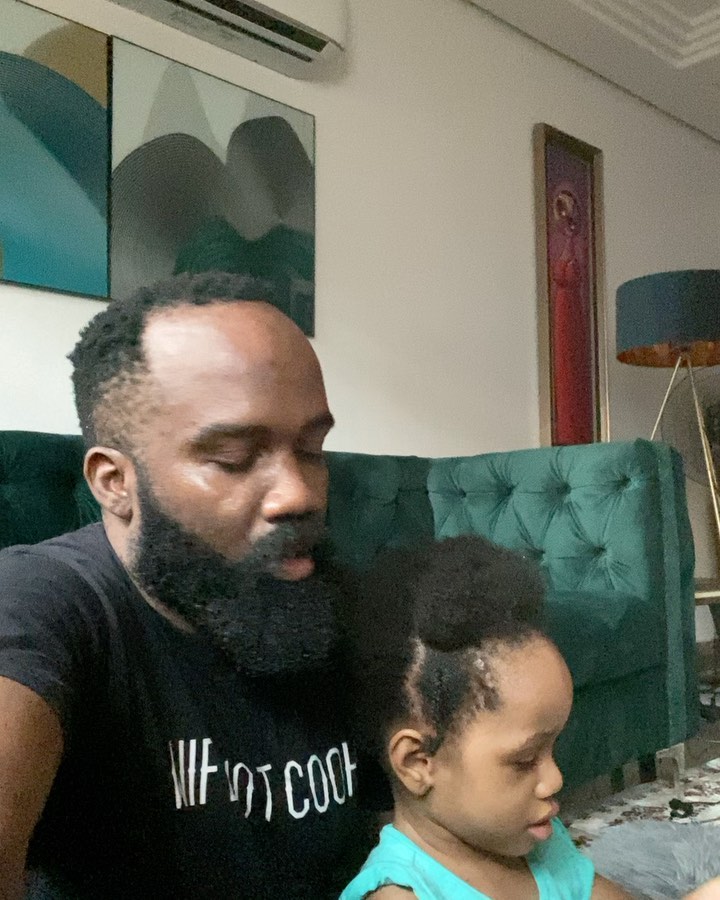 There is truly nothing like the bond between a dad and his daughter. Fathers play a key role in the development of their daughters from the moment they are born.

Fathers bring fun into the lives of their girls because that’s just the way dads are. They are the best at spending time relaxing with their daughters doing whatever leisure activity that suits their fancy.

We have compiled some sweet videos of dads and daughters creating memories that will last a lifetime.

Noble Igwe has two lovely girls who give him so much joy, but he shares a special bond with his first daughter Jasmine which he sometimes admits. In this sweet video, Noble is seen making her hair with distractions from his second daughter.

HAIR DAY I don’t know how long it’s going to take me to finish making Jax’s hair and it’s not because I’m not good enough,it’s mostly because of the human obstacles in the persons of Chioma and Lia, First, Chioma wouldn’t let me loosen the hair in peace. Chioma : Babe, what style are you making for her? Nobs : A new style Chioma : I need to know first before you loosen the hair. Nobs : She’s my daughter too though and I wouldn’t leave her looking like an extra in a Nollywood movie. Chioma : It takes us time to make her hair and at this rate it will take you days. Nobs : It’s not like we are going to work tomorrow. Chioma : But you won’t post my daughter’s hair looking like ihe oke tara. Lia on the other hand wouldn’t allow me drop a comb, record a video or braid the hair in peace. Jax is the perfect candidate but she’s told me “Daddy, I want to wee wee “ at least 3 times. I’m not saying all these just in case the hair does not turn out well, remember that it’s the effort that matter. To be truthful, I don’t know the name of the style that I’m going for but I guess I’m On the right track of my back is already hurting,that means I’m doing it properly. Take a look at the videos and tell me if I’m doing it right.

Remember that time Dwayne Johnson dressed up as Pikachu (his daughter’s favourite character) for Halloween and went on to perform in the costume? At the end of the video, you can hear Dwayne’s daughter yell, “Peekyu!”

Pikachu is baby Jasmine's FAVORITE character. So, for Halloween me and @laurenhashianofficial decided the real life Pikachu was gonna come to the house for a visit. What Pikachu didn't know was that Jazzy would start crying when he stopped dancing and demanded he continue to shake his tail with a loud "EH!". So, Pikachu danced over.. and over.. and over.. and over… and over.. again. By the time I dropped my 197th JuJu, the heat of this costume was kickin' my ass.? But, hey.. that's what daddy's do. #HappyHalloween #DaddyBlessedWithThatKnuckAndBuckStamina #NoLimitsWhenItComesToMakinEmHappy

This dad tries to style his 3-year-old daughter’s hair for the first time and while he is having a bit of trouble, she has nothing but encouragement for her dad. He clearly did a great job.

In 2015, then two-year-old Riley Curry stole the hearts of many basketball fans. Riley first made a splash when she appeared with her dad, Steph Curry, during a post-game interview on May 19, 2015.

This dad attempted to dress his daughter on her birthday and when it got to the scarf tying part, she wanted it exactly how mom does it -“like a ball” and when he finally gets it, her big smile was more than enough reward for him.

Right now is a great time to sharpen the little skills, Fine-tune the little habits, and find joy in the little things. I was not getting this right, trying to wrap Anaya’s head wrap but she coached me through it and we made it together. I was especially happy that she was patient with me during this time, when I know she just wanted to call @mrsmelanin. Remember, it’s about the little things. ? Song: @indiaarie “Little Things” Wrap by: @shopmarlobea

Dave, a musician, began his Youtube channel with his own music. When he featured his adorable daughter, Claire singing with him, it went viral. Claire will steal your heart with the sweet duet she sang with dad.