Did you watch day 16 of the Big Brother Naija 5 reality show? 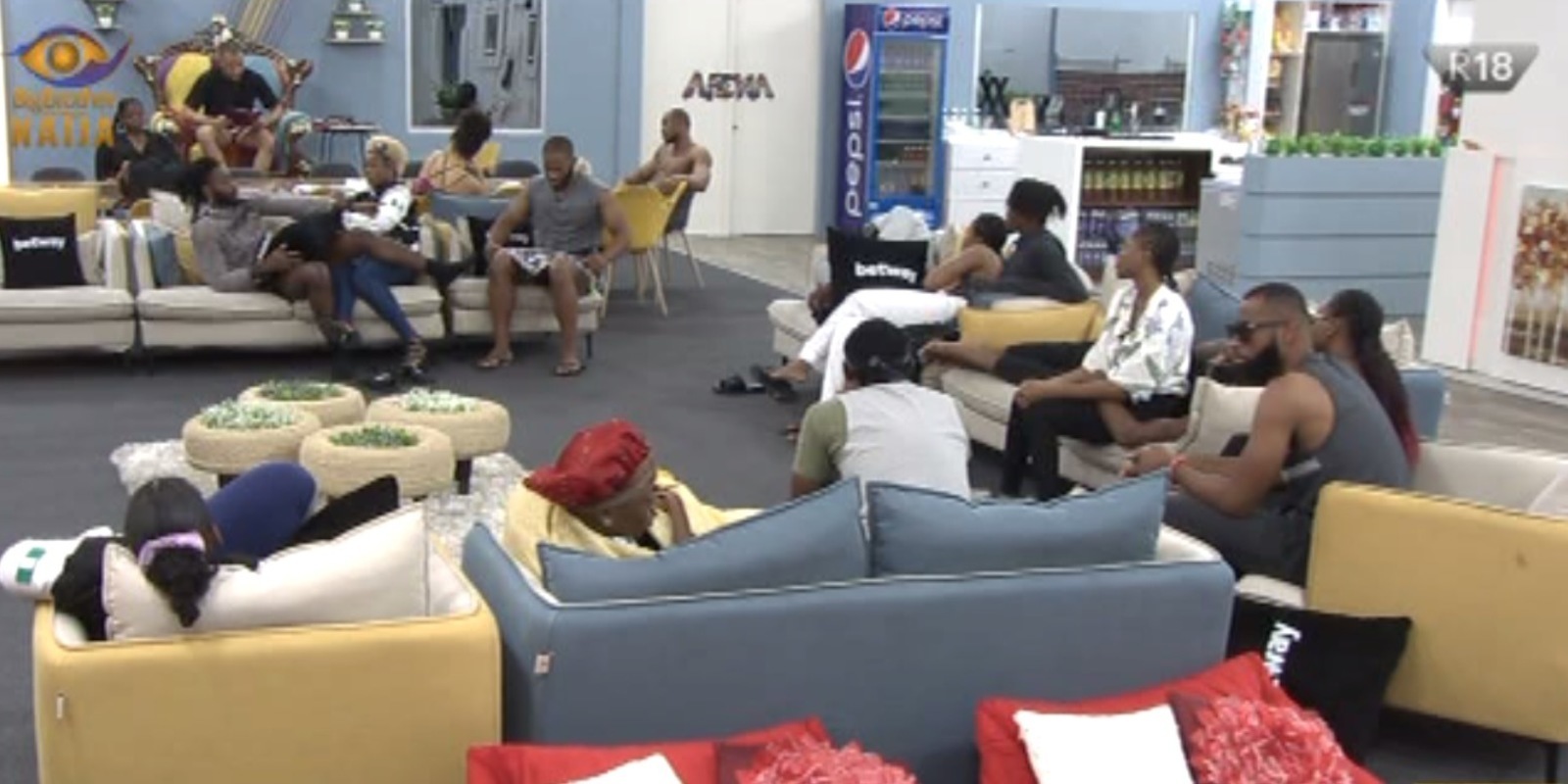 Courtesy of Flutterwave, the Lockdown housemates were challenged to put on their creative thinking hats and make magic.

For today’s task, the Lockdown geng were required to form 4 teams.

Flutterwave is an African payments technology company touted as having the most modern infrastructure for online and offline payments, in the continent. With this in mind, the housemates were instructed by Biggie to create a Flutterwave store with selected products using cardboards, and an advertisement campaign for the store. This challenge presents an opportunity for the housemates to celebrate the key role of small businesses in Nigeria by creating advertisements for their curated stores.

This task was divided into phases and spread across the day.

Who rocked it better?

To provide a level of comfort and uniqueness to this task, Flutterwave provided the housemates with team merchandise.

Trust our Lockdown geng to sprinkle some slayage on the merch.

Each team was required to write down their team name and team members on the notepad provided. They were given A5 sized cards containing products which the housemates used to create their teams’ Flutterwave store. Each team was to come up with a two-minute advertisement campaign to be presented in the arena. To aid in their preparation, Flutterwave prepared their currently running television advert for the Housemates to watch. How creative is your favourite Housemate?

Some of the housemates did well during their Flutterwave Wager, others, not so much. After a day of rehearsing, well mostly, we saw the housemates go into the Arena to present their final Flutterway adverts and presentations. 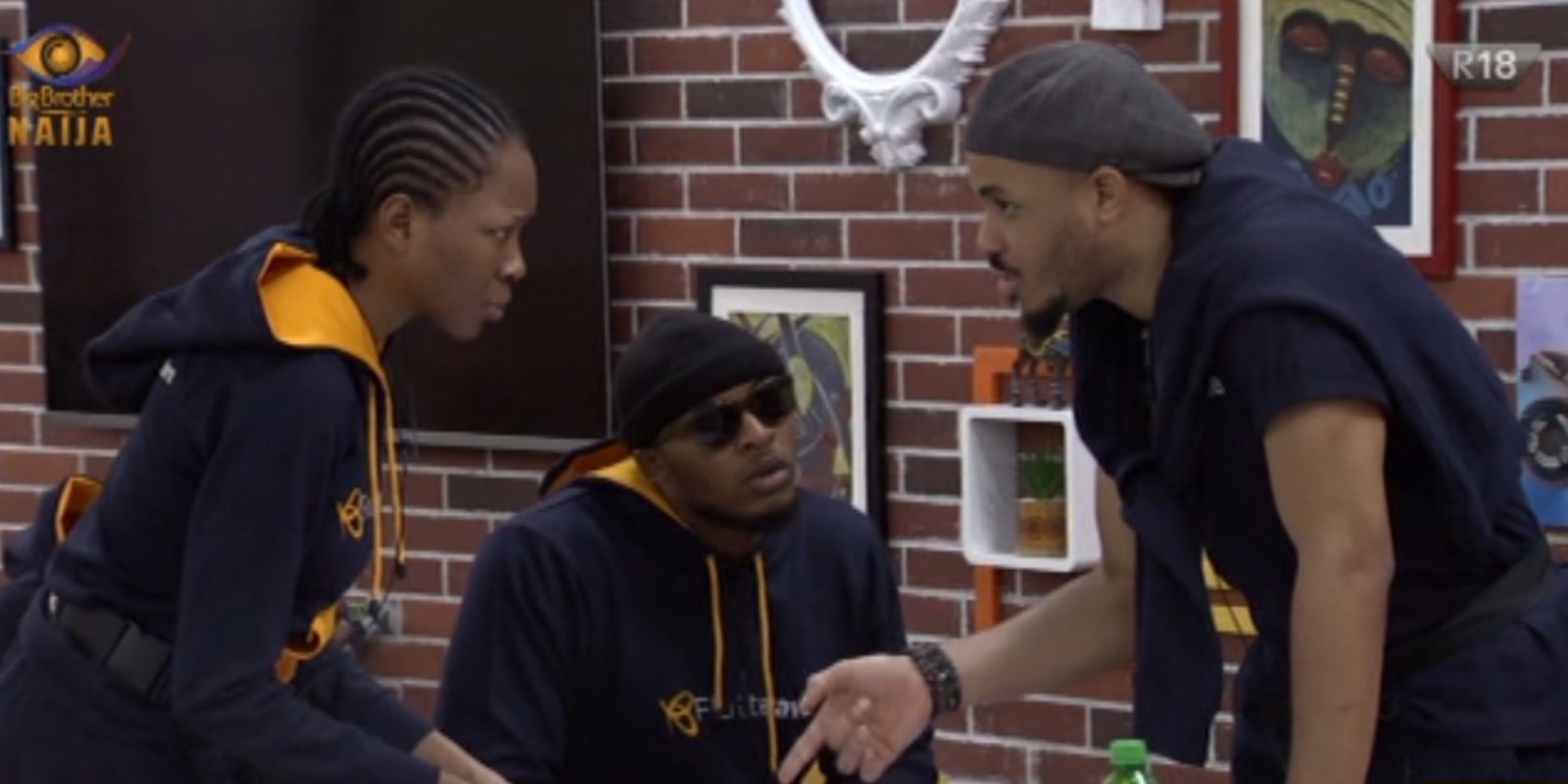 Team EVON which includes Eric, Vee, Ozo, Neo chose to present group-pitch style, with Ozo beginning the presentation with their speech about nature being health. Vee put her best presentation voice to get the Housemates attention, pointing out her own hair and Neo’s skin as an example of perfection, leaving Neo to take over and continue explaining. Neo stole the show, relatable as ever, speaking to his peers in a way that they will understand, leaving Eric to explain the technical aspects of the Flutterwave value proposition, before the buzzer rang.

Team Glow Up was represented by Prince, Lucy, Nengi, Dora, Praise. Choosing Prince as their spokesperson while the others supported as silent billboards around him to help him make his point. Prince took us through some of their business specials as he tried to convince the Housemates that their products are superior and affordable.

“Your beauty is our utmost priority” 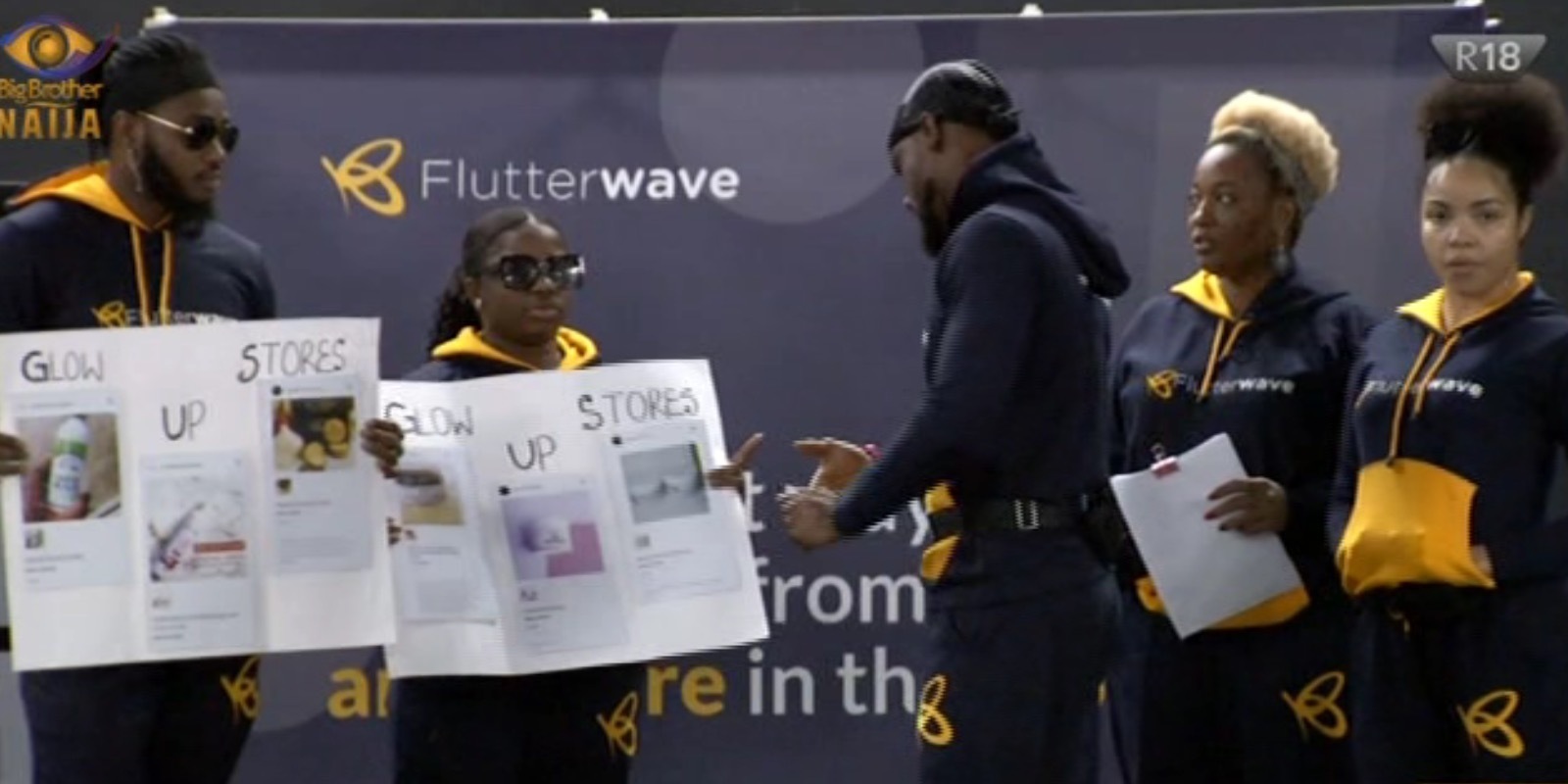 Surely the team who took it away was team KEBT who started with an introduction from Kiddwaya before they enacted an actual advert.

KEBT Naturals was represented by Erica, Tochi, Tolanibaj Brighto and Kiddwaya and after the introduction, we saw two couples coming together, with the one couple introducing the other to KEBT Naturals and Flutterway. Tochis beard was the star of the show as this was where the story began with Tolanibaj who was acting and Brighto’s wife, asking where he got the products to make his beard so full when her man (Brighto) was struggling like this. Shade. 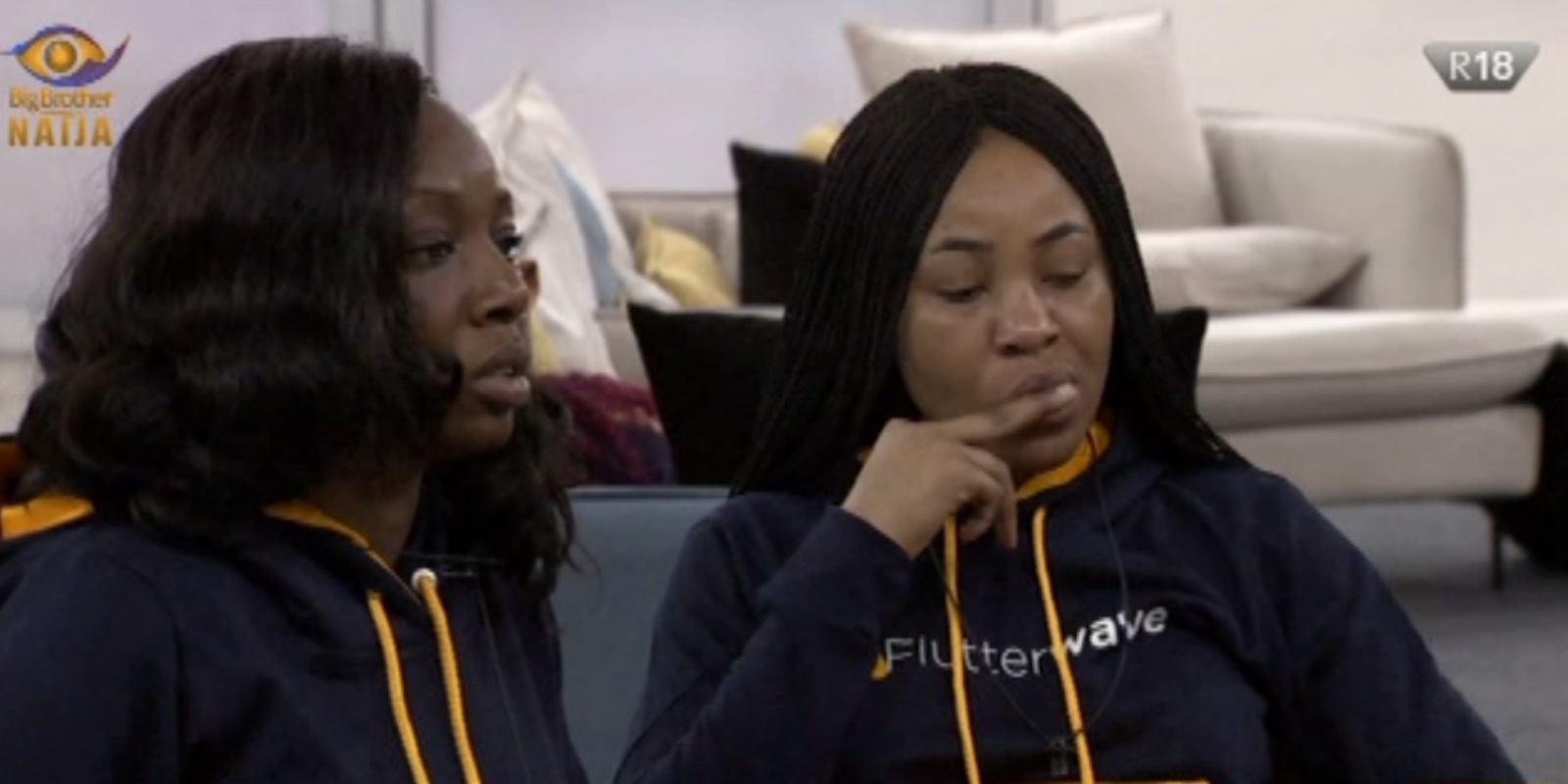 Beautiful Stores was represented salesman style by Trikytee while the rest of his team: Kaisha Wathoni and Laycon stood around and let him make the pitch. Kaisha and Trickytee later spoke about their regret for doing the Wager this way as they did not know they could get active.

Needless to say, Team KBET Naturals and Team EVON won and made it into the next round, with Biggie explaining to the other teams, through HoH Ozo, that those who did not win must rather sit and watch how it’s done.

From the first minute they graced our screens till this very second, these Housemates always come through dripping with their Lockdown fashion statements.

Enviable personal style is something many of us aspire to have, unfortunately, the game of drip isn’t known by many. So, if you’re looking to be inspired by the fashion gods, then look at these housemates who keep true to themselves through their awesome personal style.

So, in no particular order…

This Housemate can essentially do no wrong. Whether he’s just staying locked down in Biggie’s House, presenting during a Task or partying hard at the Saturday Night Party, he’s always available to serve the best male Lockdown looks. We personally love how best Neo pairs his durags with almost every outfit and the way he slays his looks from head to toe… you can never catch him slippin’.

You can tell that Tolanibaj just moved from the United States of America, seeing as the city’s punk attitude has made its way into her wardrobe. Often showing off her enviable sunglasses game, this member of the cool kid’s gang mixes streetwear and ‘swag’ with ease. Oh, and her Lockdown Launch outfit? Mad!

The king of bandanas (no offence to Trikytee), Kiddwaya may well be the leader of the cool kids of the Lockdown House. His personality and alpha-male aura add to his fashion slayage and we can’t help but add him to the list. Whether it be a traditional attire, a colourful tracksuit or simple sweatpants and vests, the London-based Housemate sure knows how to draw attention to himself. Don’t even get us started on his accent.

The 22-year old housemate has come out as a surprising heavyweight when it comes to Lockdown stand-out outfits. Her famous bum-shorts and crops have found a way to feature in the Big Brother Naija House without having to fight for space. Also, a member of the sunglasses gang, Nengi’s relaxed style never fails to impress.

Her uncommon and highly talked about (by bae) launch outfit has won the Housemate a place on our list. Though we rarely see the ever-smiling Erica’s 100 per cent fashion style, her looks prove she’s a fashion chameleon, able to move from sweet to sassy with ease.

Prince’s personal Lockdown style lies somewhere near his fellow Lockdown slay god, Neo. He’s big on shirts, shorts, sweatpants and durags featuring heavily. Always simple with his fashion statements, Prince has subverted notions of what you expect a rapper to dress like, and that’s why we think he is cool.

He leans on classics like slim shorts, nerd glasses and a mix of durags and ‘kango’ hats. When you’re this annoyingly good-looking, you can afford to take risks with your style, but what we like about the way Ozo dresses is that it’s not at all-try hard.

Lockdown or not, you can never catch them unfresh!

Have you been watching? What did you think of the Day 16 activities?