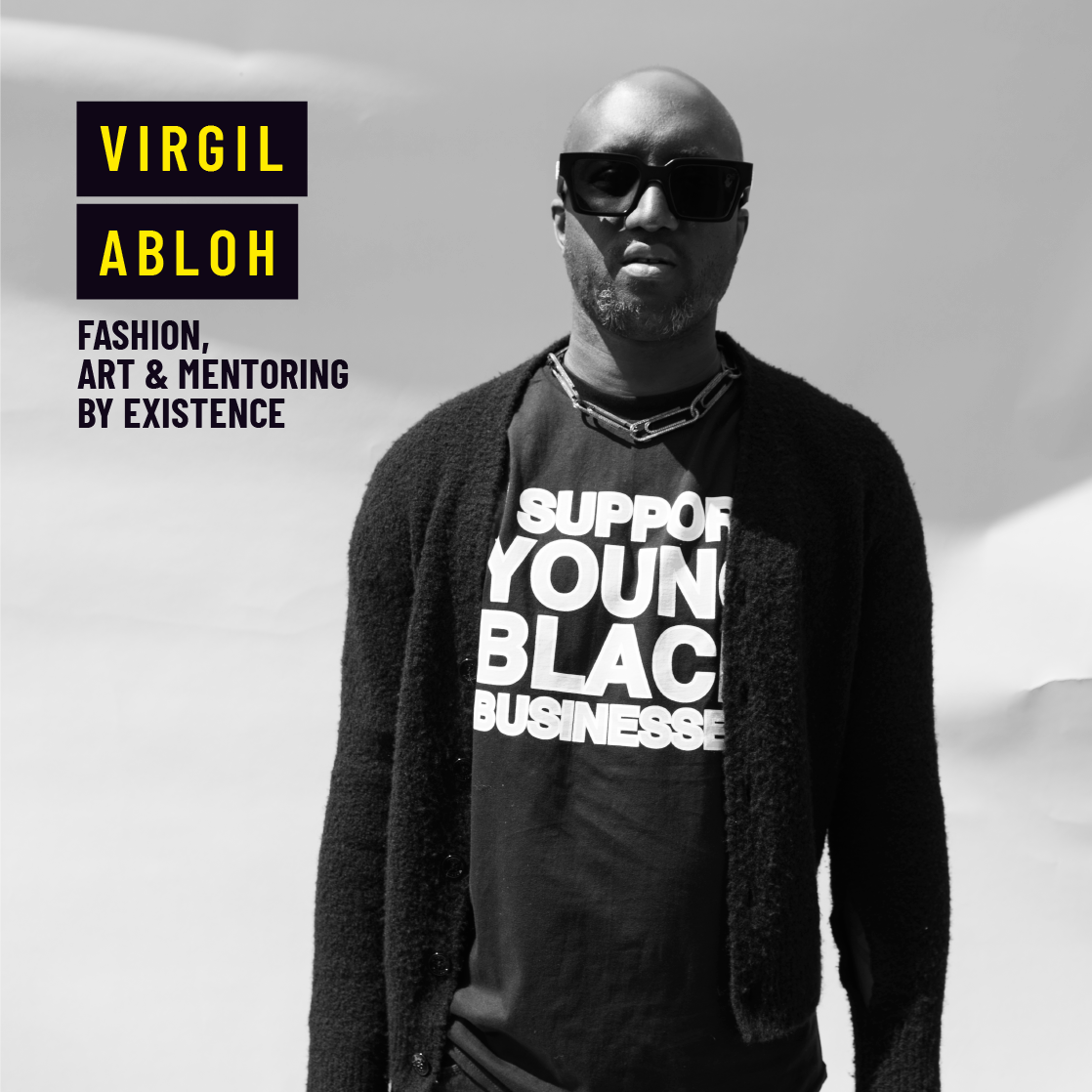 The Ethical Fashion Initiative launched the second series of its podcast dedicated to African stories on March 25th, with an exclusive interview featuring world-renowned designer of Ghanian descent, Virgil Abloh, who openly speaks on his experience of racism, his attempts to democratize luxury fashion, and his thoughts on social media.

Abloh, who is Louis Vuitton Men’s Artistic Director as well as the founder of Milan-based label Off-White, offers a radical vision of all forms of creative expression being equal. “An Instagram post is as much of an artwork as a 300-look fashion collection,” he says. “Something I made 20 years ago as a student – like my thesis [on] architecture … is just as valid as a new Nike shoe. There is no hierarchy.”

This makes sense, given his recent opening up of Off-White’s platform to emerging creatives via Imaginary TV. Abloh is smashing down the barriers to entry.

The designer goes on to credit his recent interest in Andy Warhol as having inspired his thoughts on what he calls, ‘mentoring by existence’: “I’ve been thinking a lot about [Andy Warhol] in the last 6 months” he says. “I think of course people get enamored with the aesthetic and the persona and everything, but he was able to sort of teach by existence.”

“My practice since the very beginning is open-source, it’s educational … I give out the codes I do these sort of talks, it’s a mentorship by existing. Rather than being like the wall is up, you can’t get an interview with me, you can’t hear about my inspiration, you can see anything I’m working on … I learned in the internet age and I learned that in my past, I was never given a license. And if I had learned that I could license myself, then my future would have been ready-made from the beginning” says Abloh.

Whilst noting that fashion has the power to unite, Abloh also touches on its ability to divide people. Fashion is “an industry that doles out identity. If we were naked we would probably be a version of equal but once someone puts on some garment, and another person puts on another one, then you start judging each person by each garment”, Abloh explains.

On his African heritage and its impact on his designs, Abloh recognizes the importance of exploring varied cultures throughout his work at Louis Vuitton noting: “when my dad would go to a graduation or when we had Ghana Fest in Chicago, he and all his friends would get together. He wouldn’t wear a suit, he wouldn’t wear a European suit, he would wear Kente cloth … and that is a fact of my reality, it’s not pop culture. The reason why I put it in the Louis Vuitton show, is because not sharing cultures on that stage gives people complexes and makes people think their culture isn’t part of the ecosystem … And, if I was 14 years old and I saw a Louis Vuitton show with that music and that style and that flair and I saw people wearing kente, I might not have been so private with my cultural heritage.”

Simone Cipriani (Founder and Head of the Ethical Fashion Initiative (“EFI”) and Clare Press (Sustainable Journalist and Writer), return to host the second series of the Ethical Fashion podcast, first launched in June 2020 to champion the power of discussion and explore the issues driving the ethical fashion conversation. The new series focuses on African stories in light of the EFI’s work on “creating jobs and regenerating the social capital in some of the most challenging environments, which is something we started doing in Nairobi, Kenya, in 2018” says Cipriani.

The 12 episodes feature emerging African designers, business leaders, and environmentalists, and explore a wide span of topics from creative entrepreneurship in Africa, to diversity and inclusion in fashion and wildlife protection. This series also sees the introduction of guest hosts, beginning with episode two, ‘Doing Business in Africa’ with Ghanian entrepreneur and impact investor Roberta Annan in conversation with CEO of Vodafone Ghana, Patricia Obo-Nai.

The podcast is available on traditional streaming services from March 25th, including Apple Podcast and Spotify. Tune in, and listen deeply.

About the Ethical Fashion Initiative

EFI is a flagship program of the International Trade Centre, a joint agency of the United Nations and the World Trade Organization. For the Ethical Fashion Initiative, lifestyle choices impact livelihoods. EFI creates and strengthens social enterprises in emerging economies to connect discerning international brands in fashion, interiors, and fine foods with talented local designers, artisans, and micro-producers. Savvy investors, pro-poor champions, and mindful consumers find value in a virtuous circle that creates not just premium products, but also stable, dignified work, and creative and resilient women, men, and communities.

The EFI’s Identity Building and Business Sharing Initiative showcases creativity and talent in fashion and beyond, in an effort to strengthen the cultural sectors including art, photography, cinema, and music. Operational in seven dynamic new countries — Cote d’Ivoire, Eritrea, Mali, Uganda, Iran, Uzbekistan, and Tajikistan — this chapter of EFI works in hand with leaders from the private sector to generate trade and more importantly, social capital. Find out more HERE or on Instagram @ethicalfashion.
This EFI Identity Building and Business Sharing Initiative is funded by the EU.