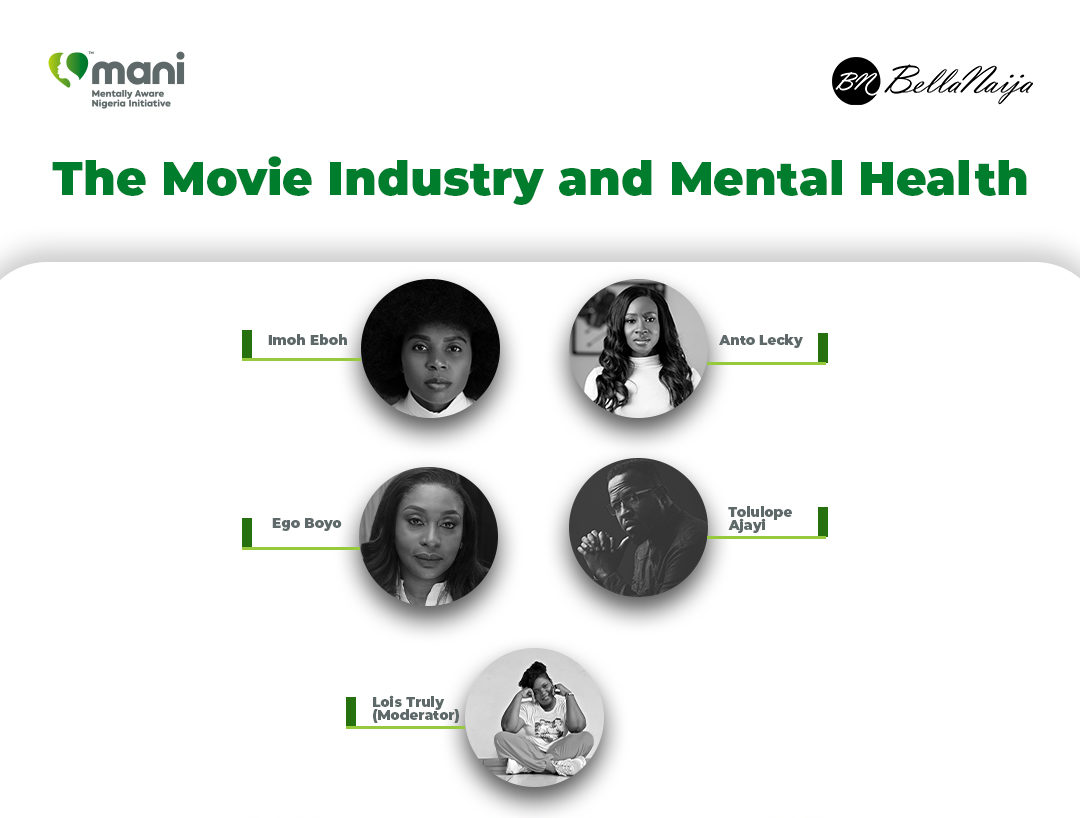 On Wednesday, May 5, 2021, Mentally Aware Nigeria Initiative (MANI) hosted a Spaces event on the Twitter platform as part of its planned activities for Mental Health Awareness month. The focus of this event was on mental health and the movie industry in Nigeria and it had in attendance Anto Lecky, Ego Boyo and Imoh Eboh.

The discussion started with questions ranging from movies that depicted mental health negatively and positively, to what people in the industry need to do to improve the accurate depiction of mental health in movies.

It was stated that that the movie industry is a money-making business, hence why movie scripts tend to exaggerate some scenes; after all, a movie aims to get the public interested to watch and make money. The panellists advised people in the industry to engage in extensive research when developing mental health-related movies, as this is important because the film has the power to influence and change perception. Anto Lecky suggested that more short films, web series like MANI’s “Oga John” are created to depict and drive these mental health conversations as this will be a nudge to get the attention of the big players in the industry.

When asked what happens during those periods of being without a job and waiting for the next opportunity, Imoh Eboh said she practised a habit of saving. “Every little money I had, I started saving. So, since I finished Riona, I have been using money from there to sustain myself and get other things done as an actor. And then, I have the privilege of a house that I stay in for free.’’

Anto Lecky talked about how getting into character for a movie sometimes messes the mind;

I remember I had a role where I had to play a young girl who ended up getting pregnant at a really young age and I didn’t obviously experience that kind of thing in my real life so even being in that environment would be shocking, it really like totally messed me up, like I just, I feel like the emotions that I put into acting were for me realising that people actually go through this in real life. Portraying a role really does take a lot, it takes a lot even for me as a newbie that is not trained so well, maybe for me because I don’t have proper training.

Ego Boyo, who has been in the industry for thirty years plus commended the growth of awareness in mental health. She said;

In the last few years, there has been so much awareness about mental health issues and efforts to break that stigma which still exists, but I think more than ever, people are realising that it doesn’t serve anybody, anywhere, any good to suppress your feelings but to reach out and ask for help when you need it. We are getting to the point where people are more aware, of course, it’s not going to change overnight because we’ve been told as a generation to get on with it and it’s changing.

She also commended MANI’s role in promoting mental health awareness in the country.

A general question was posed on how to cope with the pressures of a role, social media and public expectation to which Imoh Eboh answered with “I just do my work, I focus on my work. Whenever I come out, I am coming out with my affirmations.’’

I would say my entry into the industry was because I was on a reality show and was heavily induced by people’s opinions of me. To be honest, in the beginning, things were really hard. I thought I had to live up to some kind of expectation, even till now – luckily it died down a bit. Well, it really took me some time to look inward and realise that social media is not the end of it all and Mark can vex and turn off Instagram, Jack can vex and turn off Twitter, so I had to realise that my life is so much more than what’s on social media, but it actually took me some time. Social media is not the only thing although it is an aspect of our lives but it is not the end or be it all.

Ego Boyo followed with “I wasn’t born in the social media age, so there’s really no pressure for me in trying to be anything other than who I am. Social media is just a very tiny part of your life. You just have to be happy about who you are and what you want to achieve. The most important perception is of yourself, who you think you are and what you love about yourself, that’s the most important thing.”

On unhealthy practices in the industry and how those in the movie industry can improve their mental health, Ego Boyo and Imoh Eboh both agreed that substance use and abuse contribute to poor mental health. Anto Lecky buttressed the importance of financial planning and management, “As an individual in this industry some days, you will be hot, sometimes you won’t. So, I think it’s very important that people take their financial planning and management very seriously.”

Ego Boyo went further to say that: “I think one of the things is just being aware of your mental health, and what you need to do to protect it. Be very careful about what you put in and what you take in.”

She also stated that:

It is important that we as filmmakers make sure that we provide a secure, safe environment for the people that are working with us. We’ve been reading a lot about all the different things that have happened to young people who have travelled to different places to find jobs. And I know that two years ago, or a year ago, there was a lot of talk about unsafe practices in the movie industry; how especially young women were exposed to all sorts of conditions. And that’s another thing that can affect people’s mental health; people that are in unsafe work environments where they find themselves being sexually harassed, or abused. And that’s one of the practices that we must make sure that we put a stop to – we have to provide and create safe environments for everybody.

This is the first of several Spaces events organized by MANI with support from BellaNaija for Mental Health Awareness Month in May. You can find out more information by going to any of our social media platforms on Facebook, Instagram and Twitter.