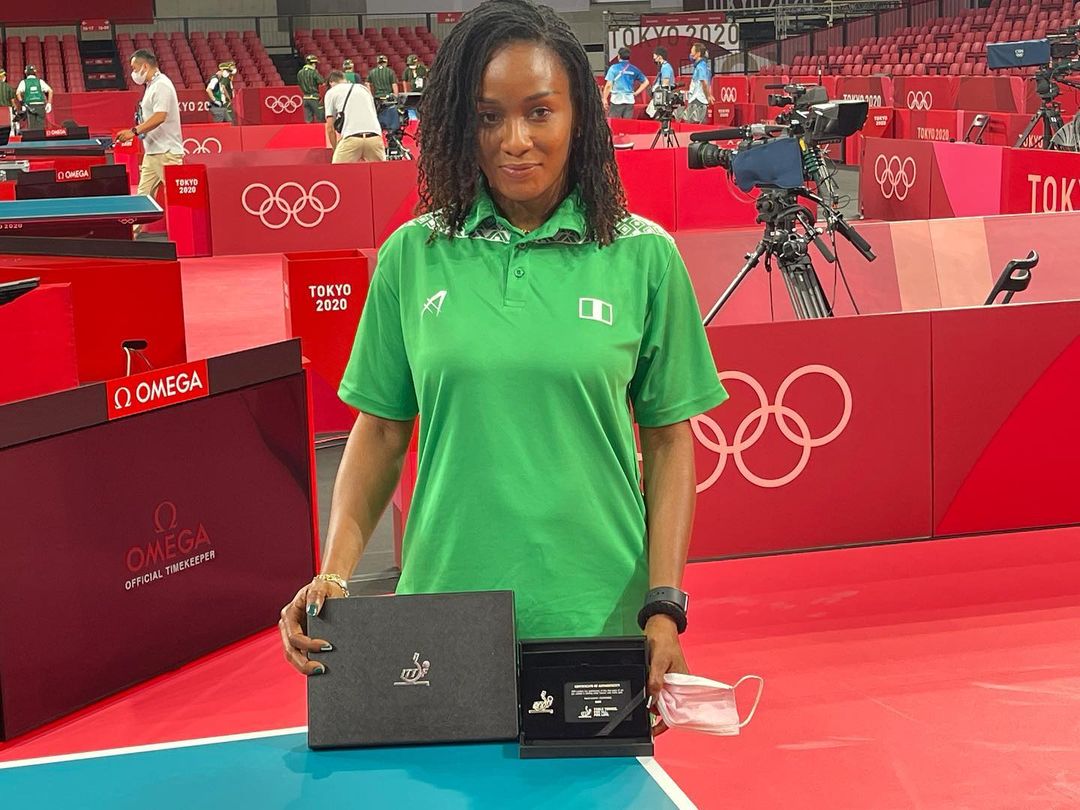 Congratulations are in order for Olufunke Oshonaike, the table tennis champion who has made her mark as the first African woman to compete in the Olympics seven times. The 45-year-old is holding on to that as she gracefully bows out of the preliminary stage of the 2020 Tokyo Olympics.

Funke exited the competition on Saturday, 24th July, after losing to United States’ Liu Juan at the Delayed Games. However, Funke believes she has “done exceedingly well at these Olympics” overall, as she remains proud of getting another special opportunity to represent Nigeria at the Olympics, she told BBC Sport Africa.

I may have lost early but I have to count my blessings, to attain a seventh Olympics as the first woman from Africa to do so is a remarkable thing for my career.

Just think of it by multiplying four years by seven, then to be a part of this unbelievably special Olympics in Tokyo. Being the first African, first woman in Table Tennis to do it seven times, puts everything into proper perspective for me, so I have to be grateful.

Funke also told BBC that she is ‘done’ with the Olympics and needs to “focus on helping the younger ones attain their dream”. The tennis champion who has played for about 30 years says she will keep playing and giving her best to the sports, and will probably be an official or watching as a spectator the next time you see her at the Olympics. “I will be the first to walk away if I can no longer keep up the pace or give my best on the table,” she added.

Although her time at the Tokyo 2020 Olympics was cut short, Funke is signing out on a very high note after making history as the first and only woman in table tennis to be a 7-time Olympian.

For this, the 25-time table tennis champion, 11-time All African Games medallist and three-time International Table Tennis Federation Africa Senior Championships winner, according to BBC, was inducted as a member of the exclusive table tennis ‘Club 7’. Here’s what she had to say about the inauguration on Instagram:

Though I might not have won Gold, silver, and bronze! But what I got is what no other woman in Africa or in the world of Tabletennis has got?????

I have just been inducted as a member of the exclusive 7th Club being a 7 Time Olympian?? The only woman 7 times Olympian in Africa ??The first woman in Table Tennis world ?? Dreams do come true?? I am a living Testimony??

Welcome Funke to the 7th club Award?????? Thank to you my beloved country Nigeria ??❤️ Thank you my fans all over the world ❤️ Thanks to my family and friends❤️

Last but not the least, Almighty thanks to my creator for sustaining me to see this day. I am indeed Grateful ❤️ #007(Olufunke Oshonaike 7)

Funke who began playing table tennis when she was 14 and joined Nigeria’s team for the 1991 All Africa Game two years later, first competed at the Olympics in Atlanta in 1996. Subsequently, she played at the Sydney Games in 2000, Athens in 2004, Beijing in 2008, London in 2012 and Rio in 2016 where she lead out Team Nigeria at the Opening ceremony as the country’s flag bearer.

It was at the 2016 Rio Olympics, Funke’s 6th attempt where Segun Toriola became the only African with 7 Olympic appearances, that she was inspired to make another appearance and join the 7th club which she described to BBC as a “table of men”.

Other previous members of the club of seven include Zoran Primorac from Croatia, Jean-Michel Saive from Belgium and Jorgen Persson from Sweden.

Funke further told BBC how the last five years were emotionally, physically and mentally challenging as she prepared to qualify for the Tokyo Games, even with the coronavirus happening and doubts creeping in.

I endured a challenging five years mentally, physically and emotionally, all of this when I still had to deal with qualification for the Tokyo Games. After qualification, the coronavirus pandemic happened and then doubts started creeping in, I said probably it was not meant to be, then the cancelation happened.

But here we are, a tough journey and I can finally say that I have completed the Olympics circle in a special way and at a special Games in Tokyo.

#BNCelebratesOlympicsExcellence is our special column spotlighting inspiring stories from and about Nigerian athletes at the #Tokyo2020 Olympic Games.