According to the World Economic Forum’s 2021 Global Gender Gap Report, it will take an average of 135.6 years for women and men to reach parity on a range of factors worldwide, instead of the 99.5 years outlined in the 2020 report. This report shows one thing: another generation of women will have to wait for gender parity.

Although largely ignored, gender inequalities have been in existence since time memorial, however, we are now at a time when equal representation and equal rights have never been more important, more in focus, or more at risk. Gender disparity, in Africa, is worse. A 2019 report from Global Partnership showed that not only are 70% of women excluded financially in Africa, the continent also has a US$42 billion financing gap between men and women. It would also take Africa 140 years to achieve gender parity. It has thus become critical to come together and find solutions to the pressing needs of women in the society. 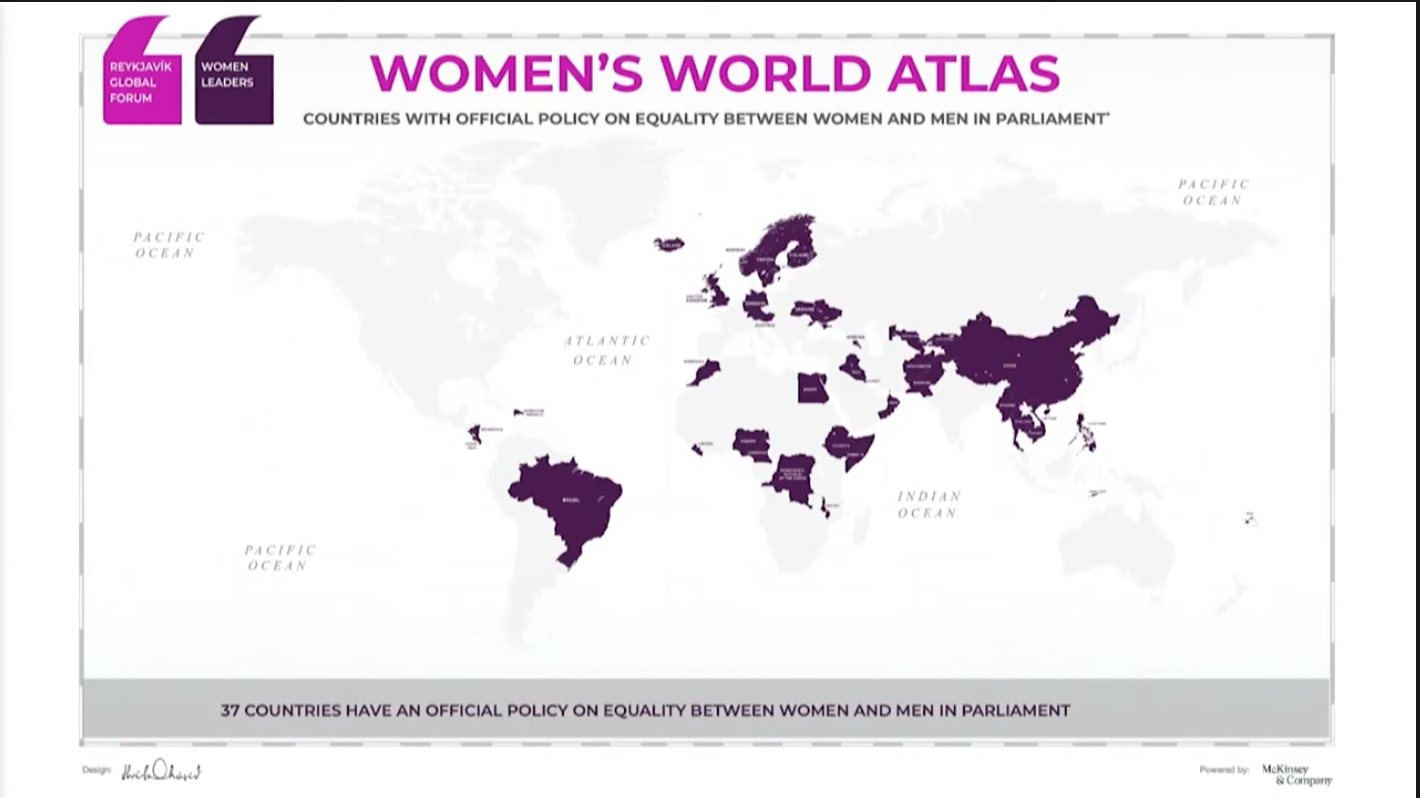 On the 9th and 10th of November, 2021, Women Political Leaders (WPL), the Government of Iceland, and the Parliament of Iceland hosted the fourth annual Reykjavík Global Forum, and women from all walks of life came together to power together for progress. The Reykjavík Global Forum for women leaders wasn’t just a conference, it was both a convening of women leaders charged with the responsibility of ensuring equal representation across all nations, and a community of women who would transform this globe for inclusive sustainable development.

The 2-day event had women leaders from all walks of life talk about tackling gender disparity in the world, powering for progress and building forward differently. In attendance were women leaders and founders from Africa who shared their opinions on how the continent can close the gender gap, how African women can have the power, presence and pride in being leaders, how women can have their voices heard and be involved in decision-making, and how the continent can mitigate the risks of climate change. 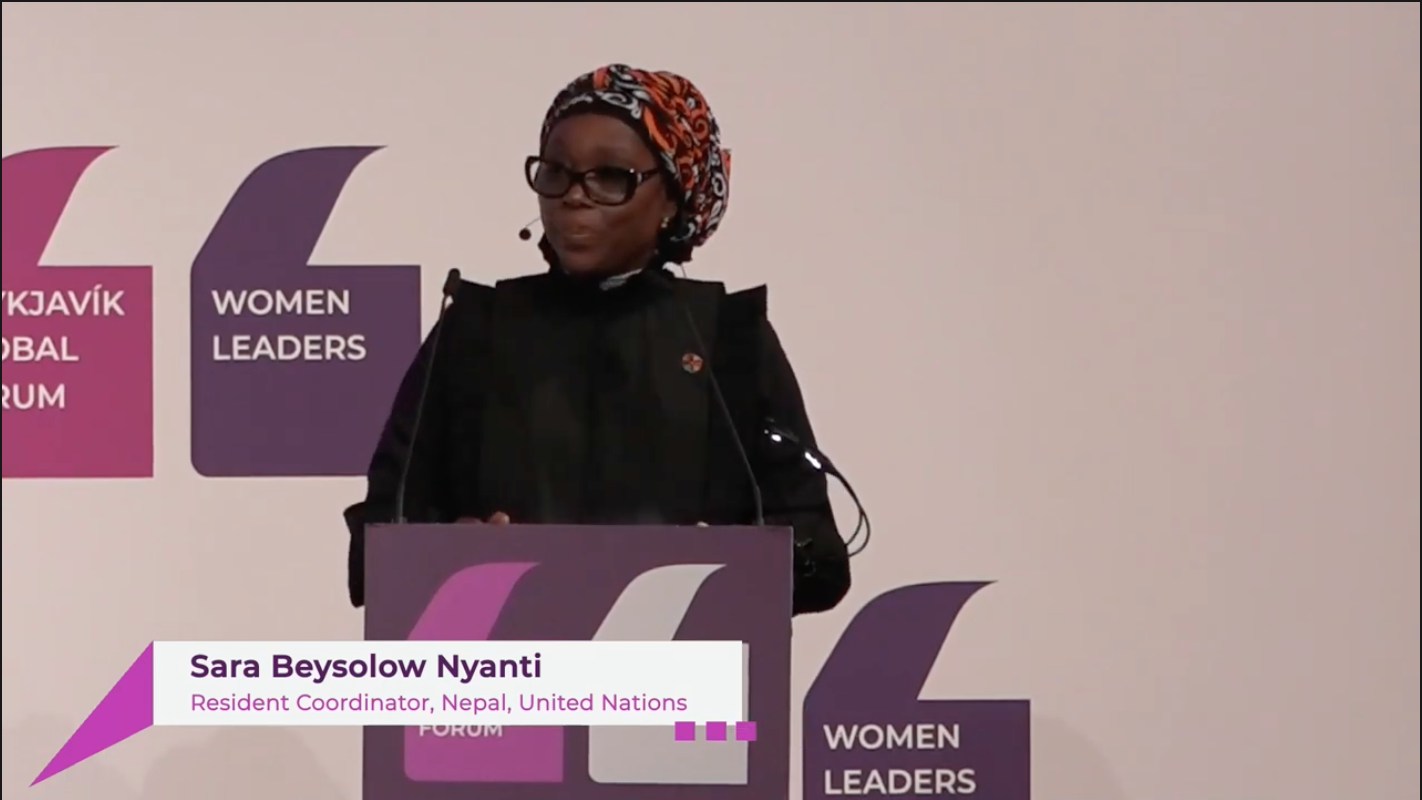 Sara Beysolow Nyanti, Resident Coordinator, Nepal, United Nations, while moderating Day 2 of the event, mentioned the need to flip the script. According to Sara Beysolow Nyanti, for the narrative on leadership to change, we have to disrupt and innovate. She also mentioned that there’s no ground zero without women; ground zero represents a place of rapid and intense change, and we can no longer have it without women.

Making laws and policies are great, but what happens when there are no real-time changes? To enact real-time changes, Sara Beysolow Nyanti said there’s a need to go from policies to action around the world. Liberia, for example, has policies on gender equality in terms of parliamentary representation, yet out of 103 seats in the House of Representatives and the Senate, only 10 are women. Still, Liberia is ahead of many countries who, when the maps about countries with official policy on equality between women and men in parliament was shown, were not on the map because they had non-existent gender equality policies.

The benefits of achieving gender parity in the world are numerous and they transcend into real-life and all-round solutions to pressing problems. During the conference, Amina Muhammed, Deputy Secretary-General of the United Nations, in talking about addressing the climate crisis, said that globally, the emissions growth rate by companies with more than 30% board members was almost 6 times lower than companies with no women board members. While addressing why women leadership is crucial, she said “we cannot build forward together and address the climate crisis without building a world where women are equal partners with an equal share of opportunities, power and participation.”

Beyond achieving gender parity, having women on board is immensely beneficial. Amina Muhammed said that “electing women politicians can result in ambitious climate actions and the presence of more women in governing boards is resulting in sustainable business practices and opportunities.” One way to achieve this, according to Amina Mohammed, is to “work together to increase the number of women in leadership, and we must amplify the power of those who are already leading.” 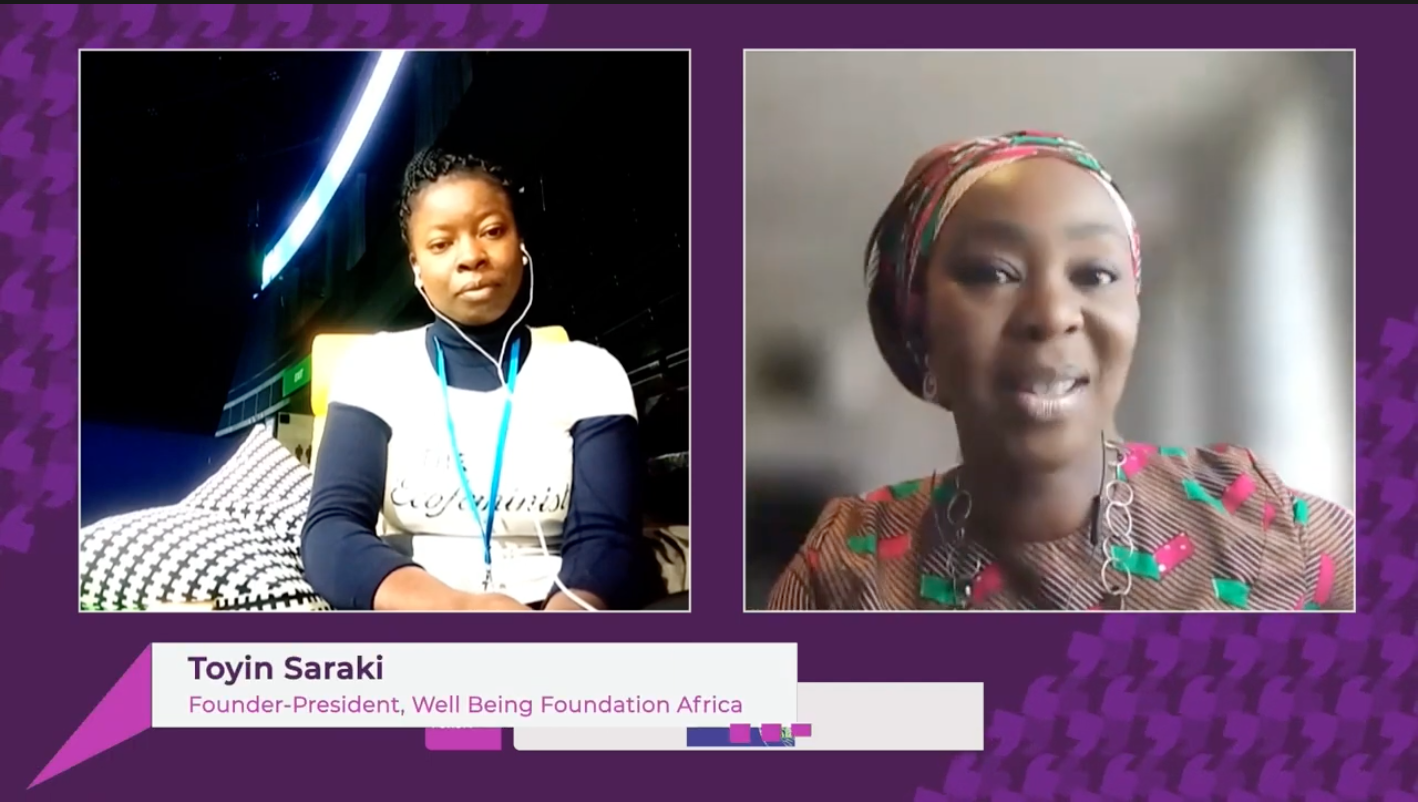 Toyin Saraki, also addressing the issues of climate change in the world said, “We’ll need to empower change makers across all the countries,” and of course, these change makers must include women. She also said that, “Because we work directly with people at the front-line, we need to always integrate sustainable development goals as our guiding framework to ensure just and inclusive transition where nobody in the society is left behind.”

Beyond including people in decision-making where climate change is concerned, it is also important to bring in solutions that will benefit everyone, even at the grassroots level. Toyin Saraki mentioned that “to achieve net zero, we would need a mix of approaches that are tailored to localised characteristics, our geography and societal needs and our levels of industrialisation. It’s not going to be one bit fits all that we will use to get to net zero.” 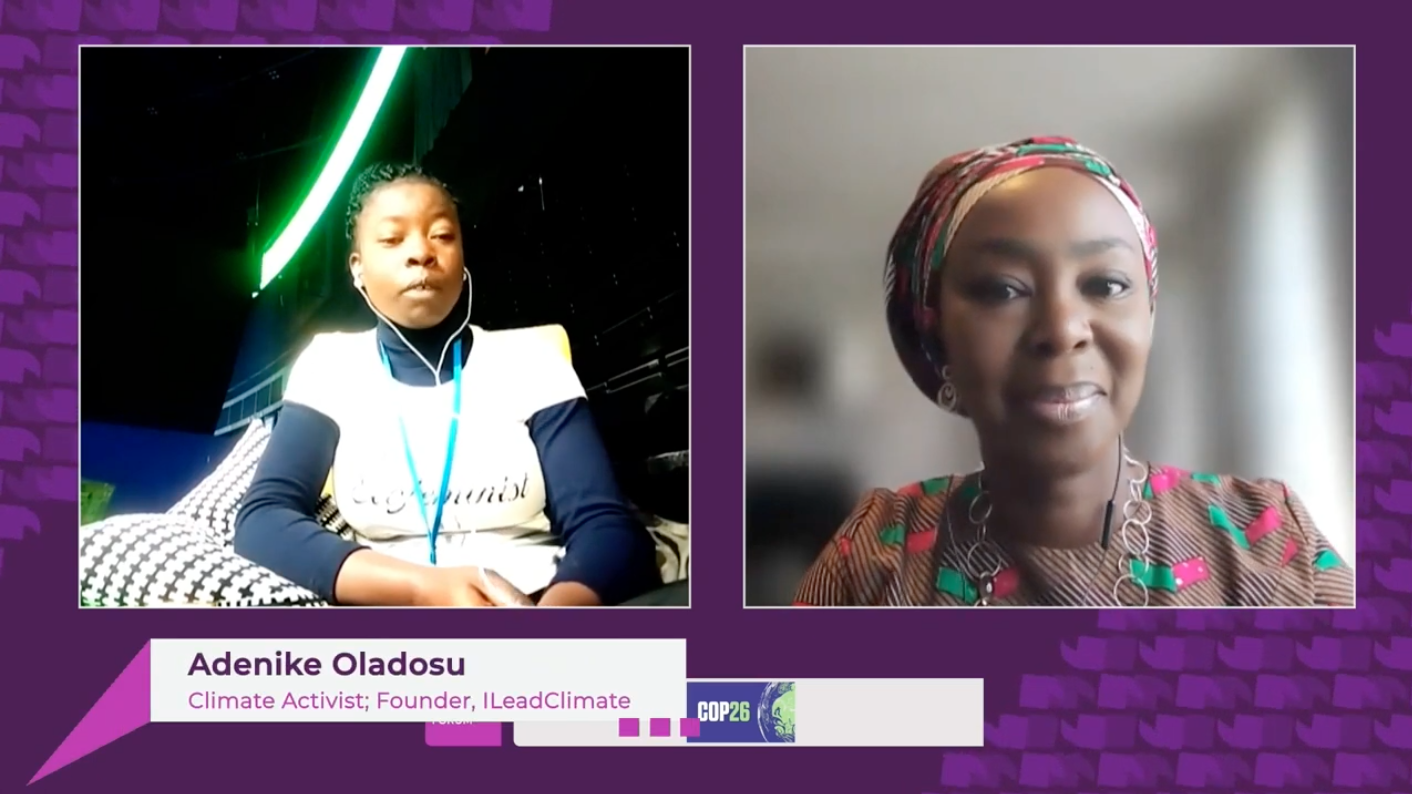 In some African cultures, women do not have the right to own lands, even though statistics show that women produce 60-80 percent of the world’s food production. Adenike Oladosu, an eco-feminist and the founder ILeadClimate, said during the conference that to tackle climate changes, “we need to have more women in the negotiation and discussion room, have their voices heard and listen to their meaningful contributions.” Adenike believes that women having equal access to land will not only increase food production in the world, it would also contribute immensely to reducing the risks of climate change as women are more inclined to build more trees and tend to gardens. “As an eco-feminist, I believe in a world whereby women have a safe space where they can exercise their rights without any form of injustice, and also have access to land because to a certain extent, we have to break free from traditional, social, and other barriers that affect women’s rights.” 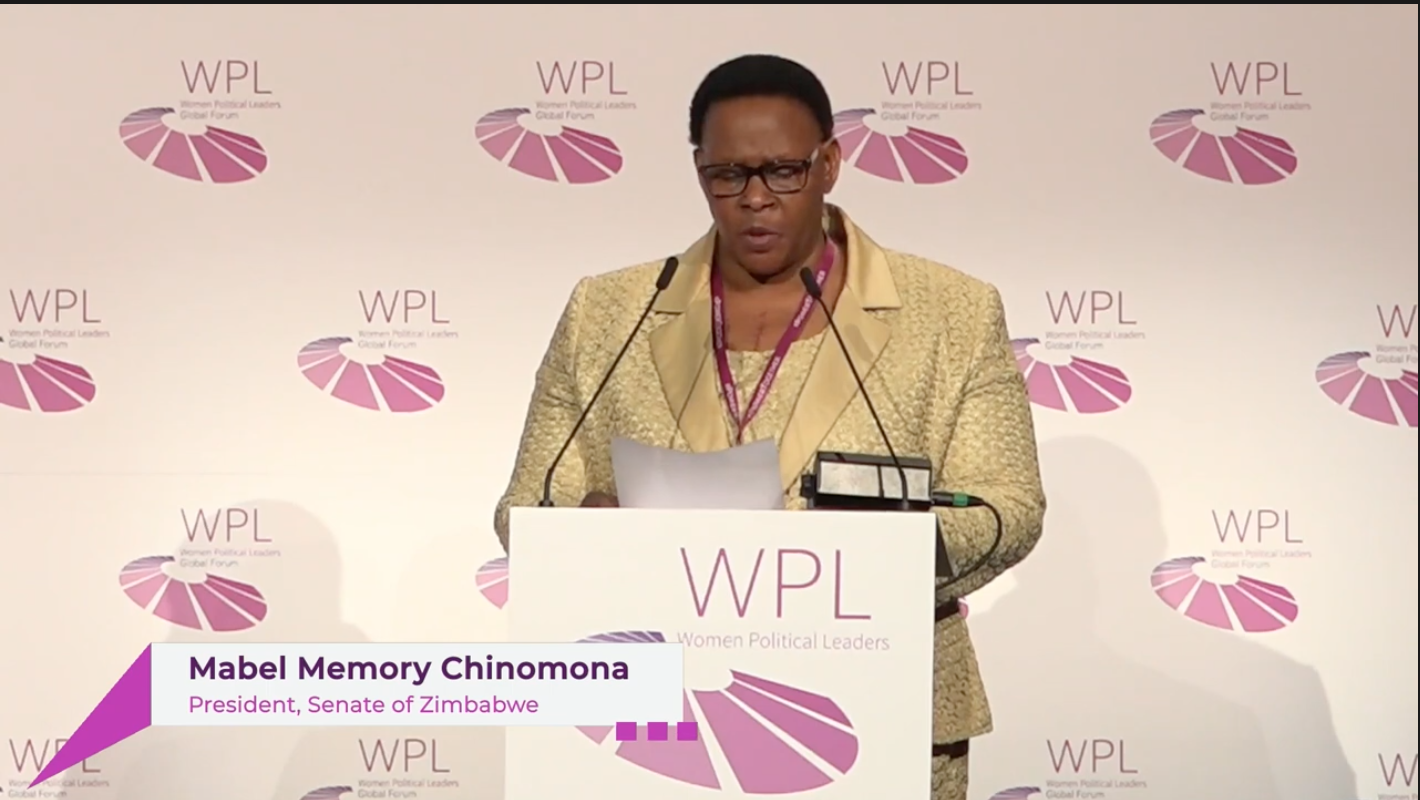 The COVID-19 pandemic may have widened the gender gap and deepened inequities in the world, particularly when it comes to women and girls, but the gathering of women leaders at the Reykjavík Global Forum proves not thing: women are not simply standing, arms akimbo, and doing nothing; they are pressing forward and creating spaces where other women can contribute meaningfully to the world’s discourses, and also thrive. Still, there is more work to be done. Mabel Memory Chinomona, President, Senate of Zimbabwe, said, at the conference, that it is important for women to carry the conversation forward regardless of the circumstances COVID-19 threw the world into.

As we press together for progress, there’s one thing we must never forget to do: carry the younger generation along. 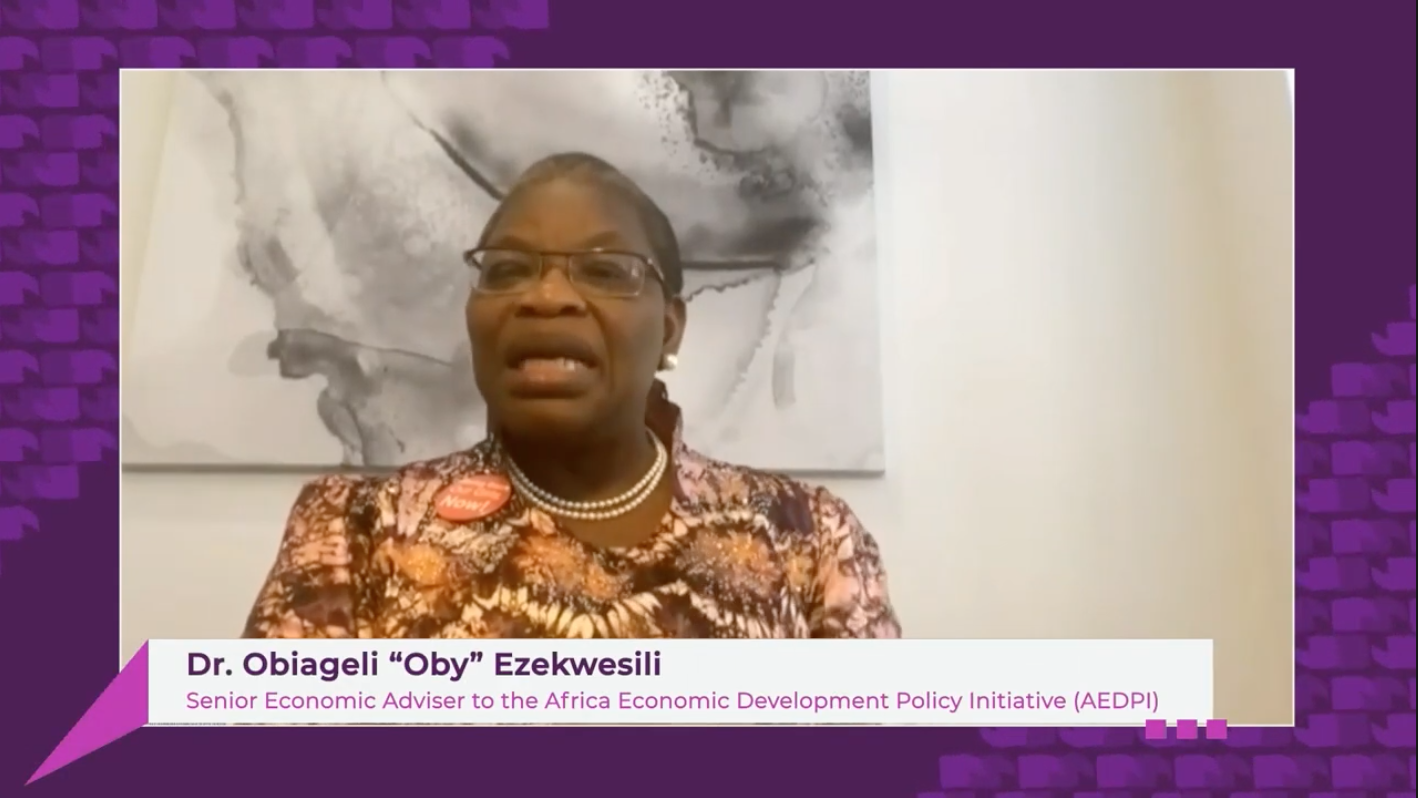 At the conference, Oby Ezekwesili talked about the need for women leaders to work with Gen Z, and not look at them as people who are unknowledgeable because they were born in the 90s or 20s – they are smart and are in the know. She said, “We must recognise their ingenuity and work, and come to the table with them on the matter of democracy.”

Oby Ezekwesili dream is to live in a world “in which the younger women coming behind us don’t have to knock down the door before they can express all that they carry.”

Beyond the Reykjavík Global Forum, women must continuously fight for a world that not just includes them, but also involves them in top decision and policy making. Sara Beysolow Nyanti says that “Nothing is done until every World Atlas page is fully purple.”

Burger King Launches in Nigeria, bringing “The Real Burger Experience” to the Giant of Africa