Get to Know Rwanda's Mukansanga Salima Rhadia, the First Female Referee to Officiate an AFCON Match 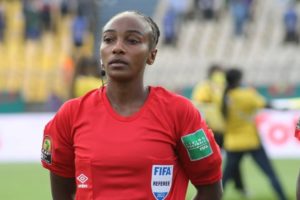 As the continental men’s Africa Cup of Nations – a 65-year-old biannual event first held in Khartoum in 1957 – got underway, many eyes were firmly fixed on one stand-out referee, Mukansanga Salima. Mukansanga is the first-ever woman to officiate in the games and is one of 24 centre referees among the 63 official umpiring at CAN 2021.

The event was due to be held in 2021 before falling victim to the Covid-19 pandemic. Now, with high-profile sponsorship deals, a new management team behind African football, and the attendance of some of the world’s top footballing talent, the event has attracted the attention of football fans worldwide.

Likewise, Mukansanga. She is one of a team of women- including Carine Atemzabong (Cameroon), Fatiha Jermoumi and Bouchra Karboubi (Morocco) – who are officiating at the competition. Karboubi is a video assistant referee while Atemzabong and Jermoumi have been assigned side referee duties. 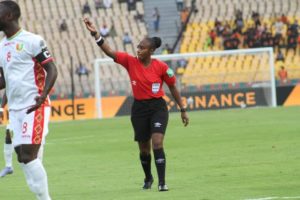 Mukansanga, who took charge of her first match – a game between Guinea and Malawi – on January 10, is hardly new to officiating men’s games; she has officiated Rwanda’s men’s top-flight for several years. And she’s always been keen on the sport. “I played football when I was in high school, but it was more for fun. I never played at a high level. I haven’t played as a professional player because, otherwise, I am a nurse. It’s just that I loved football so much that I wanted to have something to do with it,” she explained.

Born in Rusizi District in the Western Province of Rwanda and now 33, Mukansanga holds a Bachelor’s degree in nursing.
In 2007 she plunged into refereeing. It was not an easy start.

“We started training as five girls out of more than 40 men, but no other girl continued. It’s a difficult thing because there were times when I was feeling discouraged. There were a lot of people who were discouraging me… saying that becoming a referee can’t help someone to make a living,” she said during an Interview with IGIHE, a Rwandan Kinyarwanda online news website.

But she was determined to soldier on. 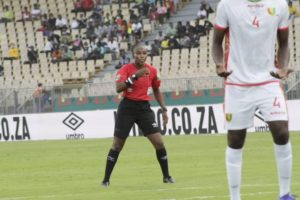 “I kept the spirit to pursue my dream career because that was where my happiness was. That’s what kept me going. They told me that it was a waste of time, but I knew that I would succeed,” Mukansanga added.

One of the challenges she had to confront and overcome was the mode of dress for referees. Religious decrees made wearing the usual uniform a possible point of contention.

2012 marked her real plunge into refereeing at a higher level; she became one of just five FIFA-certified women referees in Rwanda who were qualified to referee international assignments. Two, including Mukansanga, were centre referees and three were side umpires.

In her international assignments, Mukansanga started as the fourth referee and it was only after a two-year wait that she got a chance to officiate at the centre, during an Afcon qualifier match between Zambia and Tanzania, in 2014.

She has never looked back, being picked to officiate at various international competitions including the 2015 All Africa Games in Brazzaville and the 2015 Women’s CECAFA in Jinja, Uganda. 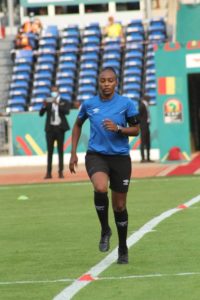 “This is a historic day for African football, especially in football. You have shown everyone that you can do well and everyone in the stadium, including both teams, is happy with your performance,” Ahmad famously remarked after the match.

One of several women referees at the 2016 African Women’s Cup in Cameroon, she officiated in the Under-17 World Cup in Uruguay in 2018, including a match between Germany and Canada and, in 2019, officiated the Women’s World Cup in France.
In 2021, she made history by becoming the first Rwandan to officiate at the Olympics, starting with the game between the United Kingdom and Chile in Tokyo.

One of 20 African professionals who have been awarded a one-year contract with CAF, her determination has brought her to a point that none of her colleagues could have imagined when they started their training, back in 2007. Talk about breaking glass ceilings.