#Oscars2022: All The Outstanding Winners At The 94th Academy Awards 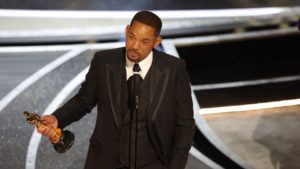 The 94th Annual Academy Awards aired last night live from the Dolby Theater in Hollywood, highlighting the achievements of stars of the Broadway stage and the producers, directors, and managers that make it all possible.

The biggest winner of the night was “Dune,” an American epic science fiction film directed by Denis Villeneuve that tells the story of Paul Atreides, a brilliant and gifted young man born into a great destiny beyond his understanding, who travels to the most dangerous planet in the universe to ensure the future of his family and his people. The film won six categories, including cinematography and production design.

Will Smith won the best actor category for his role in “King Richard“. Jessica Chastain won for best actress for her role in “The Eyes of Tammy Faye“. Ariana DeBose received the best-supporting actress award for her outstanding role in “West Side Story“, while Troy Kotsur won best supporting actor in “CODA“, which made him the first deaf man to win an acting Oscar.

Check out what the stars wore to the award ceremony here.

Actor in a Leading Role

Actress in a Leading Role

Actor in a Supporting Role

Actress in a Supporting Role

Oscars 2022: Chris Rock is Not Filing a Report against Will Smith for Now – LAPD