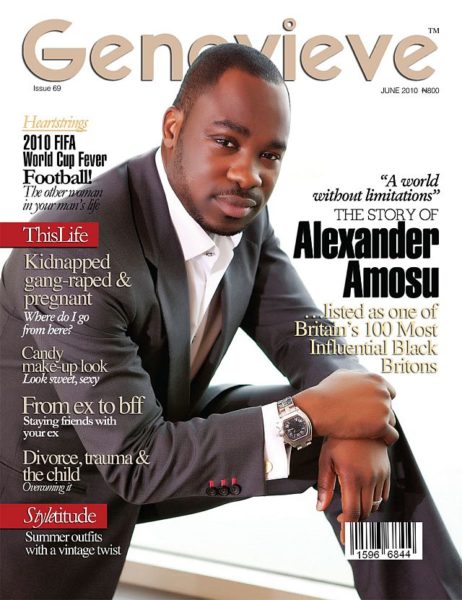 The June 2010 edition of Genevieve Magazine is different from previous issues in one very obvious way, there is a MAN on the cover!
Entrepreneur, Alexander Amosu graces the cover of the magazine. Mr. Amosu’s story is riveting to read! See an excerpt from his cover feature below.

Alexander Amosu is somewhat of a maverick; he is a man who does not know the word “Impossible” because it simply does not exist in his world! In his world there are neither limitations nor boundaries to cage his drive and dreams. Genevieve’s path crossed this young, restless, confident entrepreneur’s during the launch of his couture brand in Lagos, last year. Who is this guy we wondered? Why is very little known of him in his home country even with such an impressive profile sheet? Back at the office, the G- team flew a kite about making him the first man to grace the prestigious Genevieve cover; and guess what! It was a YES from everyone. After all, Amosu is a man of many firsts and very befitting to grace our cover in its 7th year…

We certainly think that Alexander’s story is worth telling and sharing with the Genevieve community, especially as our community has expanded over the years to accommodate the men folk. Besides, a success story has no gender lineage or bias as it benefits everyone who aims for the top. Alexander Amosu’s very inspiring story is therefore guaranteed to awaken you from slumber, leaving you wondering: who’s this guy with equal dose of swagger and humility? For his confidence, can-do spirit and exceptional achievements, many have actually dubbed him “King of the Swagger;” and this guy indeed has got the swagger, which is why he would pick up the phone and say with so much aplomb: “My name is Alexander Amosu… I make suits for the rich and famous….”

It certainly takes only an Amosu to wake up one day and decide that his next target was to make the most expensive suit in the world and earn a place for himself in the Guinness Book of World Records! It takes only an Amosu to wake up in his early teens and literally decide even in the face of very daunting environmental challenges that his place was going to be among the world’s topflight entrepreneurs, spewing businesses and creating wealth with so much ease! At the adolescent age of 12, Amosu started his first business, doing paper rounds and earning 10 pounds per week; at 15, he was already holding school football, basketball and table tennis tournaments, and managing nightclubs; literally building a foundation for himself in business management. By the time he was 19, Amosu had started his cleaning company, Homecare Agency funded by the renown Prince’s Trust (courtesy his impeccable Business Plan entry), raking in four thousand pounds per month and on the look out for his next business conquest. It wasn’t therefore a surprise to his close watchers when at 25 he made his first million in Pound Sterling by selling off his cleaning company and creating urban ring-tones for commercial purposes.