Intimacy like Never Before! Make Time in the Bedroom Better than Ever with One Easy Step 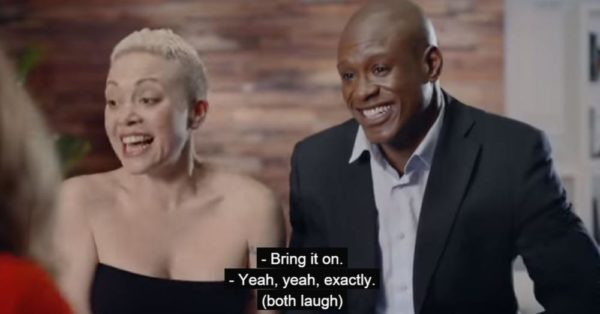 Millions of people have seen the way to a better love life, but few have figured out how to use it. Durex is offering you a unique opportunity to be one of those few.

Discover a new piece of technology that can not only ensure you have a better love life, but that is free and universal. You’ll thank us for it.

Watched it? Now you know! – It’s the OFF button.

The world’s leading sexual wellbeing brand sparked mass speculation on March 3rd by teasing an imminent technological breakthrough in partnership with Siren Mobile to improve people’s sex lives around the world. Hundreds of thousands of people visited the ‘Durexlabs’ website to find out more, with excitement amplified by global media and social networks.

But in a moving and enlightening video released this week, couples who volunteered to test the technology, eager to give their love lives an uplift, were surprised to learn the answer lay in a simple switch that had been right in front of them all along – the off button.

Here are some of the quotes from the interviewees, commenting on how technology diminishes their sex life,

“I may want sex and he might not be aware of that, because he’s distracted on his phone.”

“In the last few months, I’ve tried to have a ban on her using her phone in the bedroom … We’re now trying to use the bedroom for just sleeping and sex.”

“I’ve not delayed sex, I’ve faked an orgasm to speed it up to get back to work.”

The video, which received 765,025 views in its first 24 hours, follows some of these beta testers on their emotional journey, highlighting the serious issue that we are becoming enslaved to technology. It has been released alongside a study by Durham University commissioned by Durex, which reveals that pervasive use of technology in relationships is seriously impacting how often we have sex, even cutting intercourse short and causing tensions in relationships.

Researchers from Durham’s Centre for Sex, Gender and Sexualities revealed that a whopping 40% of those interviewed have delayed sex because of technology, largely smart phones and tablets, with others reported hurrying sexual activity in order to respond to messages. Moreover, a third of the couples interviewed admitted to interrupting sex to answer their phone. One participant said:

“Sometimes I’ll be on Facebook and he’ll be on a sporting app while we are both in bed; we realize that we are literally sitting in bed together, but living in different worlds.”

“With technology playing such a pivotal role in our personal lives and relationships, we set out to explore how it could be utilised in a positive way to enhance our sex lives, but in doing so we discovered the most effective answer was the simplest. After consulting countless experts, academic research and endless qualitative interviews, the solution turned out to be a simple one – we should disconnect to reconnect.“

“We are encouraged by the response to the campaign and film, particularly as we approach Earth Hour. We hope it will go some way to reconnect couples that have let technology compromise their connection with each other.”

Susie Lee, the app entrepreneur and CEO of Siren Mobile, has been a central part of the project’s implementation. Lee said:

“Of course, tech can never really replace human interaction. True chemistry comes from intimacy. “So whilst we need our tech – it has enhanced our lives, enabling us to reconnect with old friends, reach wider social groups and meet new people – we need to recognize the times and places when social networking doesn’t enrich our experience. We really need to learn to focus on each other in the bedroom, rather than on our smartphones or tablets.“

Dr. Mark McCormack, Co-Director of the Centre for Sex, Gender and Sexualities at Durham University, comments:

“Technology has revolutionised our lives and smart phones are now central to the organisation of romantic relationships, from establishing them to maintaining love and affection when couples are apart.”

“What this research reveals and the point the video makes is that technology now consumes our relationships at a much deeper level. It’s made its way into the bedroom in more ways than we imagined, often with benefits, but also coming with potentially serious costs to relationships, as it can cause frustration and tension, and encroach on sexual activity.“

The research, conducted by Durex in association with Durham University, can be found here: http://dro.dur.ac.uk/14770/

Key Stats From The Qualitative Interviews

About the Research
In-depth interviews were undertaken in February 2015 with 30 people from across England. Participants were aged 18-55, and were required to have been in a relationship for at least one year. All participants were heterosexual, and there were a diverse make up in terms of class, ethnicity, age and educational background. Ethical approval was gained from Durham University, and the full report can be found at Durham Research Online.

About Durex
Durex® is the #1 sexual wellbeing brand worldwide. The brand not only produces condoms which exceeds global testing standards, but also offers pleasure gels, lubricants and personal massagers. With over 80 years of experience in the bedroom, Durex is dedicated to inspiring lovers to love sex safely. That is why Durex will never stop innovating with new products that enhance the sexual experience, helping couples get closer and go further together.

For more information, go to www.Durex.com

Are You a Foodie? Get Cooking Tips, Recipes & More on Knorr.ng!