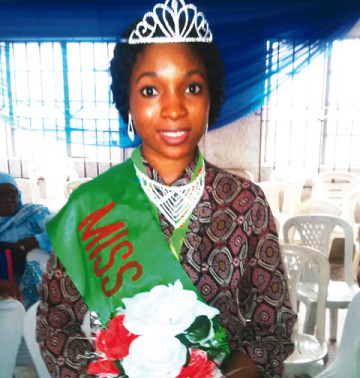 Did you know there was a beauty pageant for virgins? Well, now you know.

Punch reports that she beat 51 other “self-confessed virgins” at the event held on Saturday in Surulere.

Speaking on preserving her virginity, Oladipo said: “It’s all about self-determination. It is about knowing what you want to achieve. It is a thing of honour to be a virgin.”

The organizer of the pageant, Princess Adunni Adediran, said contestants were not medically or physically tested and that judges considered the candidates’ appearances and I.Q.

“I was thinking of our female children who men repeatedly use to satisfy their carnal desires before they are finally dumped. These girls will have undergone several abortions till their wombs are damaged. And when they marry they cannot have children. Some girls even run mad.”

Some of the 52 contestants were mobilised by a Muslim cleric, Alfa Sharafadeen Bulala.

When he saw our handbills, he was excited at the prospects and invited virgins in his mosque and the surrounding neighbourhood.

When we started, we had a veteran gynaecologist helping us – Naimdeem Adeikemade. But some parents were grumbling that we were violating the privacy of their children by inspecting their privates. The ministry of health also wrote me a letter in 2009 on the same issue.

This time around, God forbid that anyone who is not a virgin would come here to contest. I’m not testing them but they don’t know.”

According to reports, officials at the event addressed the girls on health, social and other related issues.

UN Says There are Over 1.5 Million Internally Displaced Persons in Nigeria