Did you watch Day 54 of the Big Brother Reality TV show?

Bisola and ThinTallTony were playing outside while picking up garbage this morning. Bisola jumped onto his back and he mistakenly passed air. Of course, Bisola reacted saying, “You’re disgusting!” 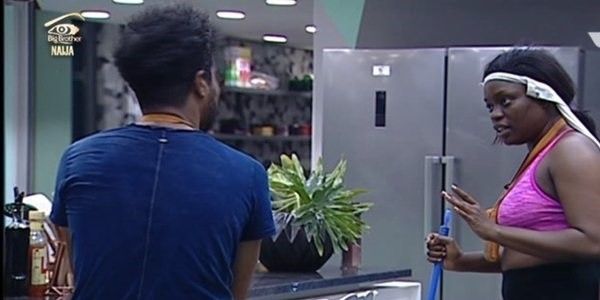 ThinTallTony responded mocking Bisola about her weight, connecting that to bad habits. “You’re disgusting. Look how big you are!”

For a moment there, that seemed to hit a nerve, as Bisola asked Efe, Bally, Marvis and TBoss, who had been busy with their daily chores if it was acceptable for a man to talk about a woman’s weight in the manner in which ThinTallTony had referred to hers.

All this while, Marvis and Efe giggled and made silly comments. This seemed to bring the funny side of the situation, as ThinTallTony and Bisola joined in giggling briefly before carrying on with their ‘argument’. Bally was also roped in as Bisola’s “potential boyfriend” and they all started joking around the apparent love triangle between ThinTallTony, Bisola and Bally.

While the other Housemates dozed the afternoon off, Bassey and Debie-Rise bonded over a few musical notes. The duo sat at the kitchen table and went over the basic musical notes – Do-Re-Mi – using the guitar. Debie-Rise taught Bassey how to play the guitar, using the basic understanding of the notes. “Do-Fa-So are major codes,” she explained to him. 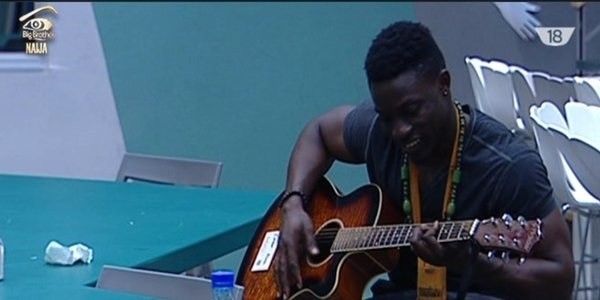 She played a few notes on her guitar thereafter, before giving him a chance. He seemed to struggle there a bit but Debie-Rise came to his rescue, giving him tips. “Use two fingers when you want to play the ‘Do’ note,” she advised.

Meanwhile, ThinTallTony, Marvis and Efe were fast asleep in the lounge. Marvis woke up a bit later and joined the two in the kitchen. All the others joined in one by one after waking up. 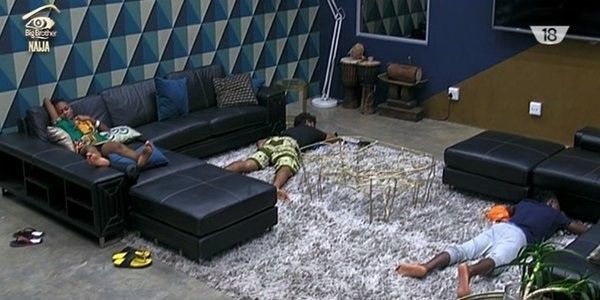 By the time the ‘lesson’’ was over, Bassey complained of a sore wrist. “I will master it. I understand the basics now,” he added. Clearly, Debie-Rise enjoyed every moment of the ‘lesson’.

As the Housemates entered into the Arena and got geared up, Big Brother’s ominous voice boomed over the PA system to explain the rules of engagement to them. Biggie took his time to explain all the requirements of the six different stages to them.

With the rules carefully explained, Biggie called TBoss to the starting line to kick off this evening’s Arena games. TBoss seemed to be all kinds of ready as she blitzed through all the stages of the obstacle course to set a blistering time of 1:44 seconds. A great way to set off the proceedings and an outstanding time to beat.

Up next was ThinTallTony, and determined not to be outdone by anybody, he stumbled a bit at the first stage but used his long limbs to make up time as he finished the entire course with a record time of 1:43 seconds. He beat TBoss’ time by one second and moved up the leader board to first place. 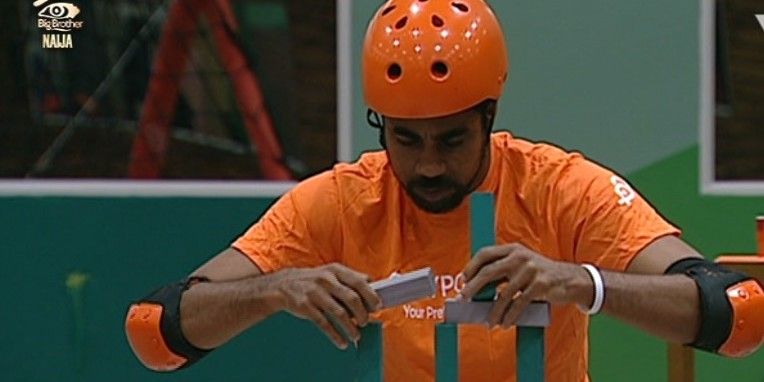 Debie-Rise was third to the starting line and she faltered at the first stage where she lingered for over two minutes. Finally overcoming stage one, she tried her best to make up the lost time but alas, she couldn’t complete the course and got buzzed out. 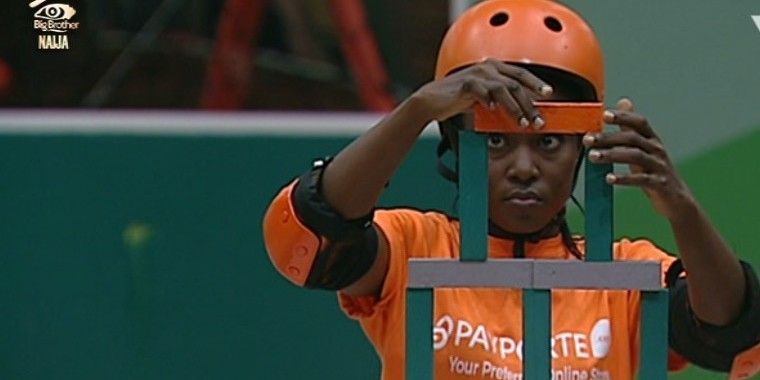 Bassey stepped up to the starting line buoyed by the fact that he had two wins in the Arena under his belt. Biggie’s obstacle course appears to be a giant killer as he faltered at various stages, getting stuck at the last stage for a while, finally completing the course with a time of 2:41 seconds. 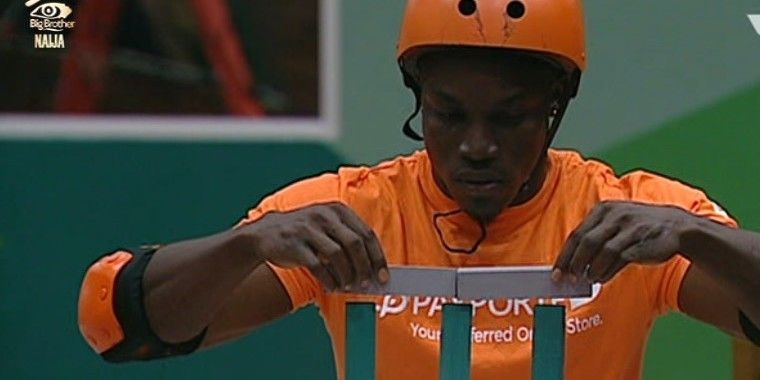 Marvis was up next and she wasted no time hitting Biggie’s obstacle course. She tried her best at tackling all the individual stages setting a good pace, but alas, a slight stumble at the final stage saw her finishing the course at a time of 1:51 seconds; putting her in third place on the leader board.

Bally sauntered to the starting line and got stuck in at the sound of the buzzer. Going through the stages at his own pace, he worked his way to the final obstacle where he attempted to flick ping pong balls into a bowl of water across the Arena. He finally landed a ball into the bowl and clocked in at 2:09 seconds placing him in fourth place.

Bisola stepped up next and wasted no time in getting stuck in. She faltered at the first obstacle which has officially become the biggest killer of the night. She finally got past the first obstacle and proceeded to attempt the other stages of the obstacle course, but half-way through her time lapsed and she got buzzed out too. She joined Debie-Rise at the bottom of the leader board as the disqualified Housemates. 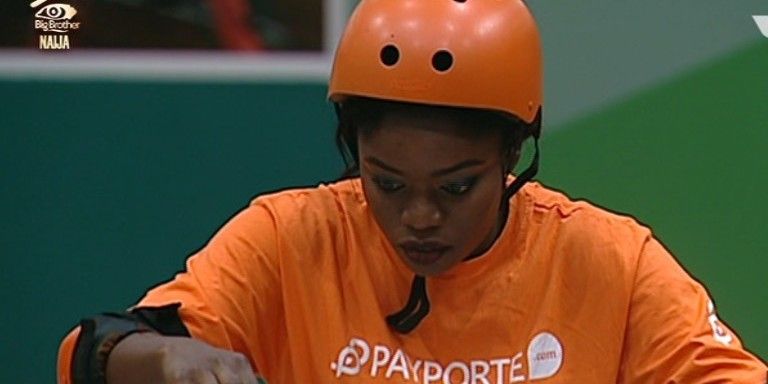 Efe, the last but not the least stepped to the starting line and as soon as the buzzer sounded, he attacked the first stage. Breezing through the different stages, he got to the final stage looking like he was going to shatter all the times posted earlier, but alas, he stumbled at the final obstacle on the course and finally finished at a time of 2:32 seconds. 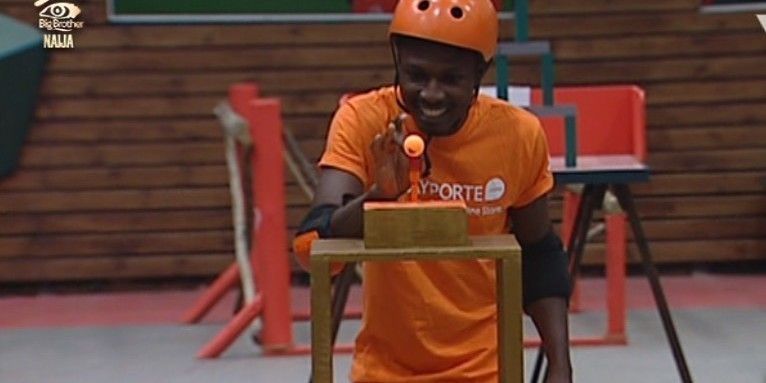 With all the Housemates having gone through the course, Biggie gave accolades to the deserving Housemates praising TBoss for being the best performing female on the night but sadly there can only be one winner; and with a time of 1:43 seconds, ThinTallTony was announced as the winner of a luxury treat from Biggie. 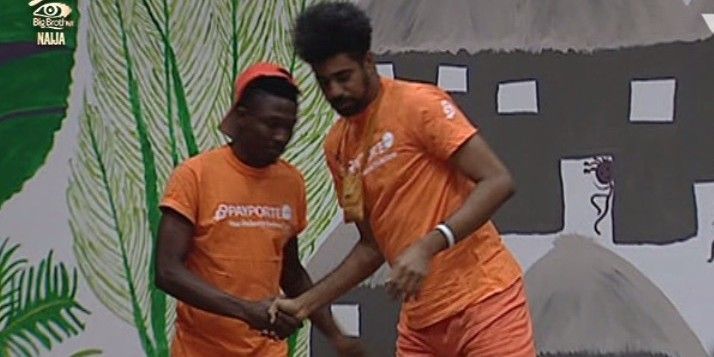 Biggie asked the winner TTT to pick a Housemate to share in this luxury treat and he wasted no time in choosing Efe.