"I've been looking forward to this moment for weeks," - Marc Bartra tweets as he returns to Training following Borussia Dortmund Bomb Attack 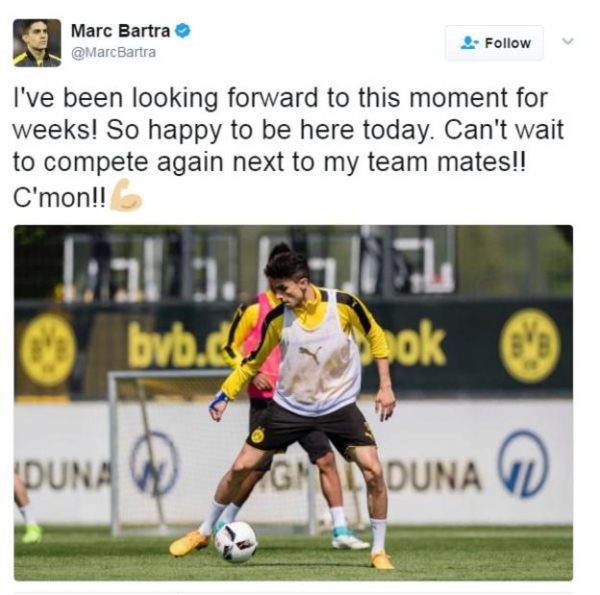 Borussia Dortmund defender Marc Bartra has returned to full training, a month after being injured in a bomb attack on the German club’s team bus, he announced through his Twitter account.

The 26-year-old Spain international had surgery on his right hand and wrist following the blast, which happened ahead of a UEFA Champions League quarter-final tie against Monaco on 11 April.

He wore a cast on his right arm and posed for a selfie with his team-mates as he made his training-ground return on Wednesday.

“I’ve been looking forward to this moment for weeks,” Bartra tweeted.

Bartra, who joined Dortmund from Spanish champions Barcelona last June, was the only player to receive serious injuries in the blast.

Dortmund, who are third in the Bundesliga table, have two more league games to play this season, while they meet Eintracht Frankfurt in the German Cup final on 27 May.

#RIPKarabo: So Sad! This Domestic Violence Victim was reported Missing but Later Found Murdered and Burned by her Ex-Boyfriend