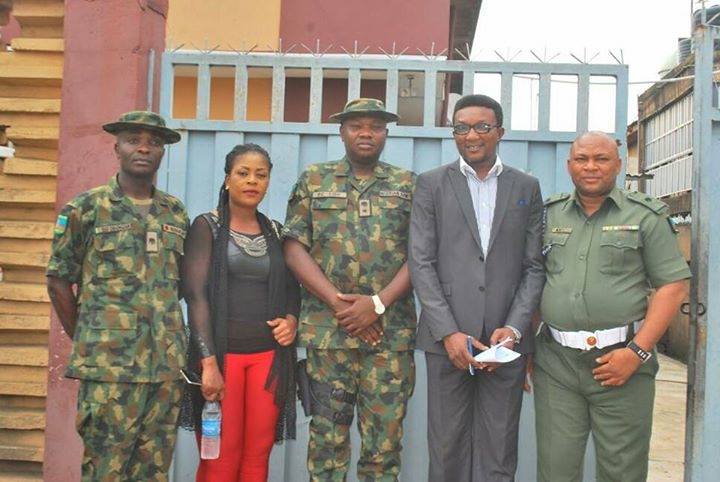 The Nigerian Army has decided to settle out of court its case with Ruth Orji who was brutalized in the Ikorodu area of Lagos State in March earlier this year.

A Non-Governmental Organization Joint Legal Action Aids (JLAA) had sued the Nigerian Army on her behalf for N250m after photos of her made the rounds on social media.

The Nigerian Army had earlier in March detained the soldiers who assaulted the woman and set up a board of inquiry to investigate the assault.

The JLAA today released a statement saying they had met with the Army outside of court, and after the army tendered an apology, offers and counter offers were made.

Although a settlement has not been agreed on, the body is positive an agreement will soon be agreed.

After some legal skirmishes in the courtroom, the Nigeria Army finally signaled their intentions to amicably resolve the lingering court case filed against them by JLAA for and on behalf of JLAA member Ruth Orji.

Ruth Orji was brutally attacked and dehumanized by soldiers attached to 174 Battalion, Ikorodu sometimes in March this year.

Images of her, showing the injuries she sustained have gone viral on the social media, sparking outrage.

JLAA filed a legal process at the Federal High Court against the Nigerian Army and her assailants to assert her right and demand for N250M compensation.

The Army had immediately enlisted the services of a Senior Advocate of Nigeria (SAN). to defend them.

The matter lingered and there were few legal skirmishes. A few days ago, the General Counsel of JLAA was contacted by the Army High Command for settlement.

The Army called a meeting in 9 Brigade Headquarters at Ikeja. JLAA turned down the venue and instead insisted that the meeting must hold in its office at Akowonjo, Lagos.

The Army agreed. In attendance on behalf of the Army were the Commanding Officer, 714 Battalion, Ikorodu, Lt.Col. B.C. Ezeh, Army Legal Director, Major C. Biambo, Major S.U. Obongha and host of other officers in a convoy of three military trucks.

The meeting in was held in JLAA conference room. Kingsley Ughe, Opeyemi Baderu, Ruth Orji Orji were there for JLAA.

The Army apologized for the conduct of Major S.U.Obongha for the brutal assault on JLAA member, Ruth Orji. Major S.U. Obongha himself tendered an unreserved apology to the JLAA member.

After the formality of apologies, the meeting entered into the very delicate terrain of monetary compensation. JLAA’s position was eloquently presented to the visiting team by the General Counsel.

There were offers and counter offers. Both sides stuck to their position. At the end, the meeting was adjourned to today for both sides to evaluate the settlement proposals on the table…

The military men were most professional and gentlemanly. It was a fine moment for JLAA and the military as the hunter meets the hunted.

We are optimistic that a settlement could be reached after all.

We have a similar action already against the Nigerian Army in the case of Ebere Sandra Ohakwe, the actress brutalized and dehumanized by soldiers in Port Harcourt.

JLAA has expressed the hope that beyond getting justice for the victims of military brutality, the cases would help check the rising cases of degradation of civilians.

The Army command has assured JLAA that it has set up a Human Rights Department at the headquarters of 81 division of the Army to look into cases such as that of Ebere Ohakwe (Jewel Infinity) and Ruth Orji.

JLAA will collaborate with the Army authorities to ensure that cases such as these do not occur again.

JLAA is using the Ruth Orji’s case and that of Ebere Ohakwe to send a message to lawless elements within the military that the days of impunity and degradations of the Nigerian people is over.

For the ongoing case in Port Harcourt against the Army, we would like to assure all members of JLAA that, though the mills of God grind slowly, yet they grind exceeding small and steadily.