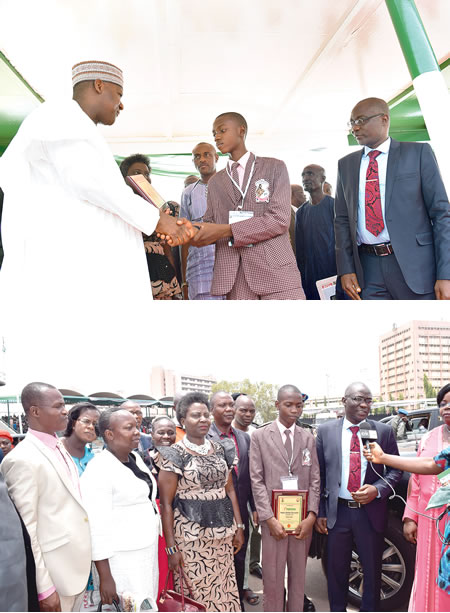 Adedipe Oluwatosin, a 16-year-old student of Shepherd International School, Ado-Ekiti, has won the Young Nigerian Scientist Presidential Award. The competition was organised by the Federal Ministry of Science and Technology and had 774 contestants from all local government areas in the country.

In recognition of his work, the Ekiti State Government has rewarded him with a cash prize of N2.5m and a yearly grant of N1m which will run for 4 years.

He was presented with the award by Speaker of the House of Representatives Yakubu Dogara.

Oluwatosin, who also won the 2016 Science Teachers Association of Nigeria (STAN) National Science Competition, expressed his desire to become a doctor and save lives in an interview with Naza Okoli of the Nigerian Tribune.

Young Scientist of the Year – it sounds like a big title. How did all start?

What would you say were the skills that helped you excel?

Who has been the greatest influence in your life?

My parents have been the greatest influence in my life. They have been so supportive, and they helped me to become who I am today by their words of encouragement, prayer and love.

What do you want to be in future?

I want to be a doctor; I want to save lives.

Many believe that the field of science and technology hasn’t been given the kind of attention it deserves.

In your experience, what would you say is the secret to success?

I think the secrets to success are hard work, determination, vision, and so on. But the greatest secret is God, because with God, all things are possible.

What other things do you do, apart reading science?

I love to play video games like football, racing, and others. I also love playing Chess and Scrabble.

UPDATE: Thank You All for Participating! Here are our Winners for the BellaNaija & Spotlight FREE Photoshoot Giveaway