Comments on kneeling had nothing to do with race - Trump, as Celebrities join Athletes in Taking a Knee

US President Donald Trump has tweeted that his issue with football players kneeling during the American anthem has nothing to do with race.

Trump had, to a crowd of supporters on Friday, asked that players who took a knee during the anthem be fired.

Wouldn’t you love to see one of these NFL owners, when somebody disrespects our flag, to say, ‘Get that son of a b**** off the field right now… he is fired’?

His comment was seen as directed toward Colin Kaepernick who in protest of the shootings of unarmed black men in America would take a knee during the national anthem.

Over the past weekend, NFL players and coaches and even owners had in solidarity protested the president’s comments.

Some took a knee, others crossed arms, while some totally removed themselves from the conversation by remaining in the locker room while the national anthem played.

Celebrities also joined the cause, with Stevie Wonder, John Legend, Pharrell Williams, Cardi B, Tracee Ellis Ross, and Ice Cube all taking a knee while performing over the weekend.

Trump has come forward to say that his comments were not race related, but is about the respect of the country.

The issue of kneeling has nothing to do with race. It is about respect for our Country, Flag and National Anthem. NFL must respect this!

See photos of people taking a knee below: 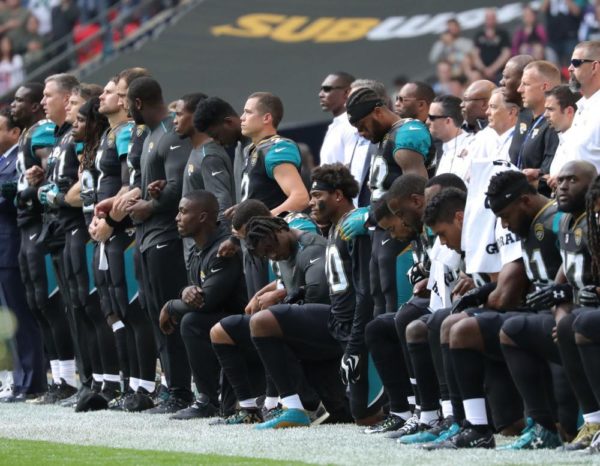 LONDON, ENGLAND – SEPTEMBER 24: Jacksonville Jaguars players kneel during the playing of the national anthem against the Baltimore Ravens at Wembley Stadium on September 24, 2017 in London, United Kingdom. (Photo by Mitchell Gunn/Getty Images) 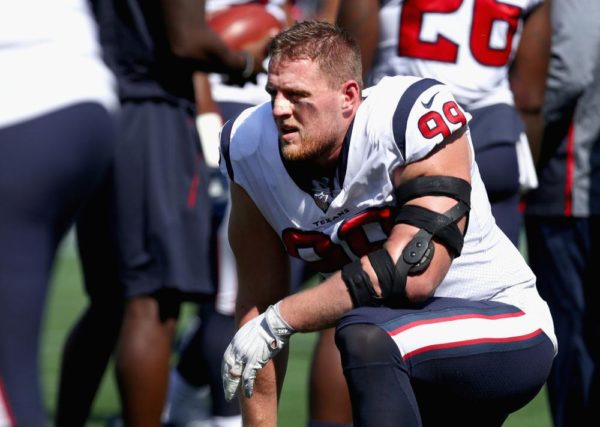 FOXBORO, MA – SEPTEMBER 24: J.J. Watt #99 of the Houston Texans kneels before a game against the New England Patriots at Gillette Stadium on September 24, 2017 in Foxboro, Massachusetts. (Photo by Maddie Meyer/Getty Images) 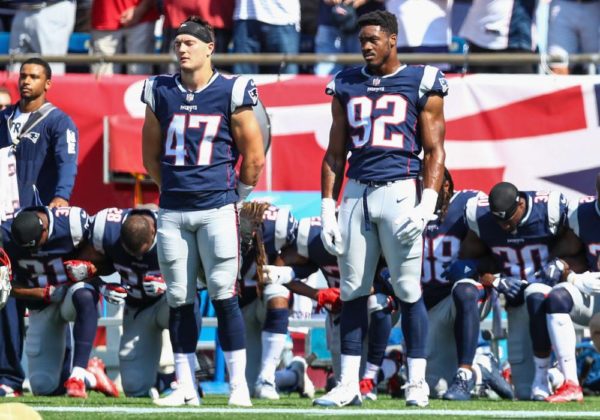 FOXBORO, MA – SEPTEMBER 24: Members of the New England Patriots kneel on the sidelines during the National Anthem before a game against the Houston Texans at Gillette Stadium on September 24, 2017 in Foxboro, Massachusetts. (Photo by Maddie Meyer/Getty Images)

DETROIT, MI – SEPTEMBER 24: Members of the Detroit Lions take a knee during the playing of the national anthem prior to the start of the game against the Atlanta Falcons at Ford Field on September 24, 2017 in Detroit, Michigan. (Photo by Rey Del Rio/Getty Images) 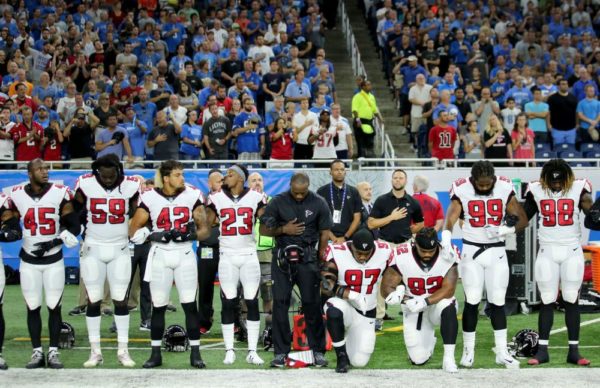 DETROIT, MI – SEPTEMBER 024: Members of the Atlanta Falcons football team Grady Jarrett and Dontari Poe take a knee during the playing of the national anthem prior to the start of the game against the Detroit Lions at Ford Field on September 24, 2017 in Detroit, Michigan. (Photo by Leon Halip/Getty Images) 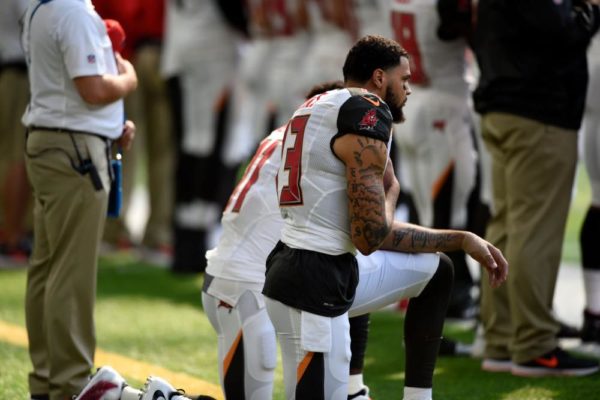 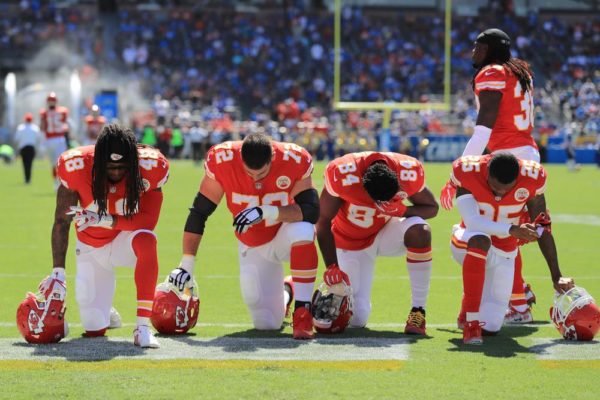 CARSON, CA – SEPTEMBER 24: Terrance Smith #48, Eric Fisher #72, Demetrius Harris #84, and Cameron Erving #75 of the Kansas City Chiefs is seen taking a knee before the game against the Los Angeles Chargers at the StubHub Center on September 24, 2017 in Carson, California. (Photo by Sean M. Haffey/Getty Images)

Rico Lavelle sang the anthem AND took a knee pic.twitter.com/mgno4HCzZQ