"When will the youths get a chance?" - I Go Dye tackles Atiku on Presidential Aspirations

Agnes Bada is the Voice Behind The Viral TikTok Remix of "Arcade," "Under The Influence" & Other Hit Songs 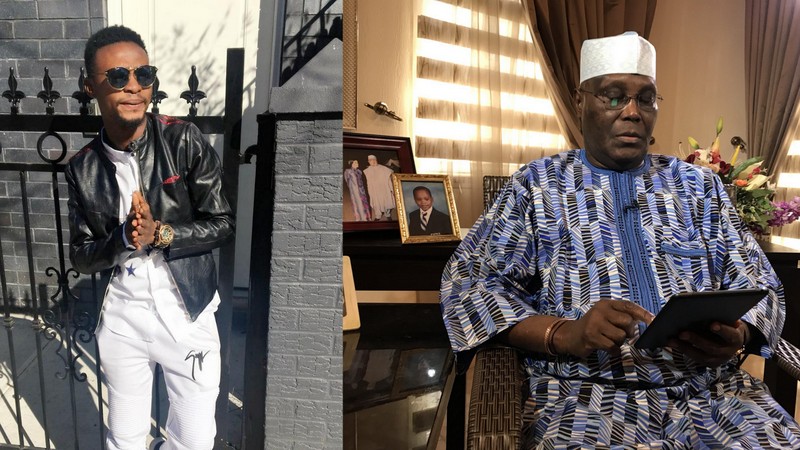 Just yesterday, former Vice President Atiku Abubakar declared that he had returned to his former party PDP. This came just days after the announcement of his exit from APC.

There have been insinuations since then that this move is all in a bid to further his presidential aspirations for the 2019 elections. Comedian I Go Dye is however of the opinion that the veteran politician should step down and let younger ones run the show.

In an open letter penned on his Instagram page, I Go Dye states that Atiku had his chance to change things when he was still Vice President. He wrote:

Don’t use sentimental empathy on the youths to express your political ambitions.
Sir, you are one of those that have immensely benefited from Nigeria since your birth in 1946.
Having worked for 20years with the Nigeria Customs where you retired at the age of 43 in 1989 as Deputy Director, your bucket list sure looks good because you were obviously employed at youth 23.
In 1999 you became governor of Adamawa and ultimately the Vice President, all of these you achieved at 53. What did you do during your time in that exalted position? When will the youths like in your time get a chance? am motivated to speak, based on your statement : A party that does not take the youths into account is a dying party.The future belong to young.Please which of the future?
Remarkably, between 1999 and 2007 that you were the Vice president of Nigeria, it is recorded that tertiary institutions witnessed several strikes that wasted seventeen months ,three weeks and three days.Within this period, what did you do?
If social support were given to youths then,their children will be between 18 and 20years during the 2019 elections,obviously they would have willingly voted for you or anyone that you endorse in 2019.This is the essence of making sacrifices for the future generation.
You cannot be credited to have been a philanthropic to the youths.
The recent revocation of the NPA contract with Intel,your company,is the major issue.
As a company either, the people in the region you operated cannot accredit Intel to have provided credible support for the youths or built skills acquisition centers to curb unproductivity as part of it’s cooperate social responsibility , which has resulted to many youths embarking on the sub- sahara deserts route treking to Europe,which has claimed many lives.
Your excellency,sir Atiku Abubakar, please don’t use sentimental empathy on the youths to express your political ambitions,because by 2019 the youths are preparing to substantiate the real economical,political and progressive change.
I kindly recommend that you should advocate for process that will afford us
the opportunity of a youthful leadership in the 2019 election.Thanks Amb Francis