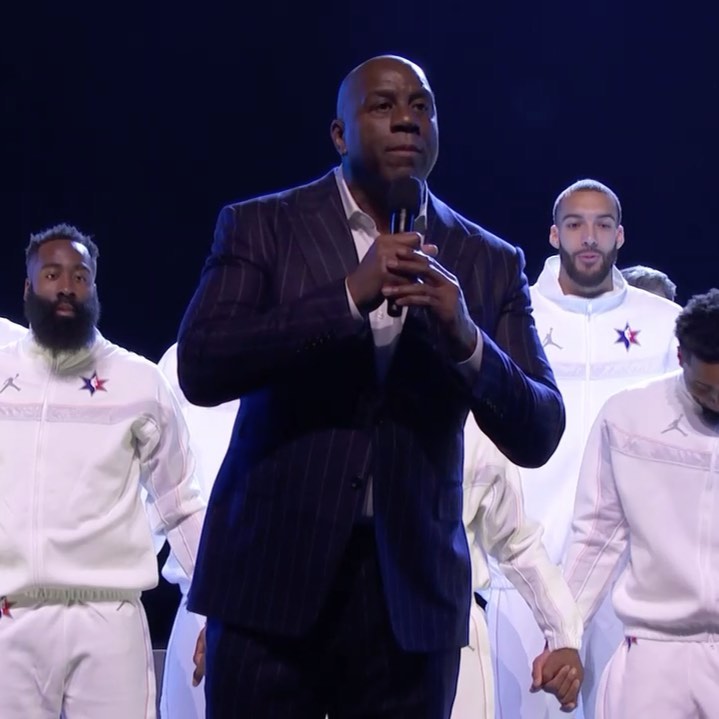 There is no doubt that Kobe Bryant‘s legacy was felt throughout the 2020 NBA All-Star Game.

The Los Angeles Lakers legend, who tragically died alongside his 13-year-old daughter, Gianna Bryant, and seven others in a helicopter crash, was honoured during Sunday’s game.

1. The event, which was held at the United Center in Chicago, Illinois, kicked off with a touching tribute to Kobe Bryant by Jennifer Hudson. The singer singer delivered a stunning rendition of “For All We Know,” as photos of Kobe Bryant was displayed behind her, including photos of Gigi.

2. Before Hudson’s touching performance, Magic Johnson kicked things off with a few words about Kobe and the late NBA commissioner David Stern, who died on Jan. 1.

“We’ll never see another basketball player quite like Kobe, scoring 81 points in one game, scoring 60 points in his last game, and then, winning five NBA championships. But what I’m really proud about when we think about Kobe Bryant… he was passionate about being a great father, husband, filmmaker young man won an Oscar so we all are hurting.”

3. Common came out to perform as well, and before introducing the players, he also honored Bryant, as well as the city of Chicago, where the game is taking place.

4. During the game’s big halftime show, Chance the Rapper performed a number of his big hits during which he was joined by Quavo and DJ Khaled for a high-energy appearance that got the crowd energized. However, he closed the halftime show out with one of the most emotional tributes of the night.

5. NBA Commissioner Adam Silver revealed on Saturday that the Kia NBA All-Star Game MVP Award would be renamed in honor of Kobe Bryant, who was an 18-time All-Star and won four All-Star Game MVP awards during his career. The award was presented for the first time with its new name to Kawhi Leonard, who lead Team LeBron to victory.