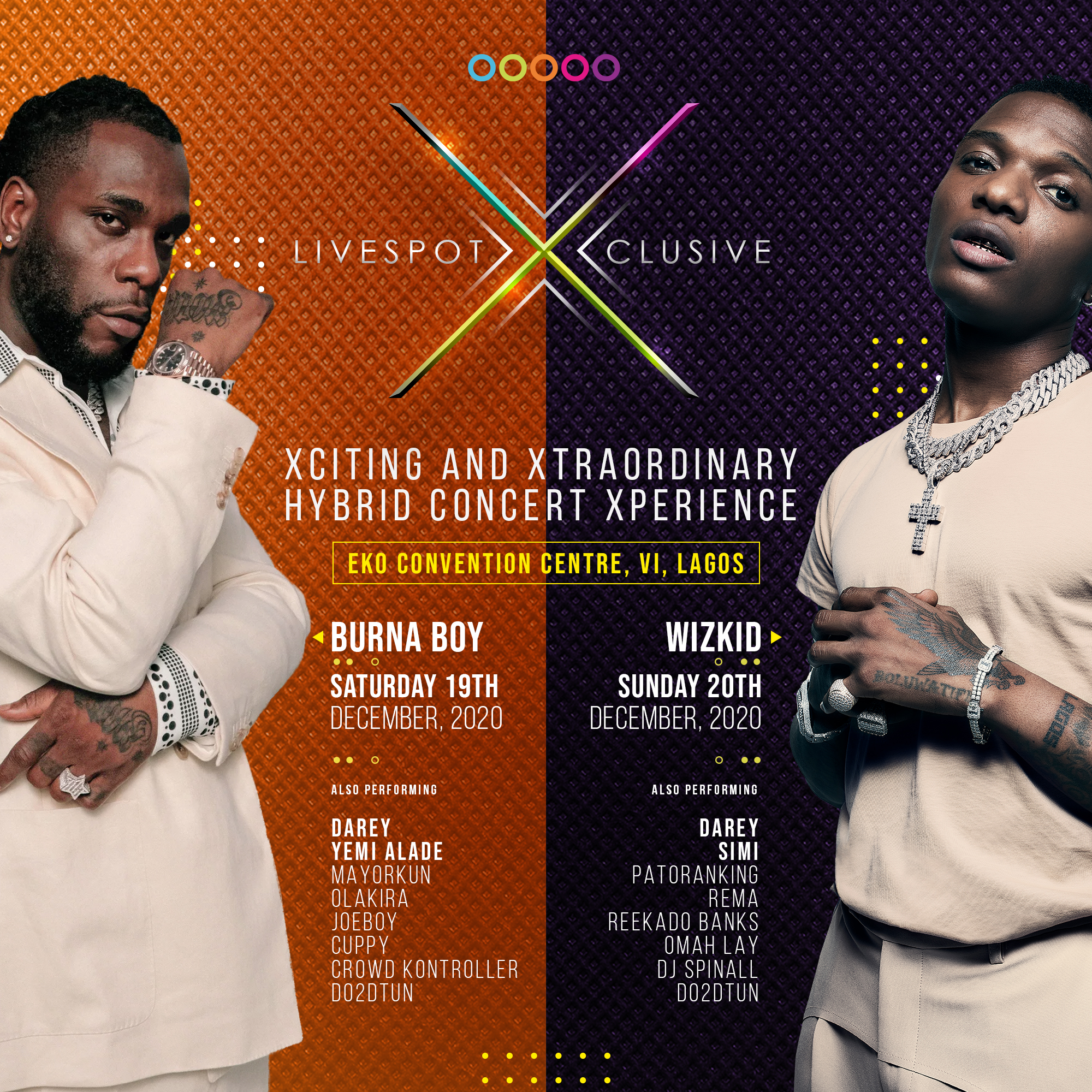 The biggest names in the Nigerian music industry like Burna Boy, Patoranking, Yemi Alade, Wizkid, Simi, DJ Cuppy, Rema, Joeboy, DJ Spinall amongst others, will be at the 2020 second edition of the Livespot 360 star-studded concert on December 19 and 20, 2020, at Eko Convention Centre, Victoria Island, Lagos.

There will also be a virtual edition on Livespot Nation.

Livespot360 revealed that Livespot X-Clusive was borne out of a desire to celebrate the best of Nigerian music and stage an exciting end to a very tough year. In true fashion, Livespot360 has acquired the buy-in of two of Nigeria’s biggest artists, Burna Boy and Wizkid, who will headline the concerts. Also billed to perform are established artists such as Simi, Yemi Alade, and Darey.

Instead of the usually crowded concerts that Lagos is known for, the two-day event will be very exclusive with limited seating in line with COVID-19 restrictions. Fans and interested parties unable to secure tickets to the physical concert will still be able to watch the show via live stream accessible on Livespot Nation.

According to CEO, Livespot360, Deola Art Alade, Livespot X-Clusive is the entertainment industry’s answer to a most-difficult year, marred by developments that have had striking effects on Nigerians:

“Nothing gets Nigerians more excited than good music and larger-than-life acts. After over ten challenging months for everyone, we want to deliver on an experience Nigerians will remember fondly for months to come. Livespot x-Clusive will be unlike anything you’ve experienced before. From the headline acts, to the performances, ambience, among other attractions, the experience is set to be an all-timer. ”

Livespot X-Clusive is a brainchild of Livespot360, a creative collective of the digital era, unified by a passion for developing disruptive ideas. Combining digital marketing, experiential marketing, advertising, education and entertainment for the Nigerian audience, Livespot constantly pushes the quality and performance bar higher.

It’s Just a Few Days to Fuji: A Opera | Get all the Details on What to Expect