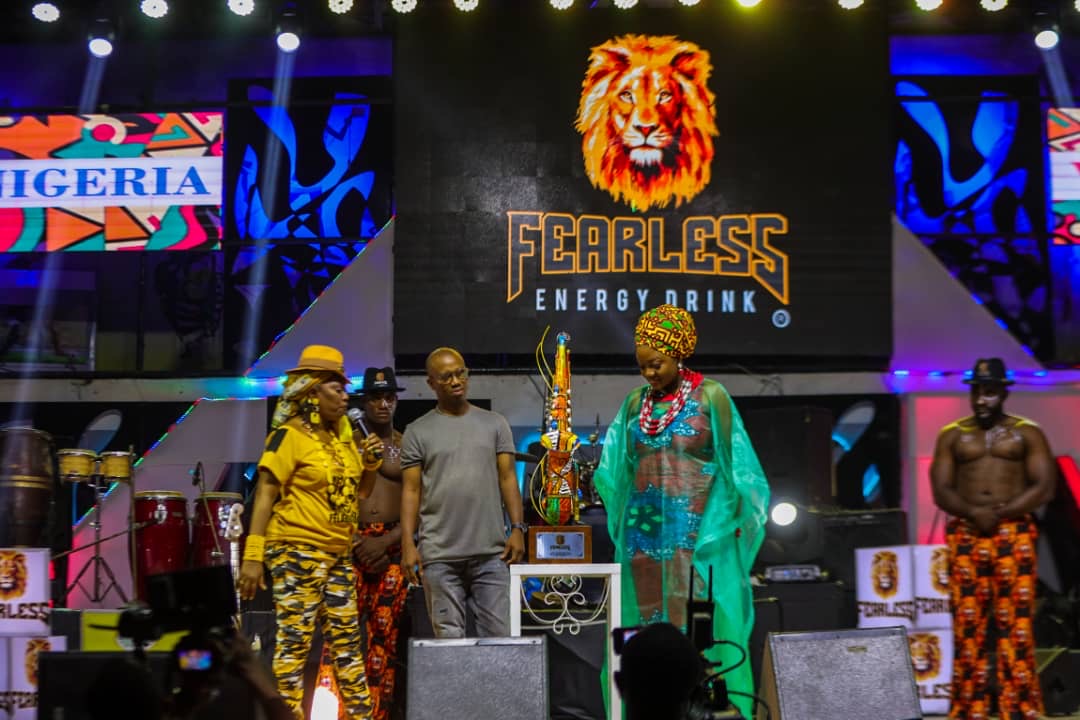 From Right: Brand Manager, Rite foods, Boluwatife Adedugbe, at the presentation of Fearless posthumous Award, by Fearless Energy drink, from the stable of Rite foods to the late Afrobeat King, Fela Anikulapo-Kuti popularly called Abami Eda; with Fela eldest daughter Yeni Anikulapo-Kuti and her younger brother Kunle Anikulapo-Kuti, during the grand finale of the 2021 edition of Felabration at the famous African shrine Agidingbi Ikeja, Lagos.

Fearless energy drink, from the stables of Rite Foods, has taken brand marketing to an enviable height with the sponsorship of this year’s Felabration, commemorating the Late Afrobeat King, Fela Anikulapo-Kuti, who was presented a posthumous award, as Africa’s foremost talent with positive energy, a creative genius, intentionally different and a premium quality brand that resonates the value chain of the Fearless energy brand.

The Fela’s posthumous award is hinged on the story conceptualized by the Fearless energy drink brand, from its recent findings on courageous people in all spheres, including music where the late Afrobeat King was pinpointed as Africa’s Most Fearless man, in ideas, performance, courage and leadership.

Looking so magnificent and admirable, the posthumous award forms part of this year’s week-long Felabration event held from October 11-17, 2021, with the theme “Viva Nigeria Viva Africa.” 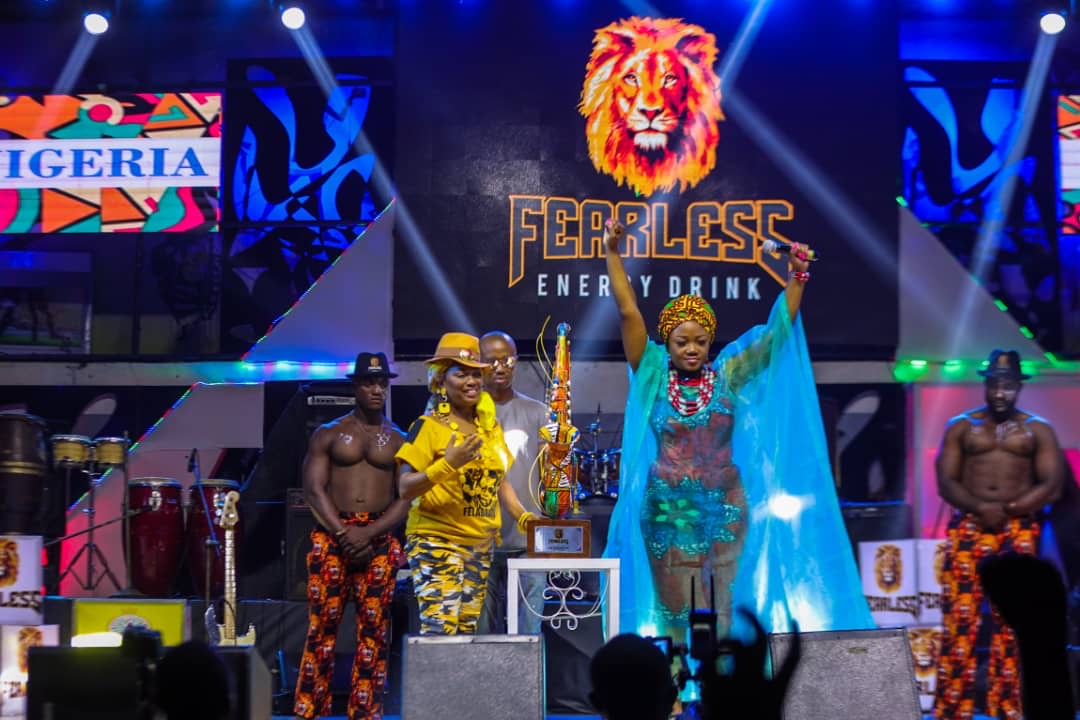 The significance of the award is connected to the market leadership of Fearless energy drink, which is the current market leader in the energy drink sector and the Afrobeat star, as both depict exceptionality in the sphere they represent. The positive energy of fearlessness, positivity, and can-do spirit of Fela Anikulapo-Kuti as a global icon and the world-class status of the Fearless brand and Rite Foods company, fits so effortlessly. 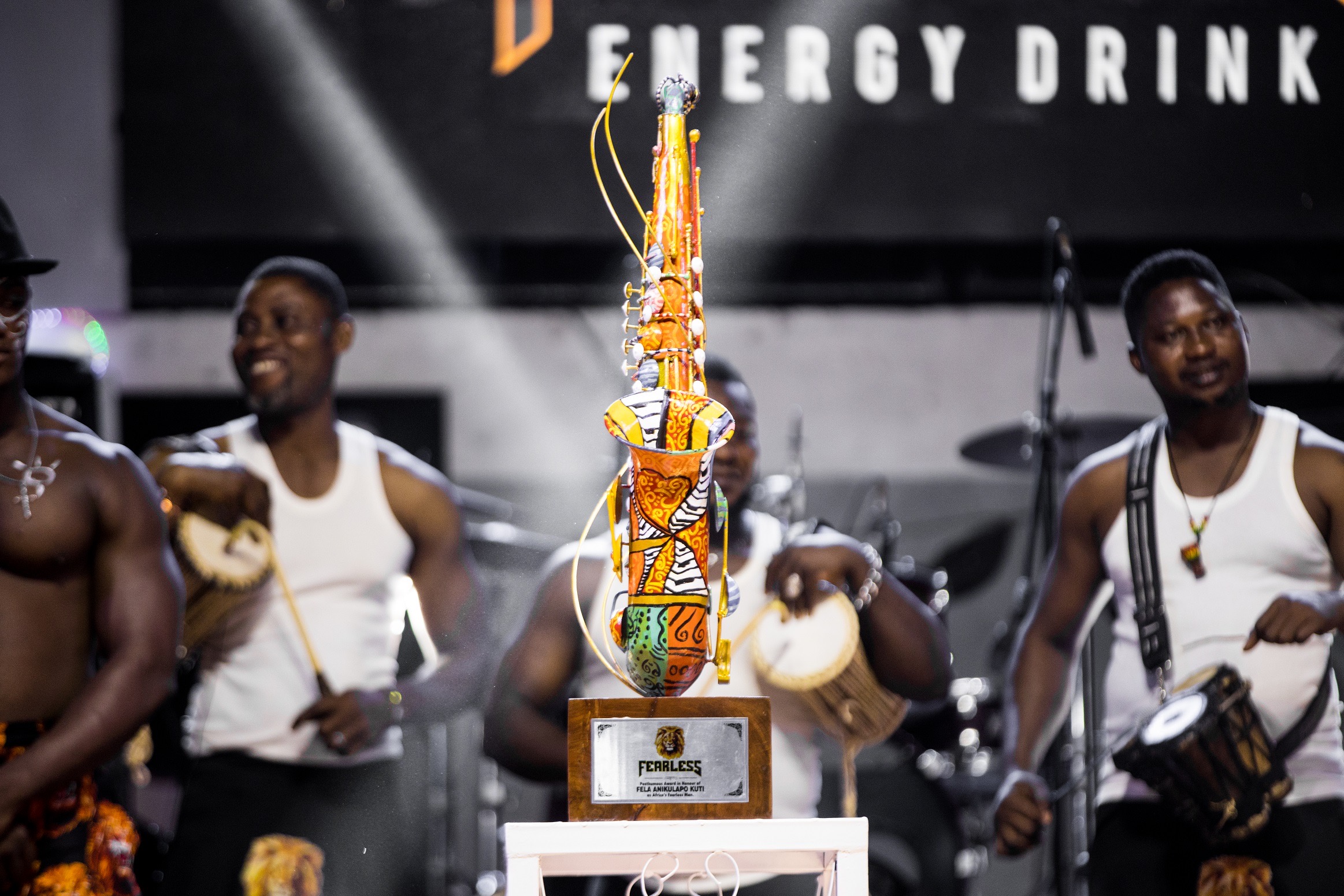 Photo shows the Fearless Posthumous Award (middle) surrounded by drummers during the grand finale of the 2021 edition of Felabration at the famous African shrine Agidingbi Ikeja, Lagos.

Relaying his past, Fela fearlessly composed songs like “Suffering and Smiling,” “Sorrow, “Tears and Blood,” and “Unknown Soldier” as a form of political resistance against oppressive and dictatorial rule. Also are songs against inhuman acts against Africans like “Colonial Mentality,” “Teacher Don’t Teach Me Nonsense,” ”Mr. Follow Follow”, among others.

Through his music, he created a cultural crossroad that other parts of the world could connect with, against tyranny, for a better society. 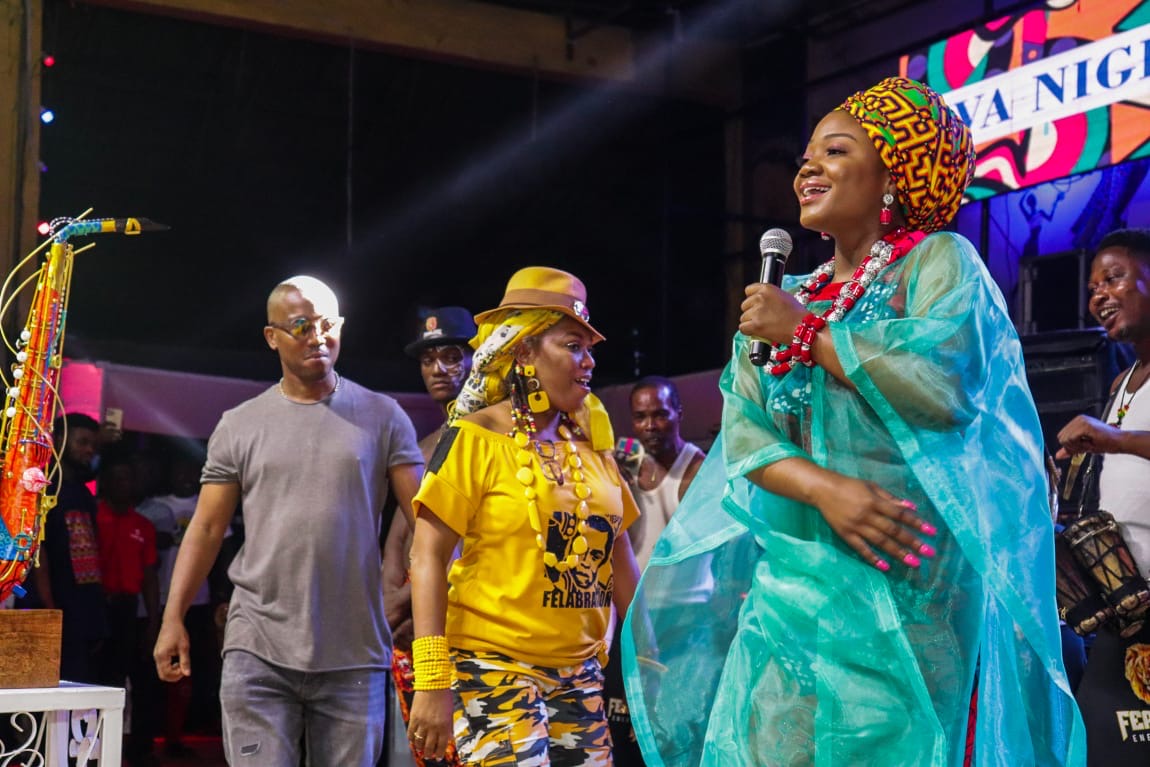 Speaking on the bespoke award, the Managing Director of Rite Foods, Seleem Adegunwa, posits that the Late Fela deserves honour for the impact he made in the music industry, having fought a good cause for the people through his songs.

He said Fela resonates with what Fearless stands for, positive energy, courage, leadership, and can-do spirit that comes with Fela’s creativity and leadership quality, his pursuit for a better Nigeria and Africa in general.

Presenting the award with a standing ovation and pouring applause to the Founder of Felabration, Yeni Anikulapo-Kuti, Fela’s eldest daughter and younger brother, Kunle Anikulapo-Kuti, Rite Foods Brand Manager, Boluwatife Adedugbe, said the Fearless posthumous award signifies the importance attached to the life and times of the Afrobeat megastar. 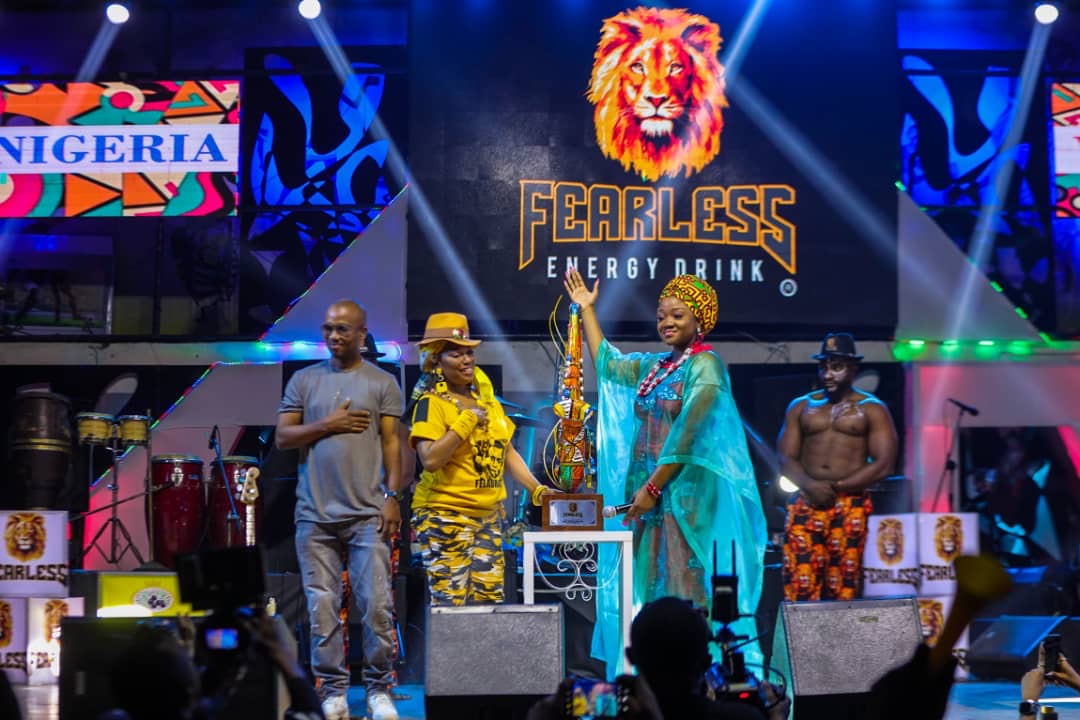 She affirmed that the outstanding performance by the music legend that made the nation and Africa could not be unrecognized; hence the noble recognition was awarded to him.

Adedugbe, who was immaculate in her outfit for the night, did the Fela salute as Fela, also known as “Abami Eda” will do, as a tribute to the courageous musician and activists, after pouring encomium on him, not only as a great Nigerian but an African of high repute.

Receiving the award, Yeni Anikulapo Kuti, who was amazed and thrilled with the attractive symbol that signified his father’s greatness in his sphere of music genre and his giant stride in bringing about social change through it, expressed her joy for the very important recognition of her father’s effort. She eulogized the World-class company for refreshing participants at the event with its first-rate brands and the creativity introduced to make it more exciting.

Yeni praised the Fearless energy drink brand, stating that the award was the best thing that has ever happened since the inception of the Felabration.

She stated that the award is significant because it is from a leading brand that has been promoting human and economic development, especially in the entertainment industry, which is a burgeoning sector of Nigeria’s economy.

Similarly, Femi Anikulapo-Kuti, Fela’s eldest son, an Afrobeat musician, commended the Fearless energy drink brand of Rite Foods for sponsoring this year’s Felabration as talented artists energized by the leading brand came up with electrifying performances at the musical shows of the event.

The event’s highlight was the performance by D’Banj, a megastar in Nigeria’s musical industry, who thrilled the audience with one of his hit songs, “Top of the World.”

Other exciting activities include an Arts competition, Afrobics dance competition, schools’ debate with the topic “COVID-19 is a Blessing,” a Symposium themed “The National Question Evolution or Devolution” with the moderator/chairman, Femi Falana, amongst other prominent speakers. 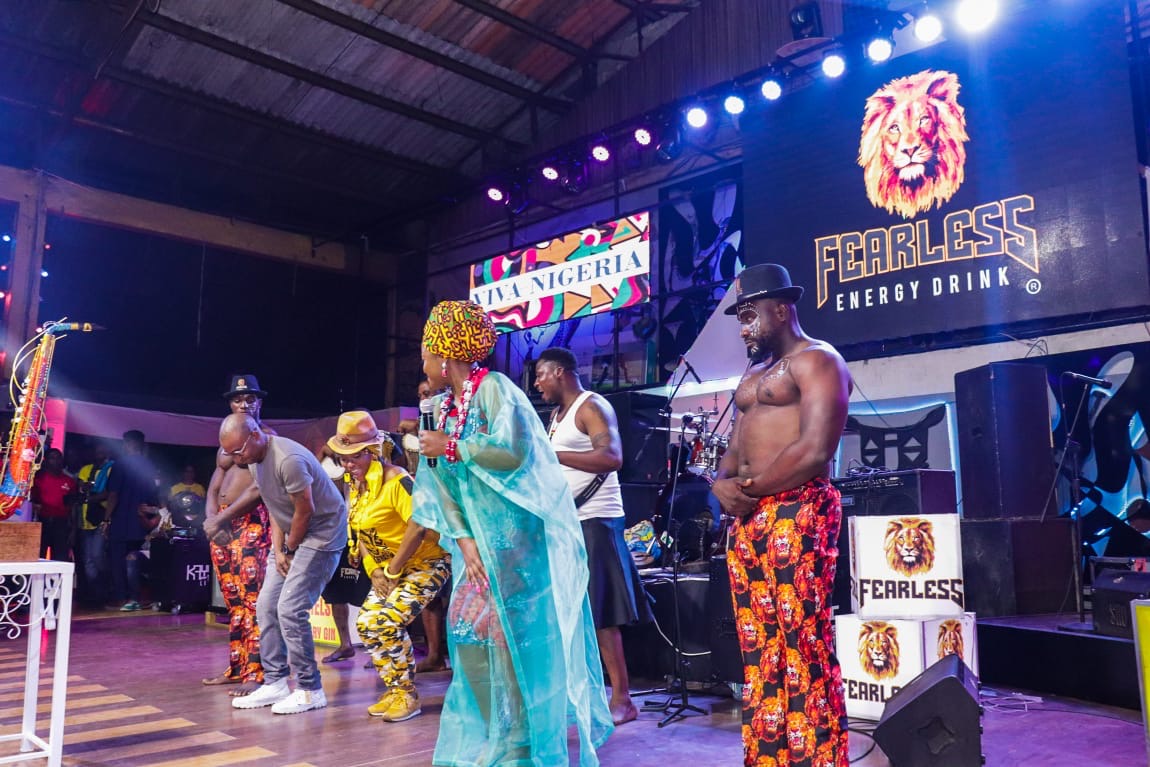 Resonating Fela’s positive energy is perhaps one of the most significant connections that the Fearless brand handlers cleverly delivered with the award. This connection many believe will positively work for the brand for a long time, especially if a sustainable angle can be established.

Brand Fearless and its handlers deserve some commendation for the unique sponsorship exploitation that took the shine off other sponsors at the grand finale of the event.

From concept to the day and timing of the award, the ownership of the entire sponsorship was taken by the brand as now being widely reported. This is a great achievement by Fearless energy drink and a good way to add value to platform sponsorship as a brand marketing asset.