Last night at the Convention Center of Eko Hotel & Suites in Lagos, Nigerian music royalty and the next generation of stars rocked the 2011 edition of the Hip-Hop World Awards – “The Headies“.

There were lots of hot performances including a nostalgic stage set by 2011 Headies Hall of Fame inductee Sir Shina Peters, Omawumi, Ice Prince and BrymO, M.I, Sound Sultan and songstress of the moment – Tiwa Savage.

M.I with the Choc Boiz

2Face Idibia ruled the winners list with 3 awards, M.I, Ice Prince (His labelmate BrymO featured on “Oleku”, the track which won the awards while Ice Prince also featured on another award winning track, JahBless‘ “Joor Oh” remix which won the Best Street Hop award), Darey and Dr SID won 2 awards respectively while Wizkid won one of the most coveted awards – The 2011 Headies Next Rated Award! In addition to his gong, he receives a brand new Hyundai Sonata as part of the award package.

Modenine maintained his unprecedented winning streak by winning the Lyricist on the Roll award for the sixth time.

The event was hosted by Nollywood star Rita Dominic and Hip-Hop Star eLDee who won the Best Conscious Song of the Year award and featured on the Best Street Hop award winning “Joor Oh” remix by JahBless.

Also always BN will bring you all the scoop and red carpet action soon.

ALBUM OF THE YEAR
Best album (solo or group) in year under review, that meets judges’ requirements of excellence (in realms as: songwriting, production, rendition and promotion) and acceptability (sales, popularity)
Unstoppable (International Edition) – 2Face Idibia

SONG OF THE YEAR
Most popular song released as a single or from an album in the year under review. Decided by voting
Oleku – Ice Prince featuring BrymO

RECORDING OF THE YEAR
Best single recording (On-air only or released) by artiste or group in year under review. Originality and production very essential
The Way You Are – Darey

PRODUCER OF THE YEAR
The individual responsible for producing the most acclaimed songs/album in the year under review. His CV for the year includes top-notch tracks and production credits no one can fault.
Don Jazzy – 2011 Credits include Over the Moon/Mr Endowed/Pop Something

HIPHOP WORLD REVELATION OF THE YEAR
Best New artiste in the year under review
Dr. SID 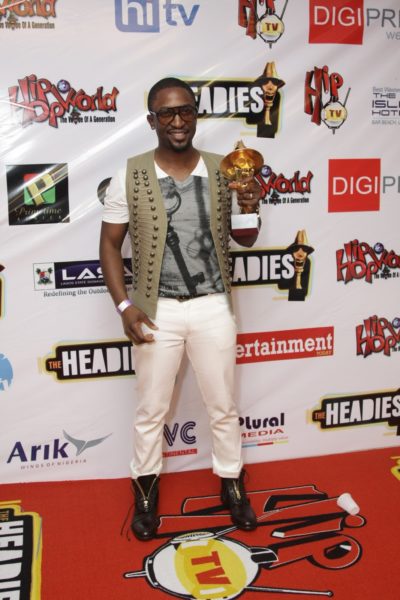