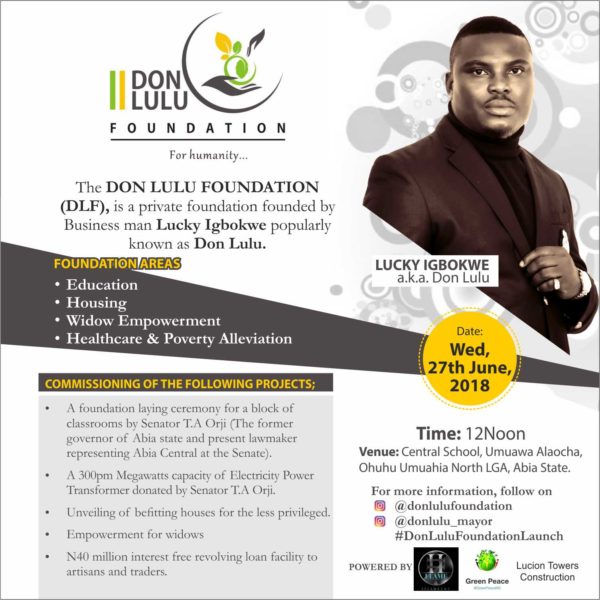 The DON LULU FOUNDATION (DLF), is a private foundation founded by business man Lucky Igbokwe. The foundation has been in existence for over 10 years, however, it will be officially launched on Wednesday, June 27, 2018, in Ohuhu Umuahia North Local Government Area of Abia State, Nigeria.

Don Lulu invites you, watch below:

The foundation aims at providing access to quality education to children, shelter to the less privileged, widow empowerment, healthcare and reduce extreme poverty especially in Abia State and Nigeria at large. The foundation is controlled by its trustees: Don Lulu- it’s Founder, a board of Trustees and other principal officers.

“DON LULU FOUNDATION has decided to launch its version of the Poverty Alleviation Program, to qualitatively transform the life and education of our children through our Back to School campaign and Scholarship Endowment Fund, Provision of Shelter to the less privileged, widow empowerment and the setting aside of a counterpart funding 40 million Naira interest free revolving loan facility to artisans, traders among other indigent members of the community.”- Lucky Igbokwe.

Education: Access to quality education through our Back to school campaign and establishment of the Scholarship Endowment Fund.

Housing: Provision of shelter and housing to the less privileged.

Widow Empowerment: Widows empowerment and the setting aside of a counterpart funding 40 million Naira interest free revolving loan facility to artisans, traders among other indigent members of the community.

The following projects will be commissioned on Wednesday:

More About Lucky Igbokwe:
Lucky Igbokwe (Don Lulu), is a United Nations Mayor for Peace, the Chairman of 2Flame Entertainment, CEO Lucion Towers Construction company, the Don Lulu Foundation and the Founder of Green Peace Nigeria. Don Lulu, is indeed a true visionary and a prominent indigene of Umuahia in Abia State who continuously works tirelessly to advance the cause of humanity in the state in particular and Nigeria in General. Through his entertainment company, he has organised concerts and promotions where Mavin Records Don Jazzy and Tiwa Savage as well as other artists including Omoba D’Prince, Morachi, Muno, Sheyman, and Exnel have performed, it has also recruited award-winning DJs including DJ Jimmy Jatt and DJ Kentalky for its promotional concerts within Nigeria. He has also signed on some of Nigeria’s top artists including Morachi, Yeka and others.

#WorldCup: ‘Psychic’ Cat predicts a Win for Nigeria in Match against Argentina