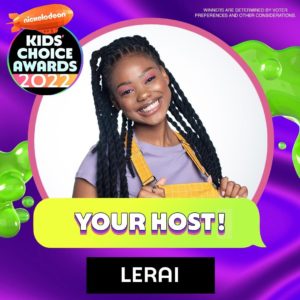 Lerai has been announced as the first-ever African host for the broadcast on the continent of the Nickelodeon Kids’ Choice Awards on NickToons.

The world’s biggest and slimiest award show, honouring the finest in television, movies, music, and sports as voted on by Nickelodeon network viewers across the world, is returning. Every year, the Nickelodeon Kids’ Choice Awards improve and return better than the previous year, and this year will be no exception. In a first for Africa, Lerai will be serving as the show’s host locally, stepping up as the companion to take Africa through the awards show and injecting some extra local flavour along the way.

“Lerai made history as the first African influencer and presenter for the channel when NickMusic launched in May 2021. She has now been named as the first African host of the Kids’ Choice Awards, which is incredible news. We will continue to support her in her growth and be a partner in driving her talent to new heights in her career,” says Monde Twala, Senior Vice President and General Manager for Paramount in Africa.

“It is incredible to see young African talent grow and represent the continent globally. Being selected to host the Nickelodeon Kids’ Choice Awards is a testament that our talent is on-par with the rest of the world. “We are proud to be the home of channels like Nickelodeon that promote African talent locally and globally,” said Georginah Machiridza, Executive Head of Content Strategy & 3rd Party Channels at MultiChoice.

“This has been such a wonderful way to begin the year; I’m delighted that my efforts have been recognized not only locally and across the continent, but have given me the opportunity to play a part in the global phenomenon that is the Nickelodeon Kids’ Choice Awards. This is a once-in-a-lifetime opportunity for me, and I am not taking it lightly. I’m grateful for the constant support I get from the team at Paramount, and for the love from all the Nick cheering fans,” NickMusic presenter, Lerai, stated.

Nickelodeon’s Kids’ Choice Awards bring children and families from all around the world together by giving them a place to celebrate their favourite personalities. Among the things to look forward to at the awards show are memorable performances, special moments, and appearances by some of the world’s best-known people.

Information about how fans in the African region can get involved and cast votes for their favourite will be announced in the coming weeks. Stay tuned to the official Kids’ Choice Awards website, KidsChoiceAwards.com, for updates.

Nikki Laoye & Snatcha’s Wedding Photos Are Giving Us All The Feels ?