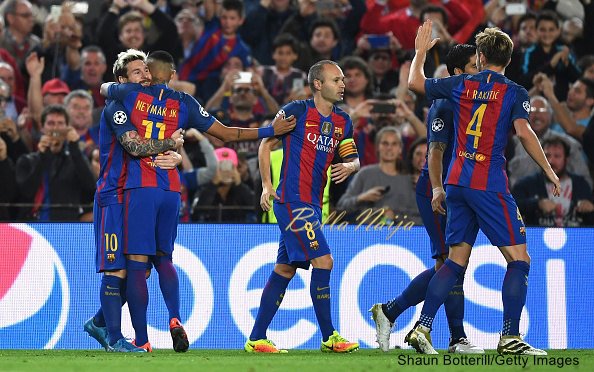 Lionel Messi’s 54th goal of the season inspired Barcelona to secure the Copa del Rey title for the third year running after beating Alaves to mark a winning send-off for coach Luis Enrique.

Enrique announced in March that he will quit the club after three years in charge at the Nou Camp.

Ibai Gomez hit the post for Alaves before Messi scored his 54th goal of the season with a 20-yard curler.

Moments later, Theo Hernandez bent in a free-kick to equalise, but Neymar scored from close range before Messi played in Paco Alcacer for the third on the stroke of half-time.

Barcelona had a disappointing season after they ended up runners-up to Real Madrid in La Liga on the last day of the league season and were eliminated from the UEFA Champions League by Juventus in the quarter-finals.

However, they did at least restore some pride with the victory over last season’s second division champions in what was the final match to be played at Atletico Madrid‘s Vicente Calderon Stadium.

Two major records were set along the way as Barcelona retained the trophy.

Messi became the first player to score in four Copa finals since Athletic Bilbao‘s Telmo Zarra in 1950 with his opener from outside the penalty area.

Neymar became the first man to score in three successive Copa finals since Ferenc Puskas, who achieved the feat with Real Madrid between 1960 and 1962.

With the victory, Messi and Iniesta have now won 30 trophies in the Barcelona shirt.

Barcelona has confirmed May 29th as the date to announce their new coach.

Watch Episode 11 of MTV Shuga: Down South – ‘Name and Shame’ on BN TV