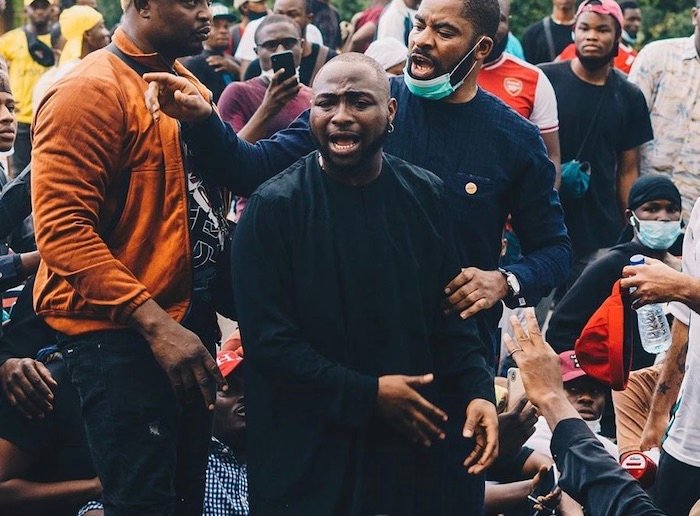 It’s been two weeks since Nigerian youths began pouring out into the streets. Their one demand? That the Special Anti-Robbery Squad, infamously known as SARS, be scrapped. This squad, a unit of the Nigerian Police Force, was originally tasked with detaining and prosecuting those involved in crimes like armed robbery and kidnapping. Now, people are fed up and coming out to protest peacefully across the country because the unit has gone rogue. The goal is simple: scrap this unit and, in the long run, implement police reforms.

Across decades, SARS has become identified with a dark cloud of terror as a series of cases of extortion, torture, harassment and extra-judicial murder have moved from being faint rumbles to un-ignorable loud cracks deafening the populace. If you listen closely, you’ll hear a pushback, and it is soundtracked by shouts of defiance, angst & a slew of pop culture insertions.

The demands young Nigerians are making are nothing new. Since 2016, people have documented the abuse SARS has meted out. More often than not, these cases either get swept under the rug, or trigger imaginary overhauls announced by the government. Well, not anymore.

With more decentralised protests popping up across the map, we’re seeing a shift from regular chants to a mix of new slogans bellowed alongside popular tunes. It is safe to say that Nigerian music is playing a pivotal role in the fight against SARS for these young people. It is reminiscent of the way the Black Lives Matter movement became intertwined with Kendrick Lamar’s prophetic chants of We gon’ be alright from his 2015 “To Pimp a Butterfly” album.

One of the songs that has gotten massive airplay and may be referred to as the unofficial anthem is Davido’s “Fem.” The song was released almost a month ago, after the musician, who has been vocal about the protests, ended a social media break. The song became an instant hit, especially as it was speculated to be some form of broadside delivered at Burna Boy, who, ironically, had a protest-ready anthem, “Monsters You Made,” snubbed over his perceived reluctance to align with the protests initially.

With lyrics like E be like you don dey talk too much, Small talk you don dey talk who talk that can be addressed to the Nigerian government and its empty promises on the SARS menace, “Fem” has become a crowd favourite complete with the hand signalling a “shut up your mouth” when it is being played. There’s a viral video of the Lagos State governor, Babajide Sanwo-Olu, addressing protesters in Alausa (his seat of office), only to be silenced by the song blasted by a DJ and the frenzied crowd shouting and gesturing fem at him.

Asides “Fem,” another song that has been a constant feature at these protests is “Barawo” by Afrobeats duo, Ajebo Hustlers. Originally released in July, the catchy tune talks about jungle justice, corruption and police brutality—all huge protest themes. It is also very timely that in the heat of the protests, Davido joined his voice to a remix of this song, consciously re-sounding lines like The masses they para cos raba no dey and This country na wa to the ears of listeners.

Burna Boy’s “Monster You Made,” with Coldplay’s Chris Martin, from the allegedly Grammy-bait “Twice as Tall” album, has fallen foul of the crowds because it seemed his position as a conscious artist was more fumes than flame at the onset of the protests. However, with recent developments, including him adding his voice to the protests online and mounting billboards in town, his song has crawled back to be part of some of the peaceful protests, mostly for the Calling me a monster, just ’cause we said no way, no way, no way… we are the monsters you made lyrics.

While all of these are going on, there’s a litany of very conscious classics making waves with the protests. These include African China’s “Mr President,” Eedris Abdulkareem’s “Jaga Jaga,” Asa’s “Jailer,” Falz’s cover of Childish Gambino’s “This is Nigeria” and a host of other songs by Fela Anikulapo-Kuti. Each of these songs has found a way to spur on protesters who are committed to not backing down until their needs are met.

Ultimately, the protests are a reality Nigeria must accept. The revolution may not be televised, as Gil Scott-Heron foretold, but Nigerian youth will keep expressing themselves precisely how they know to, with music being smack in the centre of things. It may be noisy to some, apt to others, but it will go on until the government realises it’s not dictating the tune anymore.